Has NASA Called the Image of the Virgin of Guadalupe 'Living'?

Scientists from the National Aeronautics and Space Administration have not announced that "Our Lady of Guadalupe", a religious artifact, is alive. 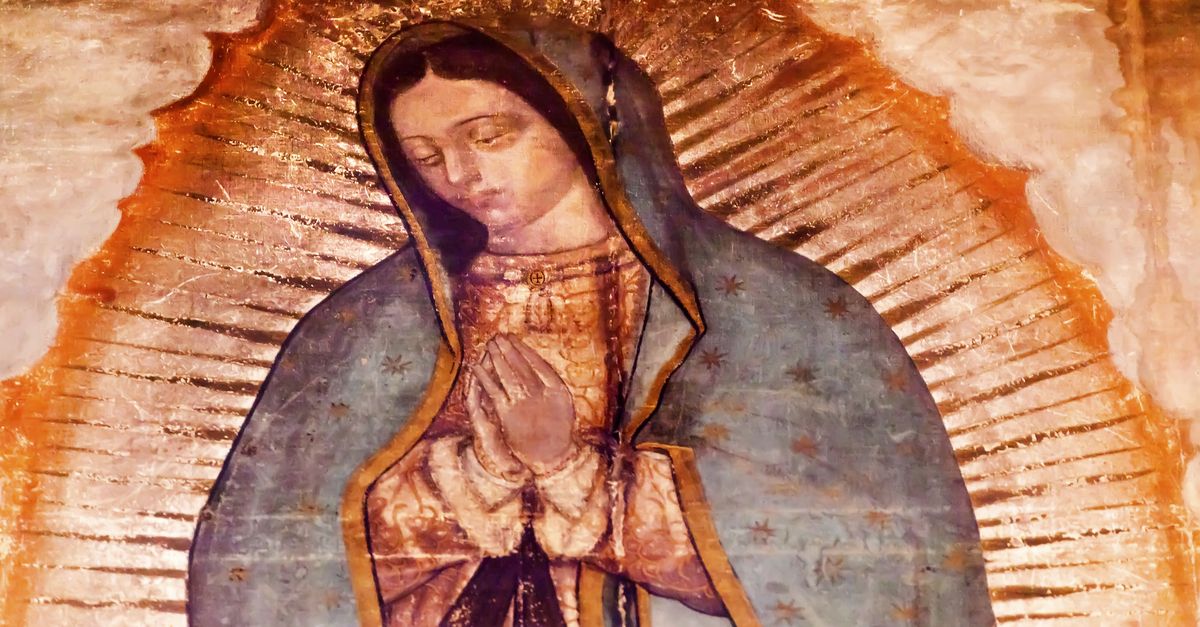 Claim:
In August 2017, NASA scientists declared that Mexico's "Our Lady of Guadalupe" artifact is "living."
Rating:

In August 2017, two links circulated on social media that suggested that NASA had announced it had deemed Mexico City's Our Lady of Guadalupe tilma (a cloak or mantle made of cactus fiber upon which her face is said to be imprinted) to be "living", in that the image reacts to outside stimuli.

Social media users shared links from RCatholics.com and Matrix Drops, the former dated 7 August 2017 and the latter with no easily discernible date. Together, the viral items suggested that indeed a discovery of some sort had taken place in early August 2017: The Matrix Drops link was not published in 2017, but instead dates back to at least 2015. It may have been shared in lieu of RCatholics.com's iteration (complete with a "breaking news" graphic) which didn't even mention NASA, but had a passage claiming that it has qualities that are "humanly impossible" to replicate:

Phillip Callahan, a biophysicist at the University of Florida, discovered that the differences in texture and coloration that cause cause Our Lady’s skin to look different up close and far away is impossible to recreate[.]

The tilma has shown characteristics startlingly like a living human body.

In 1979, when Callahan, the Florida biophysicist, was analyzing the tilma using infrared technology, he apparently also discovered that the tilma maintains a constant temperature of 98.6 degrees Fahrenheit, the same as that of a living person.

Callahan's original analysis is not readily available, but reviews of the decades-old infrared photography examination of the piece carried out by him did not conclude that the material was metaphysical in origin. A 2010 Skeptoid item summarized Callahan's findings less sensationally (transposing the date of the research in 1979 [PDF] with its publication in 1981), adding that subsequent analysis did not support any supernatural elements:

The most notable examination was a three hour infrared photographic session by Philip Callahan in 1981, who did note multiple layers of paint covering changes to the hands and crown, but came away with more questions than answers. Callahan found, for example, that most of the entire painting seemed to have been done with a single brush stroke. He recommended a series of more tests, but the only one allowed by the Church was a spectrophotometric examination done by Donald Lynn from the Jet Propulsion Laboratory. The only result released of his examination was that "nothing unusual" was found.

Until the claim was picked up by RCatholics.com on 7 August 2017, no one attributed details like the tilma's purported temperature to Dr. Callahan or his 1979 research. Matrix Drops cited a 20 December 2011 story for its claims that "NASA scientists" had determined the Virgen de Guadalupe to be alive. That material cited an unlinked source and appeared to form the basis of both circulating claims (translated)

The picture was also examined with a stethoscope, at which time scientists found a heart rate of 115 at her belly, corresponding to a pulse rate of a fetus.

NASA engineers have also found that the paint with which the image was made does not exist and never existed anywhere on earth - writes Tsn.ua's internet news portal.

The claim that "NASA scientists" had affirmed the supernatural nature of the sacred image dates back as far as a 2001 column penned by Peggy Noonan, but the 2011 iteration appears to have been a complete fabrication with no supporting evidence for its extraordinary claims. Research carried out by Callahan for the Center for Applied Research in the Apostolate (CARA, a religious organization) in 1979 in no way amounts to evidence in 2017 that the piece is "living," has a heartbeat, or maintains a temperature identical to that of the human body.

NASA released no research in 1979 or at any other time about the artifact, and even Callahan's believer's lens of interpretation made no claims that the materials from which it was created were of no known origin. But in 2002, Skeptical Inquirer noted that subsequent study had unraveled some of the tilma's mysteries:

... infrared photographs show that the hands have been modified, and close-up photography shows that pigment has been applied to the highlight areas of the face sufficiently heavily so as to obscure the texture of the cloth. There is also obvious cracking and flaking of paint all along a vertical seam, and the infrared photos reveal in the robe’s fold what appear to be sketch lines, suggesting that an artist roughed out the figure before painting it. Portrait artist Glenn Taylor has pointed out that the part in the Virgin’s hair is off-center; that her eyes, including the irises, have outlines, as they often do in paintings, but not in nature, and that these outlines appear to have been done with a brush; and that much other evidence suggests the picture was probably copied by an inexpert artist from an expertly done original.

In fact, during a formal investigation of the cloth in 1556, it was stated that the image was “painted yesteryear by an Indian,” specifically “the Indian painter Marcos.” This was probably the Aztec painter Marcos Cipac de Aquino who was active in Mexico at the time the Image of Guadalupe appeared.

In 1985, forensic analyst John F. Fischer and I reported all of this evidence and more in “a folkloristic and iconographic investigation” of the Image of Guadalupe in Skeptical Inquirer. We also addressed some of the pseudoscience that the image has attracted. (For example, some claim to have discovered faces, including that of “Juan Diego” in the magnified weave of the Virgin’s eyes-evidence of nothing more than the pious imagination’s ability to perceive images, inkblot-like, in random shapes) (Nickell and Fischer 1985).

Recently our findings were confirmed when the Spanish-language magazine Proceso reported the results of a secret study of the Image of Guadalupe. It had been conducted - secretly - in 1982 by art restoration expert José Sol Rosales. Rosales examined the cloth with a stereomicroscope and observed that the canvas appeared to be a mixture of linen and hemp or cactus fiber. It had been prepared with a brush coat of white primer (calcium sulfate), and the image was then rendered in distemper (i.e., paint consisting of pigment, water, and a binding medium). The artist used a “very limited palette,” the expert stated, consisting of black (from pine soot), white, blue, green, various earth colors ("tierras”), reds (including carmine), and gold. Rosales concluded that the image did not originate supernaturally but was instead the work of an artist who used the materials and methods of the sixteenth century (El Vaticano 2002).

In addition, new scholarship (e.g. Brading 2001) suggests that, while the image was painted not long after the Spanish conquest and was alleged to have miraculous powers, the pious legend of Mary’s appearance to Juan Diego may date from the following century. Some Catholic scholars, including the former curator of the basilica Monsignor Guillermo Schulemburg, even doubt the historical existence of Juan Diego.

We contacted NASA to ask about the rumor, but have not yet received a response. However, the legend's trajectory over the years indicated that its origins lay not with NASA, but with an unreliable and unsupported item published in 2011, three decades after Callahan's analysis appeared in print).

Leatham, Miguel.   "Indigenista Hermeneutics And The Historical Meaning Of Our Lady Of Guadalupe Of Mexico ."     Folklore Forum.   1989.