Is This a Vampire Squid Turning Itself Inside Out?

A video showing a cephalopod contorting to confuse predators ended up confusing some viewers, as well. 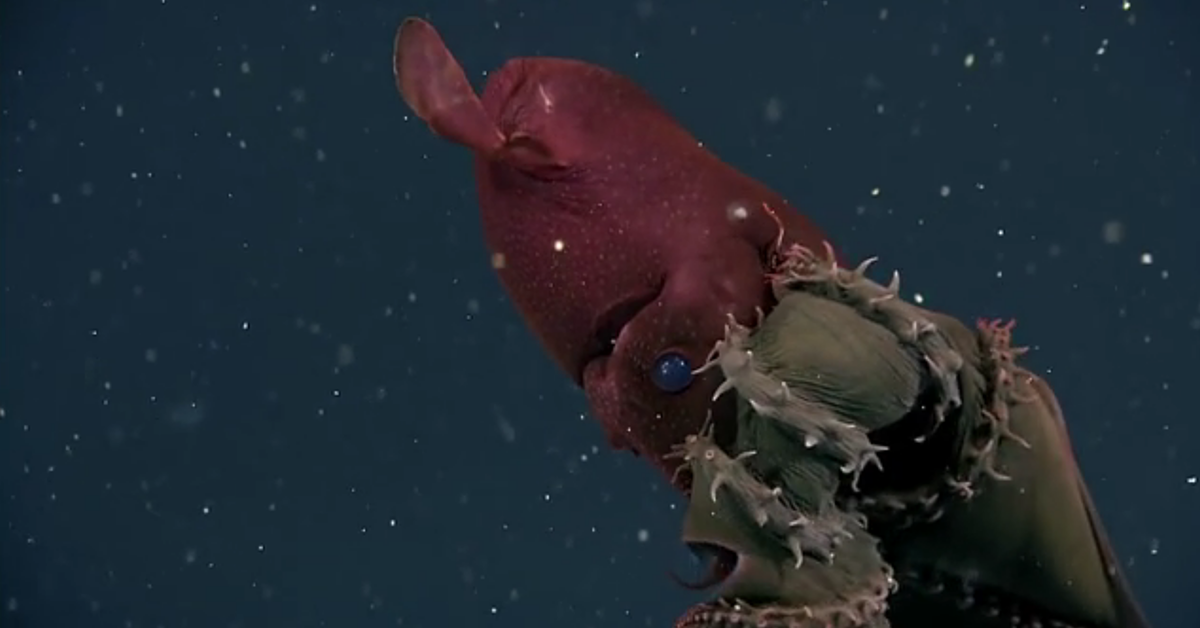 Claim:
A video shows a vampire squid turning itself inside out, revealing sharp barbs on the underside of its hood.
Rating:

A video showing a vampire squid turning itself "inside out" is real.

The "sharp barbs" on the underside of its hood are actually soft and relatively harmless; the colors in the video were digitally enhanced.

An animated image purporting to show a vampire squid turning itself inside out, exposing a series of sharp barbs on the underside of its hood, was posted to Reddit in May 2018:

The Vampire Squid, named for its blood red color, can nearly turn itself inside out to avoid predators, revealing sharp barbs on the inside of its "hood."

The pictured deep sea creature is a vampyroteuthis infernalis, which literally translates to "vampire squid from hell."

Although this name may imply that the vampire squid is some sort of nightmarish bloodthirsty beast, the claim attached to this video is false. The "sharp barbs" on the underside of its hood are actually soft and relatively harmless. The vampire squid is also a scavenger, not a predator:

In a recent article in the Proceedings of the Royal Society B: Biological Sciences, Hoving and Robison show that vampire squids eat mostly "marine snow" — a mixture of dead bodies, poop, and snot. The dead bodies are the remains of microscopic algae and animals that live in the waters farther up in the ocean, but sink down into the depths after they die. The poop consists of fecal pellets from small, shrimp-like animals such as copepods or krill. The snot is mostly debris from gelatinous animals called larvaceans, which filter and consume marine snow using mucus nets.

This video does show a real vampire squid (as opposed to being a CGI mock-up) but the colors in this viral footage were digitally enhanced. It was taken by the Monterey Bay Aquarium Research Institute (MBARI), and was featured in a 2014 video published on the YouTube page "Science Friday." A slightly cropped version of this GIF can be glimpsed at the 2:30 mark of the following video:

A spokesperson for MBARI told us that the footage was taken by the organization's remotely operated vehicle Ventana on 25 April 2008, at a depth of 566 meters in Monterey Bay, California.

Some large fishes and diving predators are known to eat vampire squids. Unlike shallow-water squids and octopuses, vampire squids do not expel black ink to escape predation. In the darkness of the mesopelagic zone, black or dark purple ink would not be effective. Instead the vampire squid expels a colorless substance that contains numerous particles of bioluminescent (light-producing) material. These twinkling lights confuse potential predators.

It is easy to see why this creature was given the name "vampire squid from hell" when it was first pulled from the ocean's depths. In the ensuing years, however, researchers have discovered that this title is not very appropriate — as a matter of fact, this "squid" isn't even a squid at all. The vampire squid is the sole member of the Vampyromorpha order of cephalopods, and is believed to be an ancient link between the octopus and squid:

Vampire squid also occupy a strange evolutionary position. They are so unusual they command their own order, a very high level of taxonomic organization. They have eight arms and fins on their head like an octopus, but they also have two long squid-like feeding filaments they use to catch and retrieve marine snow. As a result, scientists think vampire squid are extremely ancient, and may represent some of the only living descendants of the common ancestors of both octopus and squid that lived more than 200 million years ago.

Correction [9 May 2018]: Updated to note that the colors in the viral gif have been digitally enhanced.