Is This 'Skeleton' Guitar Real?

If cartoons have taught us anything, skeletons are traditionally used to make xylophones, not guitars. 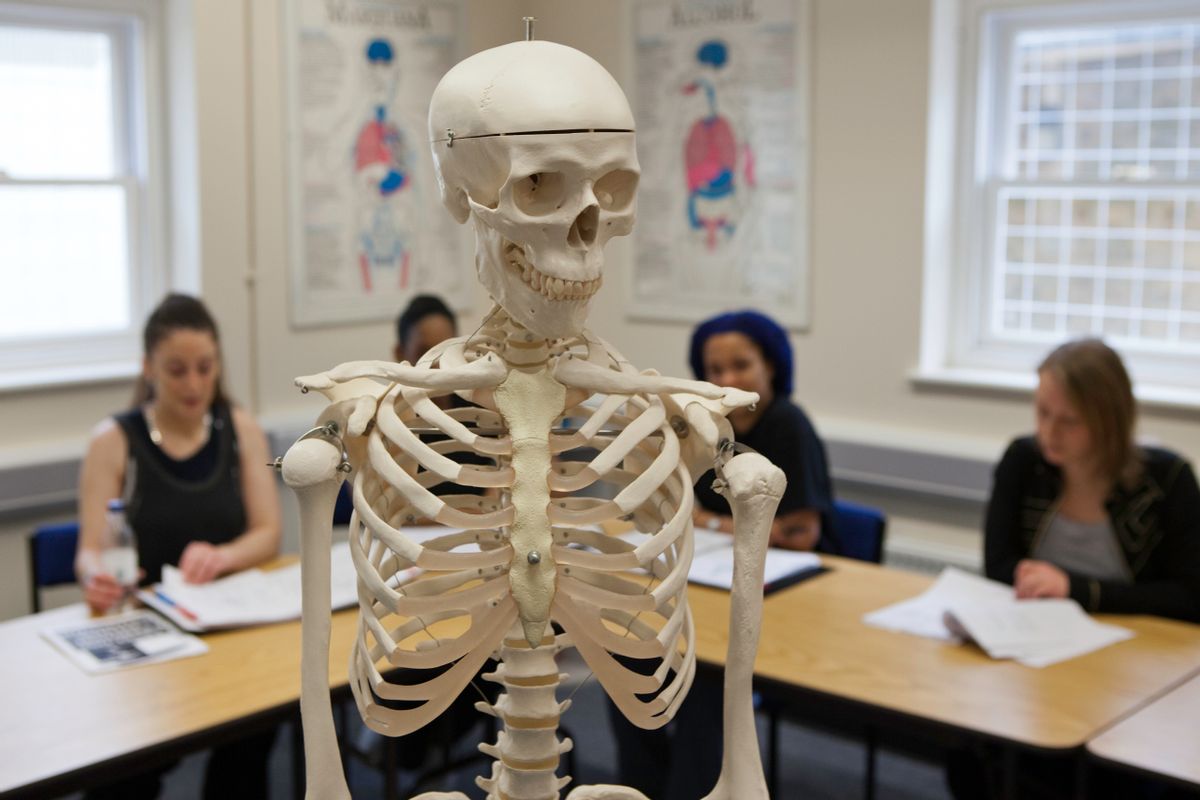 Image Via In Pictures Ltd./Corbis via Getty Images

Claim:
Photographs show a guitar made from part of a skeleton dubbed a "skelecaster."
Rating:

In February 2021, a photograph supposedly showing an electric guitar made from a human skeleton, dubbed a "skelecaster," went viral on social media: This is a genuine photograph, but we're not sure if it's a genuine skeleton.

The man pictured is a Florida musician known as "Prince Midnight." On Jan. 26, 2021, Prince Midnight told his followers on Instagram that he was attempting to turn his uncle Filip's skeleton into a guitar.

The musician claimed that his uncle's remains were donated to a school in Greece after he died in a car crash in the 1990s. Recently, however, the school decided that it was no longer going to use real skeletons in its education programs and returned the remains to Filip's family. The Greek Orthodox family opposed cremation, Prince Midnight wrote, and burying the remains proved expensive. So, he came up with a solution: He would turn the skeleton into a guitar.

So, my uncle Filip died in the 90’s and donated his body to science. However, the schools in Greece discontinued using actual skeletons and he ended up in a box in a cemetery that the family has had to pay rent on (permanent grave was $150,000) So, we finally made the move to bring him to the US. Happy to be reunited!

As many of you know, my uncle Filip was a big metal head and very influential to me growing up. Since repatriating his remains, I’ve struggled with what to do with them. I have decided that I will be turning uncle Filip into the first actual human skeleton guitar so he can continue to shred forever #skeletonguitar

Over the next few weeks, Prince Midnight documented what he said was the process of turning the skeletal remains into a heavy metal instrument. The musician said that he had to run a steel rod through the entire spine because Filip's skeleton was too rickety. He also noted that drilling through bone smelled worse than soldering wires.

On Feb 10, he posted a video of the supposedly showed the skelecaster in action:

Prince Midnight's account did not include too many specific details that we could fact check. We don't know uncle Filip's full name, for instance, nor the school where his remains were stored for the last two decades.

Who would go through [with making a fake skeleton guitar] just to prank the news?

I mean, sure, there is one guy, Odilon Ozare, the Tampa resident who holds the Guinness world records for world’s tallest hat and longest acrylic nails. Ozare has been similarly accused of creating a fake persona as a dandy hatmaker to get on the news, and he bears a striking resemblance to Prince Midnight, who also bears a striking resemblance to Justin Arnold, the Tampa resident who once pranked tbt* newspaper into publishing a photo of a two-headed alligator on the cover.

We reached out to Prince Midnight to clarify some of the details of his story. What was his uncle's full name, we asked. What Greek school had possession of his remains for the last 20 years? Prince Midnight responded: "Check out my ep on Spotify!"

While we can't say for certain that this skeleton guitar is a hoax, it certainly seems like a promotional stunt.

Correction [11 February 2020]: Status changed from True to Unproven. Misspelling of uncle Filip's name has been corrected.