This is not the first bad-faith attempt to connect the LGBTQ community to pedophilia. 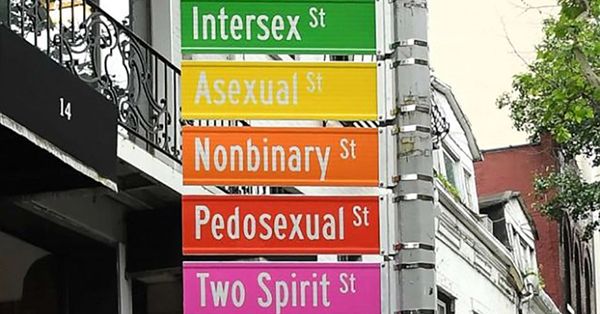 The idea that homosexuality is somehow linked to pedophilia has been repeatedly debunked over the last few decades. Still, attempts to demonize the LGBTQ community in this manner frequently go viral on social media. In December 2017, for instance, a homophobic smear campaign started on internet message boards such as 4chan attempted to convince unsuspecting social media users that a "P" for "Pedosexual" had been added to the LGBTQ acronym.

We encountered a similar hate hoax during Pride Month in June 2019. Shortly after a new "Acceptance Street" sign listing various sexual orientations was unveiled in New York City, a photograph of the sign was doctored to make it seem as if "pedosexual" was one of the accepted orientations of the LGBTQ community: This is not a genuine photograph.

The original image featured the word "Pansexual," a term referring to a person "who is attracted — either emotionally, physically or both — to all genders," not the word "pedosexual."

Here's a video from NYC Human Rights that shows the original sign:

The moment we’ve all been waiting for! Check out the new Acceptance Street #AcceptanceMatters pic.twitter.com/uUy25N92k0

Good Morning America reported that the "Acceptance Street" art installation was unveiled at the intersection of Gay Street and Christopher Street and will remain in place until at least the end of Pride Month:

The historic and popular Gay Street and Christopher Street in the West Village neighborhood of Manhattan was renamed "Acceptance Street" Monday morning.

The all-inclusive street sign installation was championed by the New York City Commission on Human Rights and was underwritten by Mastercard.

The core message? No matter who or how you love, you are welcome here on "Acceptance Street," representative of all walks of life.