Is This Carl Sagan Holding a 'No Billboards in Space' Sign? 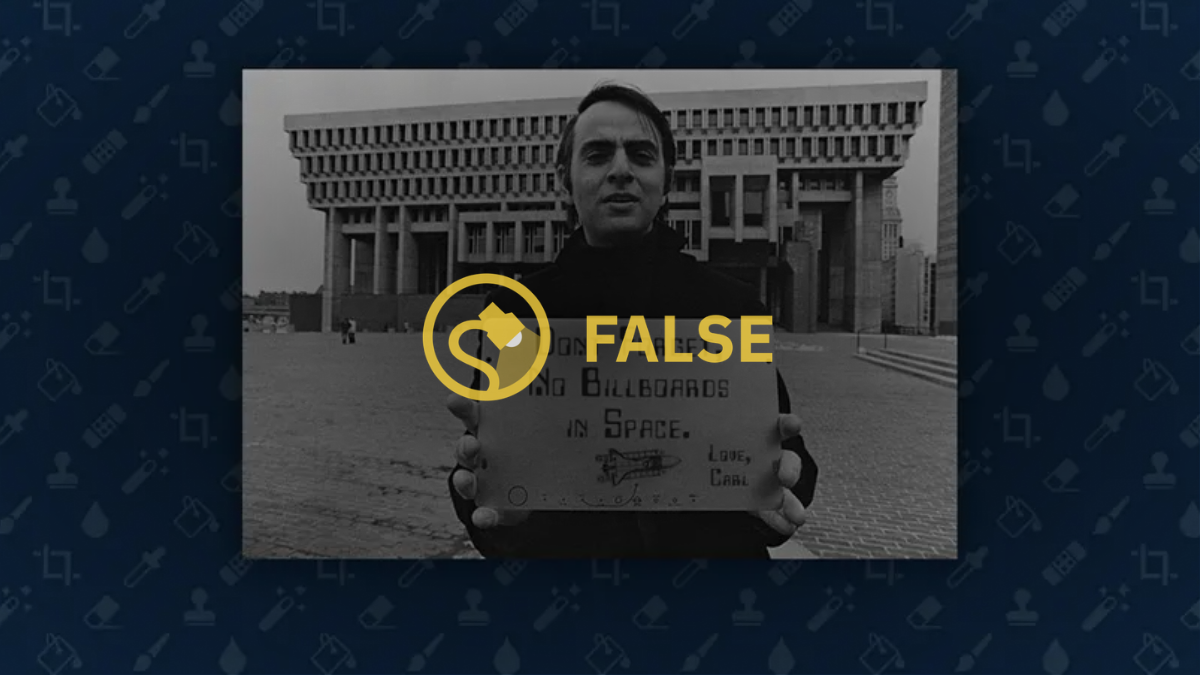 When Elon Musk launched the Falcon Heavy rocket (and its payload of a Tesla Roadster) in February 2018, many saw it as a giant step toward commercial space travel and sending a human to Mars.

Others saw something slightly more cynical, namely a giant advertisement:

Elon Musk pulled off a double marketing coup with the first successful test launch of his Falcon Heavy rocket, the flagship of his private space-flight company SpaceX, and the subsequent debut of its payload—a Tesla Roadster driven by a dummy nicknamed Starman—as the first car in space.

While the launch was clearly one of the most dramatic moments of livestreaming in recent memory, it’s the live YouTube feed of Musk’s own cherry-red Roadster circling the Earth that will perhaps generate the biggest publicity boost for Musk’s emerging electric-car company. With a famously nonexistent ad budget, Tesla just secured a place in auto marketing history.

In the wake of this monumental achievement of advertising, a photograph purportedly showing a disapproving Carl Sagan holding a "No Billboards in Space" sign started recirculating on the internet: This photograph has been circulating online since at least 2010. A Redditor claimed in a 2011 posting of the image that they had created it for a photoshop contest on the web site Fark, but we were unable to locate the original contest.

Regardless, this has image has been doctored. The original image showed Sagan holding one of the "Pioneer Plaques," not a sign reading "No Billboards in Space."

The Pioneer Plaques were launched into space in the early 1970s aboard the Pioneer 10 and Pioneer 11 spacecrafts. The idea was that the plaques, which contained a pictorial message, would relay some information about the spacecraft's origins in case it was intercepted by an extraterrestrial life form: It seemed to us appropriate that this spacecraft, the first man-made object to leave the solar system, should carry some indication of the locale, epoch, and nature of its builders. We do not know the likelihood of the Galaxy being filled with advanced technological societies capable of and interested in intercepting such a spacecraft. It is clear, however, that such interception is a very long term proposition.