Is This an Asian Giant Hornet?

Asian giant hornets are real, and large, insects — but a viral photograph purporting to show one actually features a movable insect model. 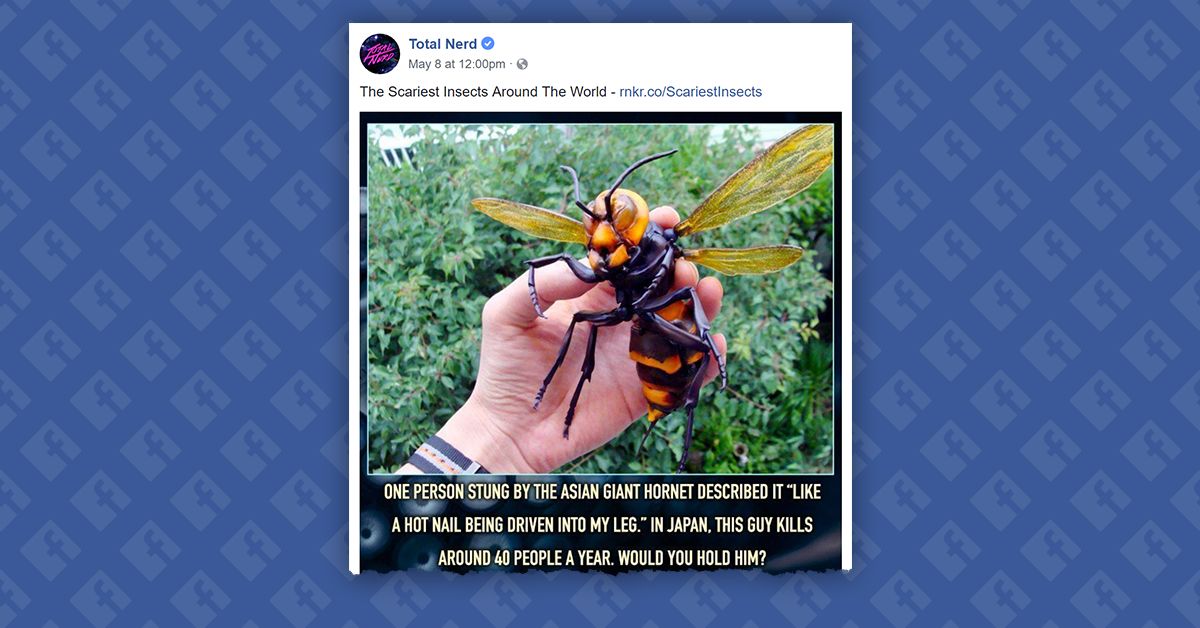 An image purporting to show an "Asian giant hornet" is occasionally featured on lists about the most dangerous insects on the planet. The suspicious photograph is also featured in a popular meme (with a claim that this insect kills dozens of people people a year) and received a boost in popularity in May 2018, when it was shared on the Facebook page for comedian Martin Lawrence: One part of the claim is true. The Asian giant hornet is a real insect, and it does have a (potentially) deadly sting. However, the "insect" featured in this meme is actually a movable painted model created by "Mushibuchi," a Japanese artist who creates and sells a variety of toy sculptures.

Although the image may resemble a genuine insect at first glance, Mushibuchi has posted several other images which clearly show that the hornet is a model: Mushibuchi's Twitter feed is full of photographs which show the creation of these models. Although we could not find any images showing the development of this specific hornet, Mushibuchi documents other toy insects on their journeys from digital rendering to 3D printed object to a realistically painted model:

The featured toy model is much larger than a real Asian giant hornet, which only grow to about two inches long — large for a hornet, but not nearly as big as the model:

It is also true that their stings can be deadly. Shunichi Makino, director general of the Hokkaido Research Center for Forestry and Forest Products Research Institute in Japan, told CNN that the hornet kills a few dozen people every year:

The Asian giant hornet, known scientifically as Vespa mandarinia, carries a venom that destroys red blood cells, which can result in kidney failure and death, said Justin O. Schmidt, an entomologist at the Southwest Biological Institute in Tucson, Arizona.

But perhaps a bigger problem than the toxicity of the venom is allergy, Schmidt says. Some people are naturally more allergic to stinging insects than others; a sting can trigger a deadly anaphylactic reaction, which may involve airway closure or cardiac arrest.

About 30 to 50 deaths are reported each year in Japan from such attacks, according to Japanese studies. Most of the deaths are due to allergies to the venom, Makino said.

The giant hornets are also destructive to western honeybees. Research in Japan suggests that tens of thousands of honeybee hives are damaged by the giant hornets each year.