Is the 'Penis Snake' a Real Animal?

Yes, but it's not really a snake. 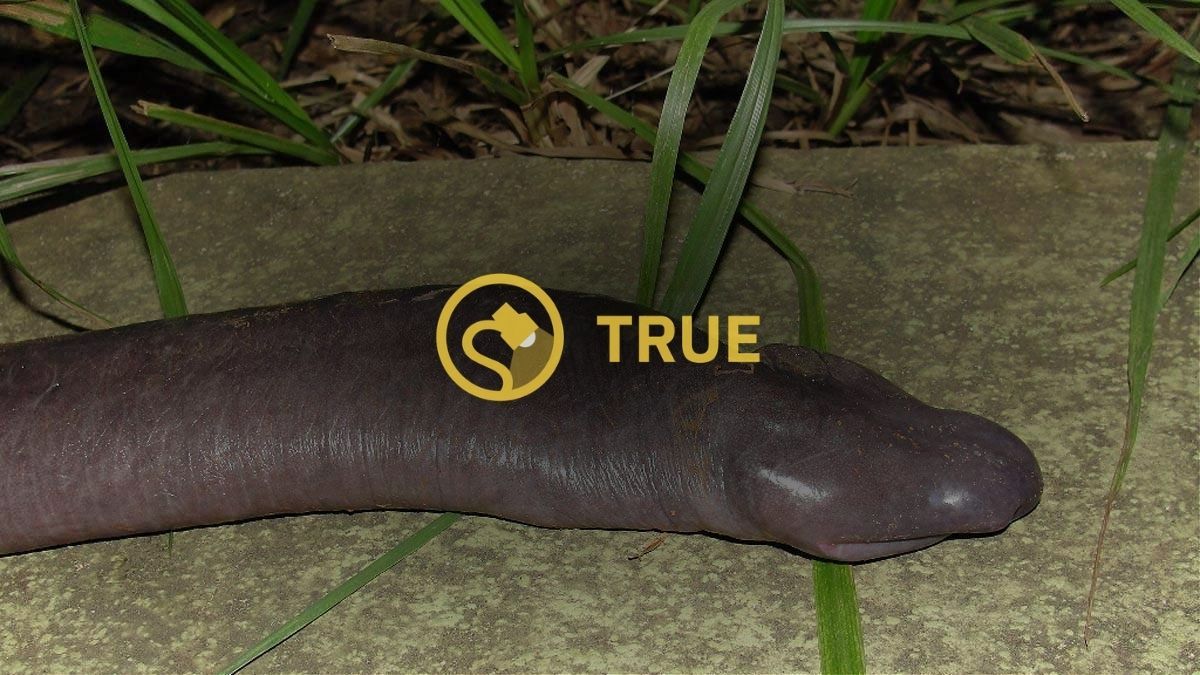 Claim:
A photograph of a "penis snake" features a real animal.
Rating:

Pictures of phallic-shaped objects are a surefire way to get the internet to snicker, which is probably why we've been asked about penis-shaped islands, plants, rocks, and Christmas lights. In November 2021, photographs of another another dick doppelganger made their way around social media, this time supposedly showing a "penis snake."

These are genuine photographs of a real animal. While these pictures often make their way around the internet attached to names like "penis snake," "floppy snake," or "man-aconda," this creature's proper name is Atretochoana eiselti. And while this animal's internet nicknames would lead some to believe that these photos show a sort of phallic-looking snake, this animal is actually a species of caecilian, a group of limbless amphibians.

We haven't been able to source both of the above-displayed pictures, but the top photograph was taken in 2011, when a large caecilian had been collected at the bottom of the Madeira River in Brazil after a portion of the river was drained for a construction project. Here's an excerpt from the paper published in the Brazilian scientific journal, Boletim do Museu Paraense Emílio Goeldi: Ciências Naturais, where this photo was published:

On August 8, 2011, the senior author was contacted by the junior author JTC who sent him some very good pictures of a large caecilian that had been collected on August 1, 2011 in the bed of the Madeira river, in Cachoeira Santo Antônio (Figure 2A), in a pool at an altitude of 4 m below sea level, at the construction site of a hydroelectric project, in an area of the river bed at the left bank of the Madeira river that had been closed off upstream on July 30, 2011 and was drying out (Figure 2C, D). The land along the Madeira river at the site has an elevation of about 50 m above sea level. From the pictures received it was immediately clear that this was a specimen of A. eiselti, that agreed very much with the published pictures of the holotype and the second known specimen. This specimen fortunately was collected and directly preserved in alcohol 70% (no formalin fixation), and we have initiated molecular studies of tissue samples to evaluate the relationships of this species with other typhlonectids. The specimen has been deposited in the herpetological collection of the Museu Paraense Emílio Goeldi, Belém, Pará, Brazil (MPEG 33292). On August 4, 2011, three additional, smaller specimens (estimated to be 30-40 cm total length) were collected at the same spot as the first specimen. One of these individuals was extensively photographed (Figures 2B and 3D) and the three specimens were released again in the Madeira river.

The "penis snake" in this photo is an adult female A. eiselti that measured just under 40 inches. This specimen was preserved and later dissected by the researchers as they attempted to learn more about this rare species.

Brazilian biologist Juliano Tupan, one of the researches who wrote this paper, said:

“Of the six we collected, one died, three were released back into the wild and another two were kept for studies. Despite looking like snakes, they aren’t reptiles and are more closely related to salamanders and frogs ... The Amazon is a box of surprises when it comes to reptiles and amphibians. There are still much more to be discovered.”

Additional photos of this A. eiselti can be seen here. Below are alternative angles showing the head of this large caecilian: A paper published in the Biological Journal of the Linnean Society in 1997 provided another photograph of this odd-looking animal's head. While the viral photos of this animal often get shared because of their phallic familiarities, this animal's appearance may not be the most interesting thing about A. eiselti. This is also the only caecilian that doesn't have lungs.

The Scientific American notes that A. eiselti was first described in 1968. While a handful of other specimens have been collected since then, scientists didn't know much about these strange creatures for decades, including how they breathed. In 2011, Tutan and his fellow researchers found that these creatures likely obtain oxygen through the capillaries near the surface of their skin.

Commonly known as 'floppy snakes', A. eiselti has a flat, widened head with two sealed, internal nostrils called choanae, and a complete lack of pulmonary arteries and veins. Lunglessness like A. eiselti's is usually restricted to small species of salamanders and a small Bornean frog called Barbourula kalimantanensis, so the fact that A. eiselti is so much larger than any of these is a real surprise. Together with its lack of open nostrils, A. eiselti's lunglessness has posed quite a problem for scientists, because no one has been able to figure out how it obtains oxygen from its watery surroundings.

What this species does have, however, are capillaries that sit very close to the skin - there's only about two or three cells between its blood and the surface of its skin, according a 2011 Boletim do Museu Paraense Emílio Goeldi paper by a team of Brazilian biologists including Tupan. What this could mean, the team suggested, is that the only way for this species to obtain oxygen from the water is through its skin: "Possibly the wrinkles in the skin serve to increase total skin surface in order to facilitate skin respiration...". This is the case in the Lake Titicaca frog (Telmatobius culeus), commonly known as the 'scrotum frog', and the hellbender salamander, or mud dog' (Cryptobranchus alleganiensis). Still, the team says, as some turtles breathe through their cloacal openings, this possibility can't be ruled out for A. eiselti. A bald butt-breather. Say it isn't so.