Is Laura Phelps a Crisis Actor Who Lost a Child at Both Sandy Hook and Marjory Stoneman Douglas?

A conspiracy theory accusing Nick and Laura Phelps of being "crisis actors" received a new (and false) twist in the aftermath of the Parkland, Florida school shooting. 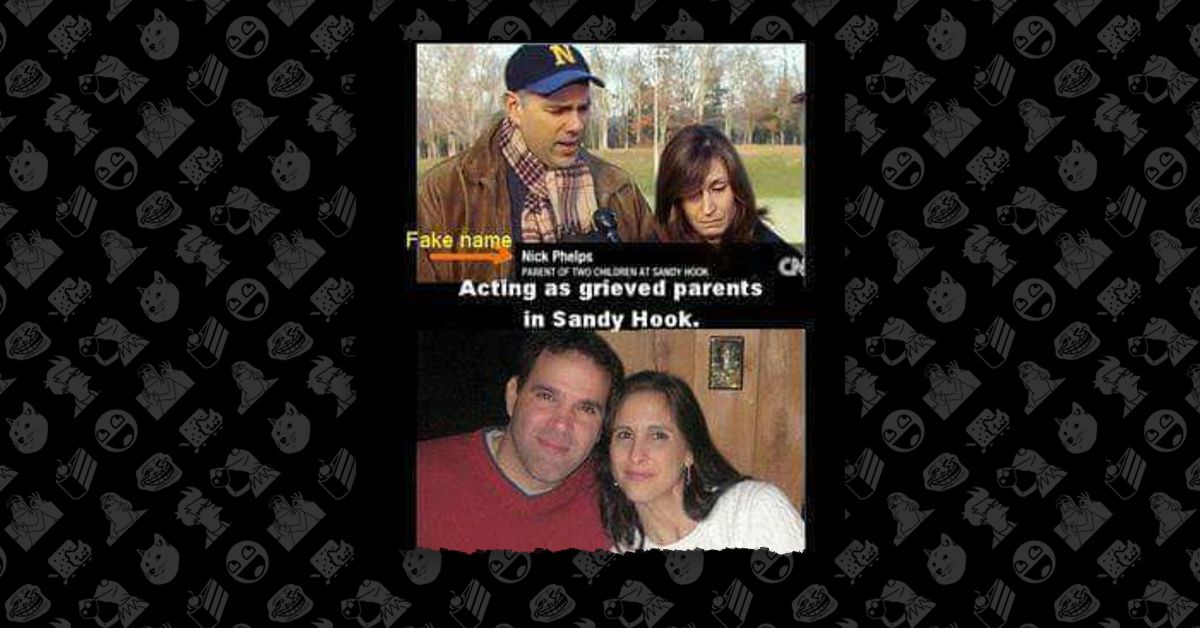 Claim:
Laura Phelps is a crisis actor who lost children during school shootings at Sandy Hook Elementary in 2012 and Marjory Stoneman Douglas High School in 2018.
Rating:

In the aftermath of the December 2012 Sandy Hook Elementary shooting that left dozens of people dead, some local parents had their names dragged through a cesspool of conspiracy theories and they were falsely accused of being "crisis actors." That includes Nick and Laura Phelps, who are the parents of two children who attended the school in Newtown, Connecticut and survived the shooting.

A new wrinkle was added to these rumors after another school shooting in February 2018. The devastation at Marjory Stoneman Douglas High School, which left 17 dead, somehow inspired conspiracy theorists to claim that the Phelps had returned to the headlines as "crisis actors," this time with a daughter who attended Marjory Stoneman Douglas High School in Parkland, Florida.

This is the same twatwaffle who was yelling at president Trump to do something about guns in schools yesterday.

My god the powers that be are becoming so fucking lazy these days. Hire more people FFS and stop reusing the same old played crisis actors.

Wake the fuck up people! This Facebook post is riddled with errors, misinformation, and unfounded claims. For one, we found no record of Phelps "yelling at president Trump to do something about guns in schools" in the aftermath of the Parkland, Florida shooting.

This post also claimed that Phelps' lost children in the school shootings at both Sandy Hook and Marjory Stoneman Douglas. That is not true. The parents have publicly described their fears after their children survived the Sandy Hook shooting:

Laura Phelps, another parent who has two children at the school aged six and nine, described the experience this way yesterday: "It was like reaching into your insides and pulling them out." Both survived, but the younger one lost friends.

It should also be noted that a list naming the 17 people who were killed at Marjory Stoneman Douglas does not include anybody named Phelps or Sexton, the alias conspiracy theorists accuse the couple of using.

Wean wasn't the only person who tried to connect the Phelps family to the Parkland, Florida shooting. Several other Facebook posts, as well as a Reddit thread on r/The_Donald, claimed that these "crisis actors" were posing as the Sexton family in Florida:

Both of these images are years old and neither are related to the shooting in Parkland, Florida.

The top image was taken from a CNN interview with the Phelps family in December 2012 after the school shooting at Sandy Hook (not Parkland).

The lower image of the Sexton family can also be dated back until at least 2012 when it was shared by disreputable web sites claiming that the Sandy Hook shooting was a hoax. As we noted at the time, these images simply show two different groups of people:

The notion that Homeland Security is employing “crisis actors” to portray grieving parents and others connected with the Sandy Hook shootings (such as Laura and Nick Phelps) is based on nothing more than some superficial physical similarities between persons connected to the Sandy Hooks shootings and completely unrelated persons.

In fact, the false claims here make no efforts to offer any sort of verifiable proof. The photos do not depict the so-called crisis actors in the actual act of pretending to be anything. They do not offer support or proof of, say, an interview with a news organization or a timely photograph of either family in Florida at the site of the shooting. The sole string that seems to attempt to connect the Phelps to the Sextons is a passing resemblance to one another. The claims are utterly baseless.

It isn't the first time fake news peddlers have confused people who happen to be brunettes. Laura Phelps was also accused of being the Sandy Hook shooter's lawyer. Although both women had brown hair, they were not the same person.

Conspiracy theorists have been attempting to prove that Nick and Laura Phelps are "crisis actors" since more than two dozen people were gunned down at an elementary school in December 2012. These despicable claims were not true at the time and are not true now.