Is California's Governor Requiring Students Use Arabic Numbers in Schools?

A "satirical" blog posted a story seizing on readers getting angry about a nonexistent California law. 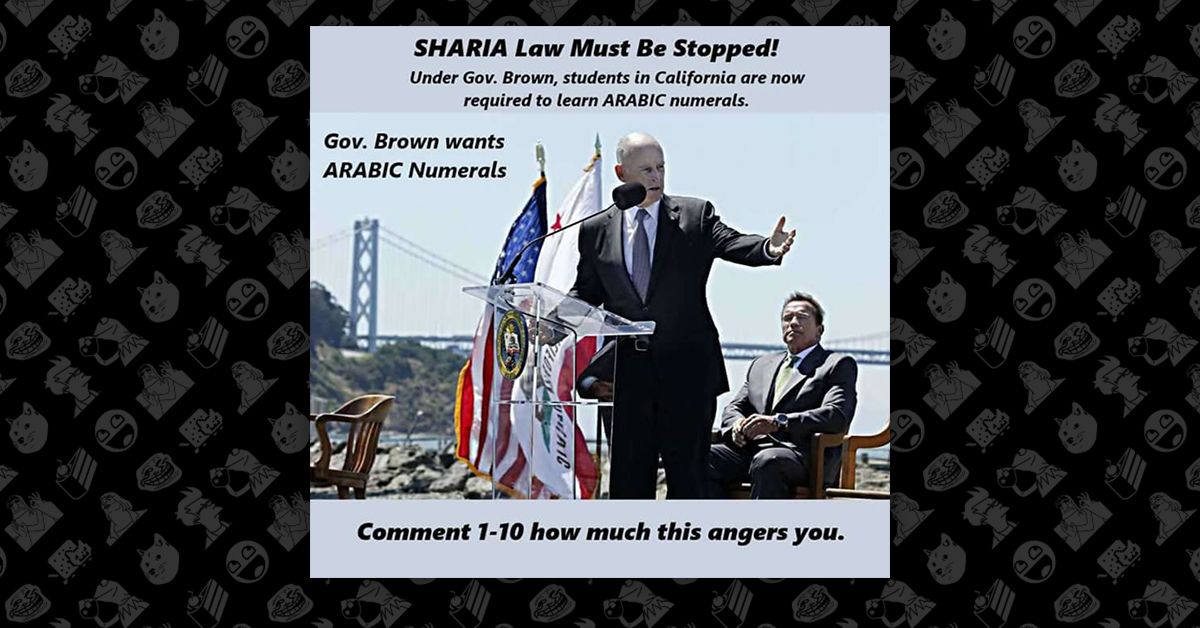 On 13 March 2018, satire blog The Last Line of Defense garnered more than 11,000 shares for a picture posted on its Facebook page lampooning unsuspecting readers' fear of anything that might make them think of the "threat" of Sharia law. The image showed California Gov. Jerry Brown alongside the caption: The governor is not suddenly "requiring" the teaching of Arabic numerals; the fact is that the Hindu-Arabic numeral system, as it is also called, is already used worldwide. The picture was published shortly after the blog posted a story about Brown signing a "Public School Cultural Reform" bill:

The law will require that all students, beginning in kindergarten, be taught Arabic numerals.

It also requires that students in 4th grade learn about Islam and Sharia Law, saving Christianity for the 7th Grade.

Like all of the blog's content, the story is a fabrication; the site contains a disclaimer featuring a definition for "satire" and the statement:

If you disagree with the definition of satire or have decided it is synonymous with “comedy,” you should really just move along.

In October 2017 another "satirical" site affiliated with the blog, FreedomJunkshun.com, posted a story referring to U.S. Army Sgt. La David Johnson — who was killed during an attack on his platoon in Niger — as a deserter. The story was later pulled.