Is This an Armed Teacher Protecting Students at an Israeli School?

An image purportedly showing an teacher with a gun slung across her back while watching over students is often shared with misleading claims about security protocols within the country. 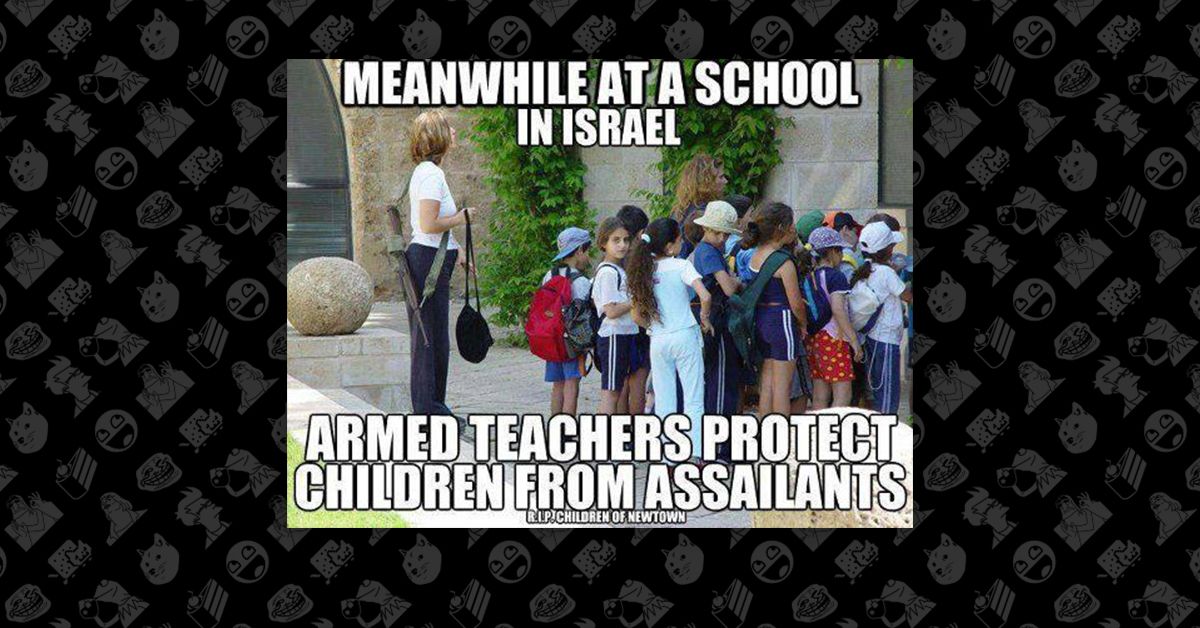 Claim:
A photograph shows a teacher carrying guns at a school in Israel.
Rating:

A photograph purportedly showing an armed teacher at a school in Israel tends to get passed around the Internet every time there is a school shooting in the United States.

Second amendment advocates have been using this image since at least 2012 (when twenty children were killed at Sandy Hook Elementary School in Newtown, Connecticut) to argue that arming teachers would prevent future fatalities.

And, unfortunately, it was posted again in February 2018, in the wake of a deadly school shooting in Florida: This image is real in the sense that it has not been digitally altered (other than the text) and it appears that it was truly taken in Israel. However, this image was not taken at a school, and Israel's school security practices make it unlikely that the armed woman in the photograph is a teacher.

The earliest version of this image that we could find came from a 23 June 2011 post on Teejaw.com about a mass shooting at a summer camp in Norway that left nearly 80 people dead. The author of that post argued that the death toll would have been lower if one of the adults had been armed and used the viral photograph (which they claimed was taken in the Old City of Acre, Israel in 2002) to show how other countries protect their children:

If some of the adults on the island had been armed would the death toll have been lower? I think so. The shooter in Tucson who recently killed 5 and wounded a U.S. Congresswoman was stopped by a CCW holder (without using his firearm, but he was armed).

It may be that the United States and Israel are the only civilized countries where a majority of people understand the simple concept that a deranged man with a gun can only be stopped by other people with guns (unless a brave group takes him down by charging him at great risk to themselves, which also happened in Tucson). This photo I took in the City of Acre, Israel in 2002 of a couple of school teachers on a class outing with their students reveals that understanding. One can tell by simply looking at the photograph that it does not show a traditional classroom; the poster noted that this image was taken during a school outing. In other words, this photograph cannot be used to support the claim that teachers in Israel carry weapons in school.

The original post did say that the armed woman in the photograph was a teacher, but we are skeptical about this label, as despite what this meme says, it is not commonplace for teachers in Israel to carry weapons. A 2013 article in Campus Safety also noted that schools would likely hire soldiers from the Israel Defense Forces, police officers, or security guards to escort field trips:

As we traveled the streets of Tel-Aviv, my mind turned to stories I’d heard of how there are soldiers securing every school and school bus in Israel. I quickly learned after observing a school from the street and making inquiries of our police escort that this was not the case. It is correct that they do indeed have armed security in every school and that an officer is very visible. All the security officers working in the schools are under the guidance of the Israel police, and the standards are high. Unannounced drills are frequent to test operational readiness.

Regarding school buses, there is no such thing in Israel. Any child not walking or being taken to school rides on public transportation. Now, very often there is an armed IDF soldier on the bus, yet this is happenstance and not by design. When there is a heavily attended school field trip, contracted IDF soldiers, police or armed security officers provide the escort for the group.

When this photograph first went viral in 2012, Israeli Today took issue with the claim that all teachers in Israel carry guns. In fact, the Israeli web site wrote that it would be very uncommon for a teacher to be carrying a gun in the country, and surmised that the woman in the photograph was actually a security guard:

There is a picture going around the Internet that I have seen about a dozen times today that claims that Israeli teachers are packing heat. Well, are they? The answer is “NO.” There may be some exceptions in dangerous areas like the West Bank (where five percent of Israelis live), but in general, Israeli teachers are not walking around like it’s the Wild Wild West, strapped with a six shooter. No, our teachers are not focused on shooting, but educating. That doesn’t mean, however, that we don’t protect young students.

In the picture, the students are on an outing. While it appears that the teacher is holding a rifle, I have never seen such a thing in ten years of living here. Rest assured however, they are under armed protection. In most cases it is an armed guard or a soldier that will accompany a class, not the teacher. And my guess is that the woman with the gun is a security guard, not a teacher.

Israel’s successful gun ownership laws both serve to make sure upstanding, brave and mentally sound citizens have access to guns, and that those who present even a minor threat are prevented from possessing one. It would be a mistake to use Israel as the poster child for more weapons in the US, as our success here is much more connected to limiting weapons and enabling strategies such as gates, fences and armed guards (not armed teachers), to protect our children. Sorry to disappoint, but the truth is important.

This image does show a woman with a gun at her hip watching over or looking over a group of children. However, this photograph was not taken in a classroom, and the pictured woman is most likely a security guard, not a teacher.