The funnel will be held tomato. Rest in peas. 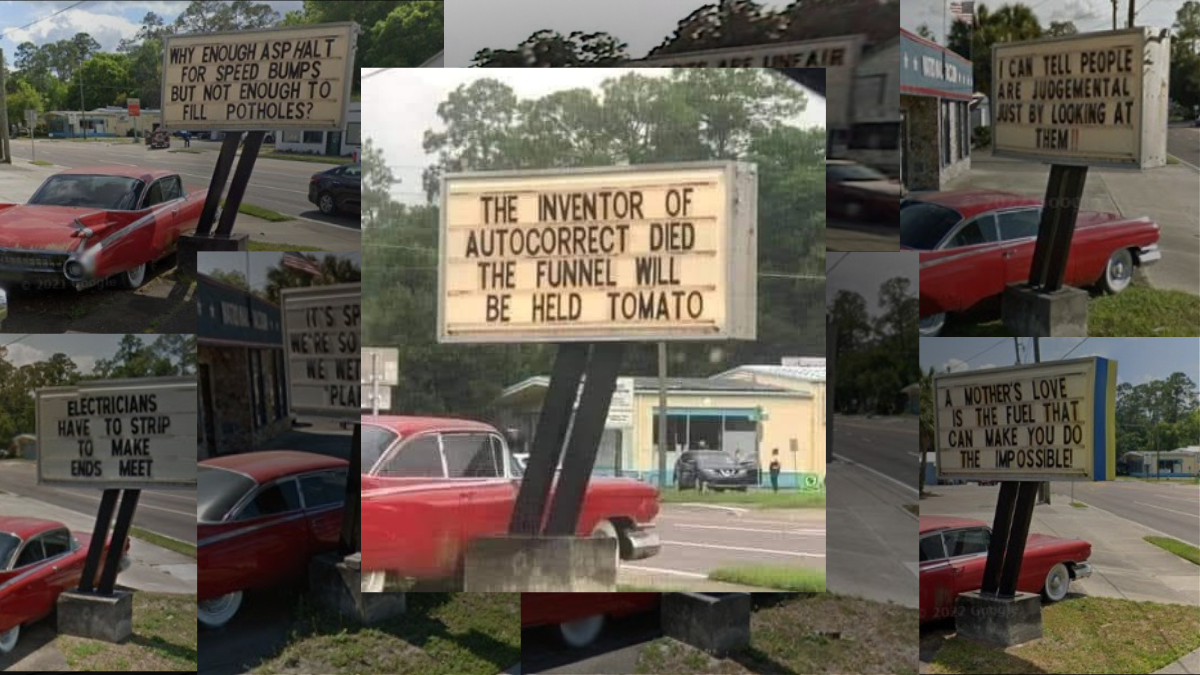 Claim:
A viral photograph shows an actual sign with a humorous display reading: "The inventor of autocorrect has died. The funnel will be held tomato."
Rating:

In July 2022, a user of Snopes' Facebook tip group asked us if a viral photograph of a sign reading "The inventor of autocorrect has died the funnel will be held tomato" was real or if it had been digitally edited. The skepticism surrounding this sign is certainly understandable. After all, we've covered dozens of other photos featuring digitally altered verbiage on signs.

This picture shows a sign in the parking lot of a National Vacuum store in Gainesville, Florida. Here's a screenshot from Google Streeview that shows the sign at a similar angle. This store regularly uses its sign to display humorous messages. Using Google Street View, we were able to find several other sign displays outside this store stretching back to 2007. While we didn't find an image of the "founder of autocorrect" sign, we did find a number of similar idioms, such as "It's Spring! We're so excited we wet our plants," "talk is cheap until you hire a lawyer," and "I can tell people are judgmental just by looking at them." We reached out to National Vacuum for comment and they confirmed that the message "the inventor of autocorrect has died. The funnel will be held tomato" had previously been displayed on their sign. A spokesperson said: "Yes, we have used this sign message in the past."

Who invented autocorrect? Did they die? Will the funnel be held tomato?

The history of autocorrect can be traced back to the early 1990s, when Microsoft implemented a new feature in their word processing program, Word 6.0. There have been numerous improvements and iterations of this idea since then, so there isn't really a single "inventor" of the feature. According to Wired, the "closest thing [autocorrect] has to an individual creator" would be Dean Hachamovitch, who worked on the feature for Microsoft in 1993.

When Hachamovitch first joined Microsoft, he was given a job on the Word team. This was back in the early '90s. Word processing was at a crossroads, split into factions. On one side were the people who wanted adornments and frills—improved desktop publishing, color separation, and the like. On the other side was the functionality gang, with whom Hachamovitch threw in his lot. This camp simply wanted to help people get out of their own way. As Hachamovitch saw it, the main thing that people do on a word processor is type—and typing, in his estimation, is a matter of “a little bit of creativity and a whole lot of scutwork.” He could improve the typing experience by delivering us from scut. His aim was to make our typing sleek and invisible, smooth as speaking from a teleprompter.

Ken Kocienda also deserves partial credit for inventing autocorrect, as he developed the feature for the original iPhone.

As of this writing, Hachamovitch and Kocienda are both still with us.