A photograph purportedly shows a miniature insect spy drone that can take photographs and DNA samples. 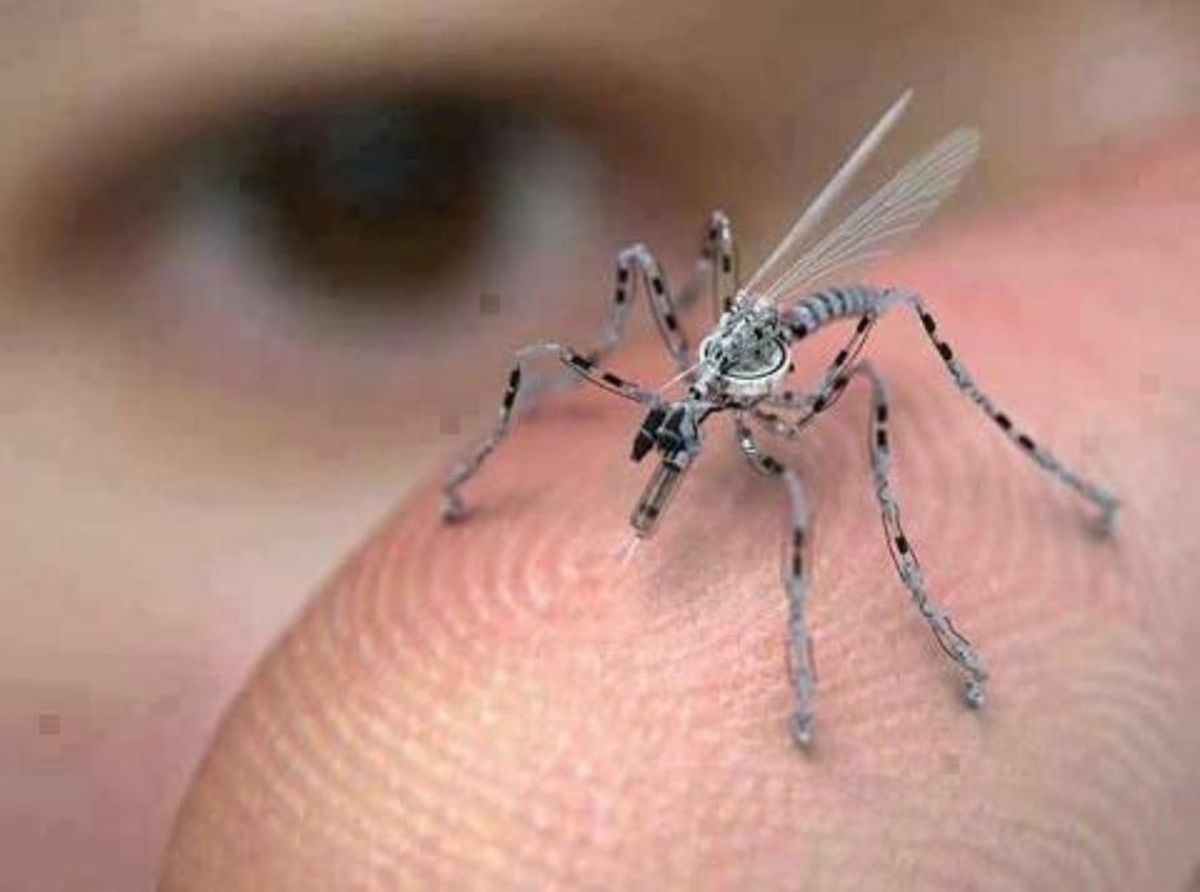 Claim:
A photograph shows an insect spy drone that can take photographs and DNA samples.
Rating:

Is this a mosquito?

No. It's an insect spy drone for urban areas, already in production, funded by the US Government. It can be remotely controlled and is equipped with a camera and a microphone. It can land on you, and it may have the potential to take a DNA sample or leave RFID tracking nanotechnology on your skin. It can fly through an open window, or it can attach to your clothing until you take it in your home. One of the current areas of research reportedly being undertaken in the scientific/military field is the development of micro air vehicles (MAVs), tiny flying objects intended to go places that cannot be (safely) reached by humans or other types of equipment. One of the primary military applications envisioned for MAVs is the gathering of intelligence (through the surreptitious use of cameras, microphones, or other types of sensors); among the more extreme applications posited for such devices is that they may eventually be used as "swarm weapons" which could be launched en masse against enemy forces.

Some efforts in MAV research have involved trying to mimic birds or flying insects to achieve flight capabilities not attainable through other means of aerial propulsion. In 2007 a bug-like MAV model with a 3-cm wingspan was displayed at a robotics conference, in 2008 the U.S. Air Force released a simulated video showing MAVs about the size of bumblebees, and in 2012 engineers at Johns Hopkins University were studying the flight of butterflies to "help small airborne robots mimic these maneuvers."

The specific mosquito-like object pictured above is, however, just a conceptual mock-up of a design for a MAV, not a photograph of an actual working device "already in production." And although taking DNA samples or inserting micro-RFID tracking devices under the skin of people are MAV applications that may some day be possible, such possibilities currently appear to be speculative fiction rather than reality.

Some have claimed the U.S. government has not only researched and developed insect-like MAVs, but for several years has been furtively employing them for domestic surveillance purposes:

The US government has been accused of secretly developing robotic insect spies amid reports of bizarre flying objects hovering in the air above anti-war protests.

No government agency has admitted to developing insect-size spy drones but various official and private organisations have admitted that they are trying.

But official protestations of innocence have failed to kill speculation of government involvement after a handful of sightings of the objects at political events in New York and Washington.

Vanessa Alarcon, a university student who was working at an anti-war rally in the American capital [in September 2007], told the Washington Post: "I heard someone say, 'Oh my God, look at those.'

"I look up and I'm like, 'What the hell is that?'. They looked like dragonflies or little helicopters. But I mean, those are not insects."

Bernard Crane, a lawyer who was at the same event, said he had "never seen anything like it in my life". He added: "They were large for dragonflies. I thought, 'Is that mechanical or is that alive?'"

The incident has similarities with an alleged sighting at the 2004 Republican National Convention in New York when one peace march participant described on the internet seeing "a jet-black dragonfly hovering about 10 feet off the ground, precisely in the middle of 7th Avenue".

Entomologists suggest that the objects are indeed dragonflies. Jerry Louton, an expert at the National Museum of Natural History, said Washington was home to large, impressively-decorated dragonflies that "can knock your socks off".

Others maintain the technical obstacles involved in creating flying insect-sized robots have yet to be overcome:

The technical challenges of creating robotic insects are daunting, and most experts doubt that fully working models exist yet. "If you find something, let me know," said Gary Anderson of the Defense Department's Rapid Reaction Technology Office.

Getting from bird size to insect size is not a simple matter of making everything smaller.

"You can't make a conventional robot of metal and ball bearings and just shrink the design down," said Ronald Fearing, a roboticist at the University of California at Berkeley. For one thing, the rules of aerodynamics change at very tiny scales and require wings that flap in precise ways — a huge engineering challenge. Scientists have only recently come to understand how insects fly.

Even if the technical hurdles are overcome, insect-size fliers will always be risky investments. "They can get eaten by a bird, they can get caught in a spider web," Professor Fearing said.