Were Inmates Abandoned at Orleans Parish Prison During Hurricane Katrina?

Inmates at Orleans Parish Prison reported that they spent several days in flooded cells without food or water while awaiting rescue after Hurricane Katrina. 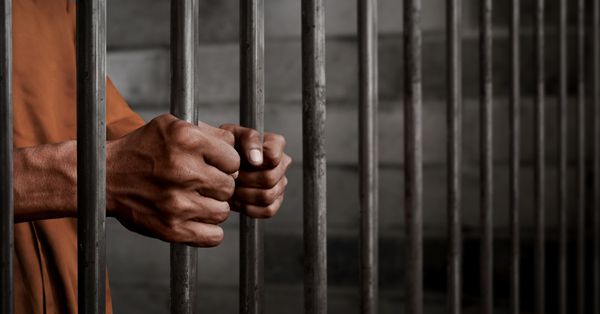 After Hurricane Katrina, many inmates at OPP in New Orleans reported being stuck in cells flooded with chest-high water, and being left without food or water for days at a time while correctional officers were absent. Some 517 inmates were unaccounted for immediately afterwards.

Whether several hundred inmates escaped, died, or "disappeared" during Hurricane Katrina, rather than remaining in custody but not being properly accounted for afterwards, is unknown.

Mandatory evacuations were ordered for more than a million people living in the coastal communities of South Carolina, North Carolina, and Virginia in September 2018, as Hurricane Florence threatened the eastern coast of the United States. While most residents had the ability to hop on an interstate and flee to safety, others, such as prison inmates, enjoyed no such freedom of movement.

A spokesperson for the South Carolina Department of Corrections told Vice News that while they were "monitoring the situation", they currently no plans to evacuate inmates as the hurricane approached, stating that "it’s (previously) been safer to stay in place with the inmates rather than move to another location." Although this description may be accurate, many readers couldn't help but draw parallels to the example of Hurricane Katrina, during which Louisiana inmates suffered through horrendous conditions after a similar decision was undertaken: The claims made in this viral tweet - that more than 1,000 inmates at at Orleans Parish Prison (OPP) were left to die, that correctional officers abandoned their posts, that prisoners were stuck without food or potable water in flooded cells, and that 517 inmates went missing -- are largely derived from two reports filed by Human Rights Watch and the American Civil Liberties Union. While some of the details of this time period have been lost to history (no official reports on inmate deaths during Katrina were compiled), news outlets, human rights organizations, and first-hand accounts from people who were imprisoned at OPP at the time of the storm have helped piece together the story.

As Hurricane Katrina approached the Gulf Coast in late August 2005, officials in Louisiana were faced with a quandary about what to do with the state's inmates. New Orleans mayor Ray Nagin had ordered the city's first "mandatory evacuation," but Sheriff Marlin Gusman opted not to move inmates out of OPP. During a press conference before the storm hit, Gusman said that "we're going to keep our prisoners where they belong." In fact, OPP even took in some inmates from surrounding jail facilities.

At the time of the storm, OPP was housing about 6,500 inmates. The prison lost power shortly after the storm made landfall on 29 August 2005, and as the first-floor cells of OPP started to flood, Sheriff Gusman called for help evacuating the prison. Completing the evacuation took several days, however, and many prisoners reported that during that period they felt as if they had been abandoned by guards and "left to die."

Human Rights Watch provided this summary of the evacuation of Orleans Parish Prison:

The sheriff of Orleans Parish, Marlin N. Gusman, did not call for help in evacuating the prison until midnight on Monday, August 29, a state Department of Corrections and Public Safety spokeswoman told Human Rights Watch. Other parish prisons, she said, had called for help on the previous Saturday and Sunday. The evacuation of Orleans Parish Prison was not completed until Friday, September 2.

According to officers who worked at two of the jail buildings, Templeman 1 and 2, they began to evacuate prisoners from those buildings on Tuesday, August 30, when the floodwaters reached chest level inside. These prisoners were taken by boat to the Broad Street overpass bridge, and ultimately transported to correctional facilities outside New Orleans.

But at Templeman III, which housed about 600 inmates, there was no prison staff to help the prisoners. Inmates interviewed by Human Rights Watch varied about when they last remember seeing guards at the facility, but they all insisted that there were no correctional officers in the facility on Monday, August 29. A spokeswoman for the Orleans parish sheriff’s department told Human Rights Watch she did not know whether the officers at Templeman III had left the building before the evacuation.

According to inmates interviewed by Human Rights Watch, they had no food or water from the inmates' last meal over the weekend of August 27-28 until they were evacuated on Thursday, September 1. By Monday, August 29, the generators had died, leaving them without lights and sealed in without air circulation. The toilets backed up, creating an unbearable stench.

“They left us to die there,” Dan Bright, an Orleans Parish Prison inmate told Human Rights Watch at Rapides Parish Prison, where he was sent after the evacuation.

The ACLU published more than a hundred first-hand testimonials from inmates about their time at OPP during and after the storm. A number of them reported that they were locked in cells as the water rose to their chests, and that they were largely abandoned by the guards and left without food or water:

Inmate #1 states she was housed in Templeman IV during Hurricane Katrina. She says she had been incarcerated in OPP for four months prior to Hurricane Katrina. When the hurricane hit, Inmate #1 says her dorm quickly filled with chest high water. She states she was next moved to a smoke-filled dorm where she was housed with male prisoners. She says that the deputies locked her and the other prisoners inside the dorm. “While I was a [sic] Templeman the deputy les [sic] did lock all the doors I feared for my life. I thought I was going to die.” She says she was not fed or given water for three days. Inmate #1 says she was next moved into a room filled with water and made to stay there for 24 hours prior to being moved onto the Interstate 10 overpass. On the overpass, she states she was ordered not to move on threat of being shot by the guards. While on the overpass, she states that fellow prisoners were losing consciousness from hunger and dehydration; she herself was pepper-sprayed.

Inmate #5 was incarcerated in OPP (Templeman III F and C Side) for 2 weeks prior to Hurricane Katrina. OPP guards left Inmate #5 locked in his cell in rapidly rising water for 3 days. “[T]he flood water got up to 6 feet up to my neck, and I’m 6'1", I really thought I was going to die ...” Inmate #5 says the power went out and inmates had “fires burning inside the building ...” Eventually the smoke became overpowering and the inmates “had to break all the windows to get air ...” The lack of power left Templeman III dark to the point “you could not see in front of you ...” As the days went on, the inmates took desperate measures to get help. “[W]e were just scared to die in the High Water we were hangeing [sic] out of windows with sings [sic] saying help us But know [sic] one came!” Eventually guards did come and take Inmate #5 to the Interstate 10 overpass. “

Inmate #21 was incarcerated in OPP (Templeman I) for four days prior to Hurricane Katrina. He was locked in a cell with other inmates where water rose to chest level. Deputies were not at their posts and he had no way to communicate with anyone besides other trapped inmates. After he was eventually released from this cell, he and others were evacuated to a higher floor of the building and locked and abandoned for two days. “

The OPP inmates were eventually evacuated to other prisons around the state. It's unclear, however, if all of the inmates housed at OPP before the storm made it out of the prison. Human Rights Watch compared a list of inmates at OPP from just before the storm to a list of the evacuated inmates compiled by the state Department of Corrections and Public Safety and found that 517 inmates were unaccounted for.

It's not exactly clear what happened to these 517 individuals. Contemporaneous news articles reported that New Orleans correctional facilities simply weren't prepared for this type of disaster and that the system they had in place to keep track of inmates had largely failed:

When the Orleans Parish Prison was evacuated during Hurricane Katrina, the inmates wore colored armbands that indicated the nature of their offenses. But by the time they arrived at temporary holding facilities scattered throughout the state, some were missing their armbands. It didn't matter. The state corrections officers receiving the prisoners had no idea what the color codes meant. The armbands are one example of how Hurricane Katrina and the mass evacuations of 8,500 inmates from prisons in three Louisiana parishes threw the state's corrections and court systems into chaos from which they're only beginning to recover.

While some of the missing individuals may be explained away by accounting mistakes, several OPP inmates said they witnessed dead bodies floating in the flooded prison waters and reported that some prisoners had escaped during the storm:

Eventually Inmate #20 was evacuated to the Interstate 10 overpass. There she witnessed the result of one escape attempt. “A male tried to run/escape and was shot in the back.” Inmate #20 was also maced and denied medical treatment.

He says that the deputies shot at inmates for attempting to escape, or as Inmate #31 characterized it, “trying to live.” Inmate #31 reports he saw the arm of a man that he knew to be dead.

Inmate #7 was incarcerated in OPP (Templeman II E-2) for four months prior to Hurricane Katrina. He reports that he received, “no Food are [sic] water are [sic] air ... They left us to Die.” He was left in a locked cell and says that guards assaulted and maced him and other inmates. He states that inmates did attempt to escape, “or they would have Died.” Escaping inmates were shot at; inmates not attempting to escape were shot with bean bags. He says that he saw dead people in the water.

Sheriff Gusman later claimed that these reports were exaggerated:

The Sheriff denied the truth of their claims, stating: “They’re in jail, man. They lie.” Sheriff Gusman later told one reporter: "I have 75 accounts from inmates given by lawyers with misleading questions. It’s kind of hilarious to read them ... None of it was true. But when you put it in the paper it becomes more credible and it frustrates the hell out of me. Don’t rely on crackheads, cowards and criminals to say what the story is.”

While the specifics of what occurred at Orleans Parish Prison during Hurricane Katrina in 2005 may never be publicly known, the general gist of this viral message is accurate: Thousands of inmates suffered through horrendous conditions as they awaited rescue after officials decided not to evacuate the prison before a hurricane.