Was Indiana Egg Farmer Taken to Hospital With Live Chicken in Rectum?

Some satire sites appear to be obsessed with rectums. 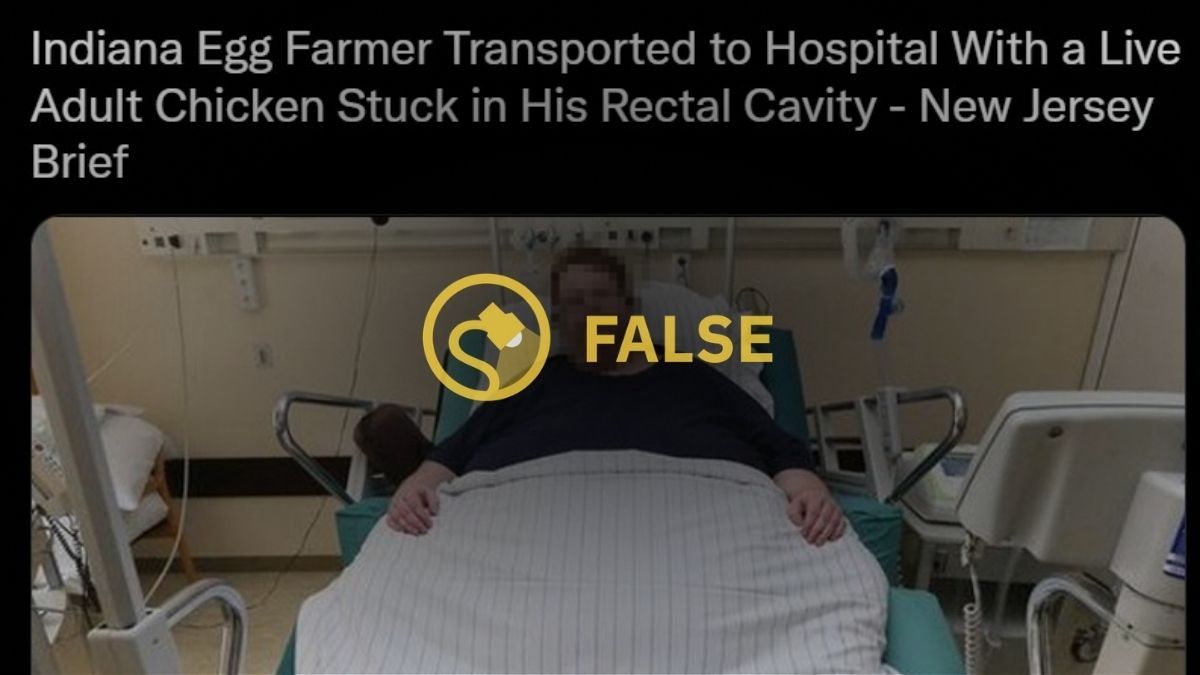 Claim:
An Indiana egg farmer was transported to the hospital with a live, adult chicken stuck in his rectal cavity.
Rating:

In March 2022, a story about an Indiana egg farmer being taken to the hospital with a live chicken stuck in his rectum was widely circulated on social media: This is not a genuine news story but a piece of "satire" originally published in August 2020 on the World News Daily Report (WNDR), an entertainment website known for publishing crude, shocking, and entirely fictional stories.

A farm owner from Shelbyville in Indiana was transported to the hospital in a critical condition late last night with an extremely agitated hen more than half-buried in his rectum.

Around 11:30 last night, Shelby County paramedics were called to answer a medical emergency concerning a serious accident involving a farm animal, something rather frequent in this rural area.

WNDR carries a disclaimer labeling its content as satire.

The disclaimer reads: "World News Daily Report assumes all responsibility for the satirical nature of its articles and for the fictional nature of their content. All characters appearing in the articles in this website – even those based on real people – are entirely fictional and any resemblance between them and any person, living, dead or undead, is purely a miracle."

In March 2022, WNDR's fictional article was republished on the website NewJerseyBrief.com where it was presented as a genuine news item.

In addition to the story originating on a satire site, a reverse image search on the story's lead image revealed a few interesting tidbits. First, the World News Daily Report has used this image to illustrate several fictional stories. The site previously claimed that this man sued a hospital after it errantly performed a C-section on him. The Daily News Reported, a similarly named satire site, also used this photograph to illustrate a fictional story about a man who had spiders hatch from his belly button.

In reality, this photograph shows a man in a hospital in Riegelsberg, Germany, after he suffered a heart attack. Michael Lehberger reportedly weighed 63-stone (880 pounds) when he was taken to the hospital in 2013. In 2017, the Mirror reported that Lehberger had lost more than 40 stone (560 pounds).

We've have covered several World News Daily Report stories over the years. This site appears to have a penchant for stories relating to things getting stuck in unsuspecting orifices, such as this fictional story about a scuba diver getting his penis stuck in a giant clam, this jape about a woman getting her phone stuck in her vagina, or this piece of "satire" about a priest getting a cross stuck in his rectum.