Did Andy Rooney Write 'In Praise of Older Women'? 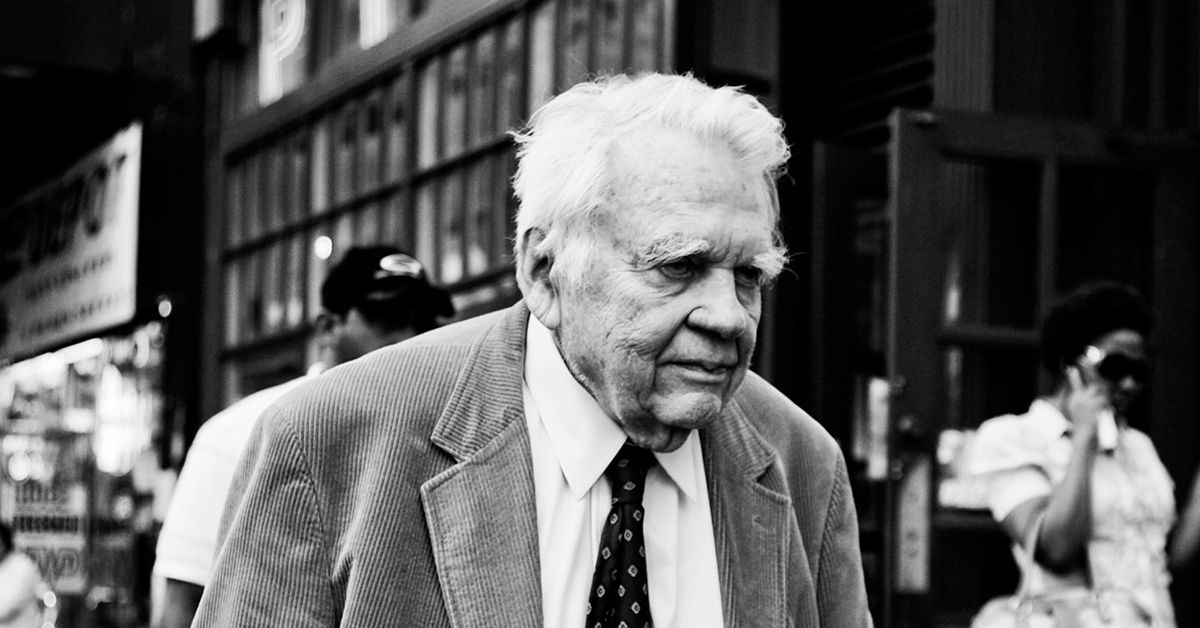 Andy Rooney, the curmudgeonly commentator who for many years closed every Sunday broadcast of television's 60 Minutes news magazine with a (typically sardonic) essay about some aspect of everyday life, was — thanks to the Internet — as well known for what he hasn't said as he is for what he really had said:

In Praise of Older WomenLadies,

As I grow in age, I value women who are over 40 most of all. Here are just a few reasons why:

A woman over 40 will never wake you in the middle of the night to ask, "What are you thinking?" She doesn't care what you think.

If a woman over 40 doesn't want to watch the game, she doesn't sit around whining about it. She does something she wants to do. And it's usually something more interesting.

A woman over 40 knows herself well enough to be assured in who she is, what she is, what she wants and from whom. Few women past the age of 40 give a damn what you might think about her or what she's doing.

Women over 40 are dignified. They seldom have a screaming match with you at the opera or in the middle of an expensive restaurant. Of course, if you deserve it, they won't hesitate to shoot you if they think they can get away with it...

Older women are generous with praise, often undeserved. They know what it's like to be unappreciated.

Women get psychic as they age. You never have to confess your sins to a woman over 40. They always know.

A woman over 40 looks good wearing bright red lipstick. This is not true of younger women or drag queens.

Once you get past a wrinkle or two, a woman over 40 is far sexier than her younger counterpart.

Older women are forthright and honest. They'll tell you right off you are a jerk if you are acting like one. You don't ever have to wonder where you stand with her....

Yes, we praise women over 40 for a multitude of reasons. Unfortunately, it's not always reciprocal. For every stunning, smart, well-coiffed, hot woman of 40+, there is a bald, paunchy relic in yellow pants making a fool of himself with some 22-year-old waitress.

Ladies, I apologize for all of us.

The piece quoted above, an essay "In Praise of Older Women," is another portion of his "hasn't said" fame.

This item was not penned by Andy Rooney (who passed away at the age of 92 on 4 November 2011); it is an embellished version of a piece created by Frank Kaiser, a columnist whose Suddenly Senior articles are published on his web site and syndicated to a variety of newspapers across the U.S.

"It just bugs me that anybody would put my name on something I didn't write," said Rooney from his New York office. He's been the object of this kind of hoax before, and another, he said, had just crossed his desk.I asked him if he shared the author's affection for older women, and he said, "Not particularly."

In October 2005, in his weekly 60 Minutes commentary, Andy Rooney said this of the piece:

A saccharine collection of comments called ‘ANDY ROONEY ON OLDER WOMEN’ has had wide circulation. I was pleased by how many people wrote to say they didn't believe I wrote it.

The true author, Frank Kaiser, had this to say about the misattribution:

I actually wrote it in 2000 but about a year ago [i.e., in 2002], I started seeing it come back to me in e-mails attributed to Andy Rooney. It didn't bother me too much. That's sort of the nature of the Internet. I wrote him and made a joke about it and he called me. You know, he's just as cantankerous on the phone as he is on the air.

One of the perks of dufferdom is an increased capacity to appreciate people. Friends. Spouses. And, for me, women. All women.When I was 20, I had eyes only for girls my age. Any woman over 30 was ancient, over 40 invisible. Today, at 65, I still appreciate the 20-year-old for her youthful looks, vigor, and (occasional) sweet innocence. But I equally enjoy women of my own age and beyond, and every age in between. I’ve learned that each has its own special wonders, attractions, magic and beauty.

As I grow in age, I value older women most of all. Here are just a few of the reasons senior men sing the praises of older women:

An older woman looks great wearing bright red lipstick even in glaring sunlight. This is not true of younger women or drag queens.

And yes, once you get past a wrinkle or two, an older woman is far sexier than her younger counterpart!

Her fear of pregnancy gone.

Her appreciation of experienced lovemaking is honed and reciprocal.

And she's lived long enough to know how to please a man in ways her daughter could never dream of. (Young men, you have something to look forward to!)

Older women are forthright and honest. They'll tell you right off that you are a jerk if you're acting like one. A young woman will say nothing, caring what you might think of her. An older woman doesn't give a damn.

An older, single woman usually has had her fill of "meaningful relationships" and "commitment." Can't relate? Can't commit? She could care less. The last thing she needs in her life is another dopey, clingy, whiny, dependent lover!

Older women are dignified. They seldom contemplate having a screaming match with you at the opera or in the middle of an expensive restaurant. Of course, if you deserve it, they won't hesitate to shoot you if they think they can get away with it.

Most older women cook well. They care about cleanliness. They're generous with praise, often undeserved.

An older woman has the self-assurance to introduce you to her women friends. A young woman with a man often will ignore even her best friend because she doesn't trust the guy with other women. The older woman couldn’t care less.

Women get psychic as they age. You never have to confess your sins to an older woman. They always just know.

Yes, we geezers praise older women for a multitude of reasons. These are but a few. Unfortunately, it's not reciprocal. For every stunning, smart, well-coifed babe of 70 there's a bald, paunchy relic in yellow pants making a fool of himself with some 22-year-old waitress.

Ladies, I apologize for us. That men are genetically inferior is no secret. Count your blessings that we die off at a far younger age, leaving you the best part of your lives to enjoy and appreciate the exquisite woman you've become. Without the distraction of some demanding old fart clinging and whining his way into your serenity.

Another celebrated encomium to older women was penned by a famous American statesman over 250 years earlier, when Benjamin Franklin wrote the piece known to us as "Old Mistresses' Apologue":

I know of no Medicine fit to diminish the violent natural Inclinations you mention; and if I did, I think I should not communicate it to you. Marriage is the proper Remedy. It is the most natural State of Man, and therefore the State in which you are most likely to find solid Happiness. Your Reasons against entring into it at present, appear to me not well-founded. The circumstantial Advantages you have in View by postponing it, are not only uncertain, but they are small in comparison with that of the Thing itself, the being married and settled. It is the Man and Woman united that make the compleat human Being. Separate, she wants his Force of Body and Strength of Reason; he, her Softness, Sensibility and acute Discernment. Together they are more likely to succeed in the World. A single Man has not nearly the Value he would have in that State of Union. He is an incomplete Animal. He resembles the odd Half of a Pair of Scissars. If you get a prudent healthy Wife, your Industry in your Profession, with her good Economy, will be a Fortune sufficient.

But if you will not take this Counsel, and persist in thinking a Commerce with the Sex inevitable, then I repeat my former Advice, that in all your Amours you should prefer old Women to young ones. You call this a Paradox, and demand my Reasons. They are these:

1. Because as they have more Knowledge of the World and their Minds are better stor'd with Observations, their Conversation is more improving and more lastingly agreable.

2. Because when Women cease to be handsome, they study to be good. To maintain their Influence over Men, they supply the Diminution of Beauty by an Augmentation of Utility. They learn to do a 1000 Services small and great, and are the most tender and useful of all Friends when you are sick. Thus they continue amiable. And hence there is hardly such a thing to be found as an old Woman who is not a good Woman.

3. Because there is no hazard of Children, which irregularly produc'd may be attended with much Inconvenience.

4. Because thro' more Experience, they are more prudent and discreet in conducting an Intrigue to prevent Suspicion. The Commerce with them is therefore safer with regard to your Reputation. And with regard to theirs, if the Affair should happen to be known, considerate People might be rather inclin'd to excuse an old Woman who would kindly take care of a young Man, form his Manners by her good Counsels, and prevent his ruining his Health and Fortune among mercenary Prostitutes.

5. Because in every Animal that walks upright, the Deficiency of the Fluids that fill the Muscles appears first in the highest Part: The Face first grows lank and wrinkled; then the Neck; then the Breast and Arms; the lower Parts continuing to the last as plump as ever: So that covering all above with a Basket, and regarding only what is below the Girdle, it is impossible of two Women to know an old from a young one. And as in the dark all Cats are grey, the Pleasure of corporal Enjoyment with an old Woman is at least equal, and frequently superior, every Knack being by Practice capable of Improvement.

6. Because the Sin is less. The debauching a Virgin may be her Ruin, and make her for Life unhappy.

7. Because the Compunction is less. The having made a young Girl miserable may give you frequent bitter Reflections; none of which can attend the making an old Woman happy.

8thly and Lastly They are so grateful!!

Thus much for my Paradox. But still I advise you to marry directly; being sincerely Your affectionate Friend.