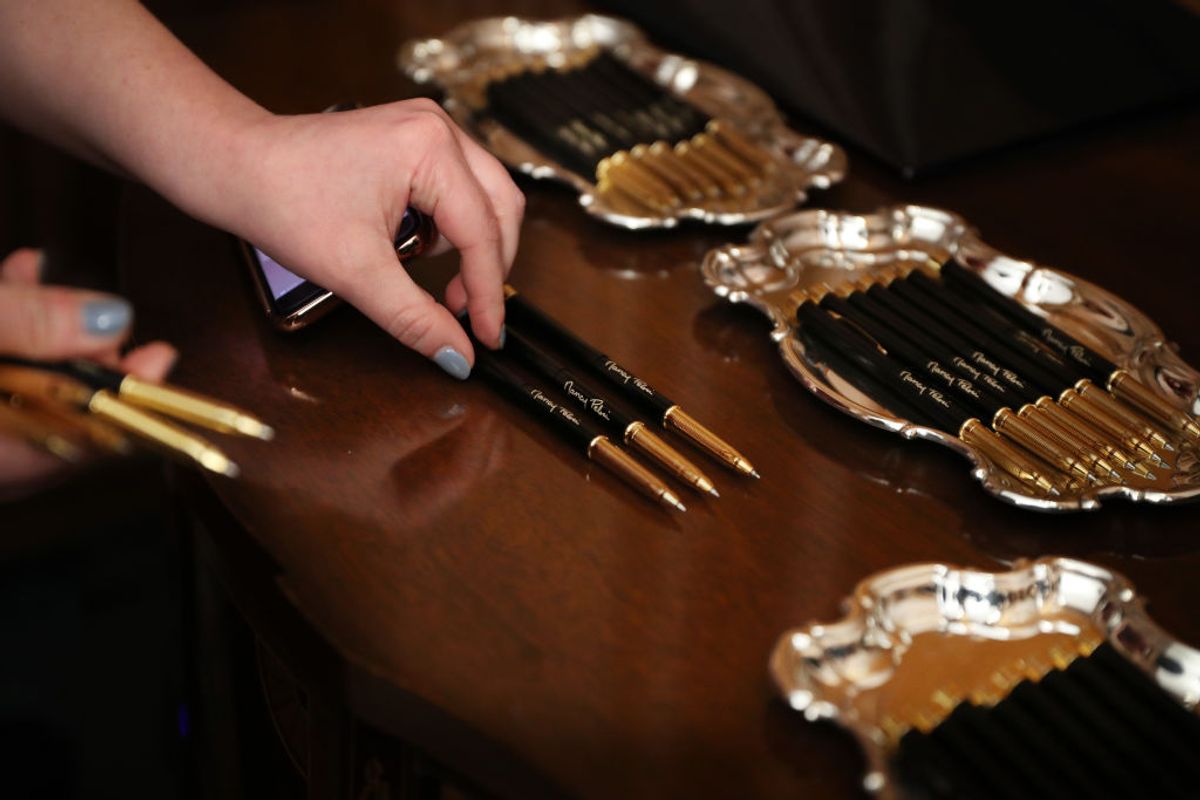 On Jan. 15, 2020, U.S. House Speaker Nancy Pelosi signed the articles of impeachment against President Donald Trump. The signing ceremony was historic — it was only the third time in U.S. history that a president has been impeached. And, according to critics, the event was bit unusual because Pelosi used multiple pens to sign the documents and then handed the writing utensils out as souvenirs.

A rumor soon started to circulate on social media positing that the pens Pelosi had used had cost an obscene amount of money. One Twitter user, for instance, claimed that each pen Pelosi used cost $2,025. A message on Facebook held that Pelosi had used a total of $15,000 worth of pens to sign these documents. This number was exaggerated even further by another Facebook user who claimed that each pen cost $15,000, and that the signing ceremony used a total of $450,000 pens: The most prominent claim, and one that was re-shared verbatim by several different accounts, stated: "Pelosi uses $15,000.00 worth of bullet pens to impeach the president. President Trump uses $1.99 Sharpie to sign $2 billion trade deal with China. That's the difference in a business man and a worthless professional."

While this claim was widespread, it was not supported by evidence. We have encountered no news reports, budget statements, or any other credible information to support the claim that Pelosi used $15,000 worth of pens (or $450,000 worth of pens or $2,025 per pen) to sign the articles of impeachment against Trump. Furthermore, these claims appear to have originated with random social media users who would not have been privy to this sort of information. As these users appear to have been making this information up out of whole cloth, it isn't surprising that the alleged cost of these pens varies from one claim to the next.

Drew Hammill, Pelosi's deputy chief of staff, told us that the pens Pelosi used to sign the articles of impeachment cost just under $15 apiece, and that they were the same type of pen used to sign other pieces of legislation. At $15 a piece, that means the total cost for these pens was about $450, well under the $15,000 (or $450,000) amount claimed in those baseless social media posts.

In 2017, the Trump administration placed an order with long-time pen supplier A.T. Cross for 150 "Century II" pens to be used for signing executive orders. A.T. Cross has been supplying pens to the White House since at least the 1970s. While the cost of these pens vary by model, the Century II pens that Trump used at the start of his administration (this model was also used during President Barack Obama's administration) cost a little over $100 a piece at retail.

However, Trump has since switched from the Century II pen to a Sharpie pen. While Sharpie pens can certainly be purchased in the $2 range, Trump doesn't use a Sharpie that you can purchase at a school-supply store. The Commander-in-Chief reportedly uses a custom Sharpie with his signature inscribed down the side. You can see an image of the pen Trump uses to sign executive orders here.

We reached out to the White House and Newell Brands, the company that manufacturers Sharpies, for more information on Trump's pen. While we can't say exactly how much Trump spends per pen, it seems reasonable to assume that this custom pen is worth more than a $2 generic Sharpie, but well under the $100 pens used at the start of his administration. The "Official Donald J. Trump Fine Point Markers" available via the Trump campaign shop are sold for $15 for a five-pack (which works out to $3 piece).

Is it unusual to use multiple pens to sign important legislation?

In addition to claiming that Pelosi used obscenely expensive pens to sign the articles of impeachment against Trump, many social media users were upset that the House Speaker used multiple writing utensils and then handed them out as souvenirs to mark the occasion.  However, this isn't an unusual practice.

In fact, on the same day Pelosi handed out the impeachment pens to various lawmakers, Trump performed a similar ritual in the Oval Office after signing a trade deal with China. The photograph above is available via Getty Images with the following caption: "WASHINGTON, DC - JANUARY 15: U.S. President Donald Trump, accompanied by U.S. Trade Representative Robert Lighthizer (2nd L) and Treasury Secretary Steve Mnuchin (R), hands out pens to Senators after he and Chinese Vice Premier Liu He, signed phase 1 of a trade deal between U.S. and China, in the East Room at the White House, on January 15, 2020 in Washington, DC. Phase 1 is expected to cut tariffs and promote Chinese purchases of U.S. farm, and manufactured goods while addressing disputes over intellectual property. (Photo by Mark Wilson/Getty Images)"

Time Magazine explained that this tradition — using multiple pens to sign a document and then to give those pens to various people involved — dates back to at least the 1930s when Franklin D. Roosevelt was in office:

The pen used to sign historic legislation itself becomes a historical artifact. The more pens a President uses, the more thank-you gifts he can offer to those who helped create that piece of history. The White House often engraves the pens, which are then given as keepsakes to key proponents or supporters of the newly signed legislation. When Lyndon Johnson signed the Civil Rights Act in 1964, he reportedly used more than 75 pens ... and gave one of the first ones to Martin Luther King Jr. Senators Hubert Humphrey and Everett McKinley Dirksen also received pens for their aid in shuttling the bill through Congress. And in 1996, President Clinton gave the four pens he used to sign the Line-Item Veto bill — which allowed Presidents to veto individual sections of legislation rather than the entire thing — to those most likely to appreciate the bill's impact: Gerald Ford, Jimmy Carter, Ronald Reagan and George H.W. Bush.

The U.S. Senate also provided souvenir pens in 1999 during the impeachment trial of Bill Clinton. According to a contemporary report in the Akron Beacon, senators used silver Parker Vector pens (worth about $10 a piece) to sign the oath book after they were sworn in and were allowed to keep the pens as a memento:

Did Pelosi Use $15,000 Worth of Pens to Sign the Articles of Impeachment?

In summary, no evidence exists to support the claim that Pelosi used $15,000 worth of pens to sign the articles of impeachment. This claim originated with random social media accounts and was not supported with documentation. Furthermore, Pelosi's chief of staff refuted the claim, saying the pens cost just under $15 a piece.

While some may find it objectionable to hand out souvenir pens after signing such a grave document, it isn't unusual. The tradition of using multiple pens to sign important documents, and then giving those pens away to the people involved, can be traced back decades.

Previous Article
Next Article
Article 5 of 5 in Collection

Correction [18 January 2020]: The markers available via the Trump campaign store are sold in packs of 5, not individually as originally stated.