Did People Wear 'Biden Please Let Us In' Shirts at US-Mexico Border?

Migrants reportedly gathered at the border hoping for more lenient immigration policies under the Biden administration. 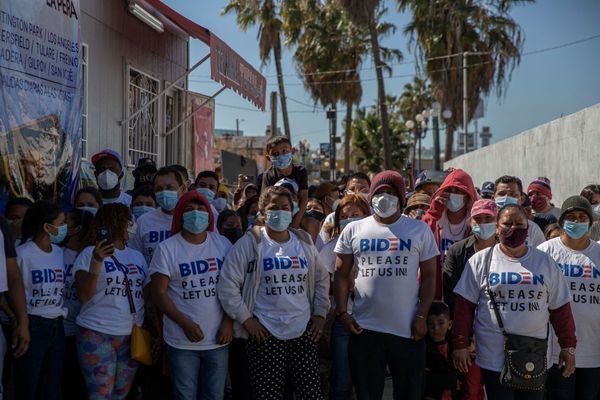 Image Via Photo by Stringer/picture alliance via Getty Images

In March 2021, images started to circulate on social media that supposedly showed a group of people near the Mexico-United States border wearing shirts that read: "Biden Please Let Us In." Reuters reported that a number of migrants have gathered at the border, hoping that U.S. President Joe Biden's administration would allow more people to enter the country than his predecessor former President Donald Trump did. Reuters wrote:

Ever since President Joe Biden won the White House vowing to undo the hardline approach of his predecessor Donald Trump, Mexico has both looked forward to an end to migration burdens imposed by Trump, and braced for a new influx of people.

Detentions on the U.S border have surged since Biden took office on Jan. 20. Mexico has urged Washington to help stem the flow by providing development aid to Central America, from where most migrants come, driven by a humanitarian crisis.

“They see him as the migrant president, and so many feel they’re going to reach the United States,” Mexican President Andres Manuel Lopez Obrador said of Biden the morning after a virtual meeting with his U.S. counterpart on March 1. “We need to work together to regulate the flow, because this business can’t be tackled from one day to the next.”

As images of these "Biden Please Let Us In" shirts circulated on social media, many people asked who was providing the funding for these shirts. As far as we can tell, these shirts were provided by Casa de Luz Tijuana, an organization that provides assistance to people who have migrated. On Feb. 27, the group posted a photograph of these shirts to their Facebook page and wrote that "Biden PLEASE Let us In" was a movement started by Casa de Luz: These are genuine images from the Mexico-United States border, and it appears that the "Biden Please Let Us In" shirts were provided by a local organization in an attempt to pressure the Biden administration to allow more migrants to enter the United States.