Is This an Image of a 'Cow Crusher' Device Designed to Crush Cows?

A photograph of a common piece of farm equipment was shared with false accusations concerning animal torture. 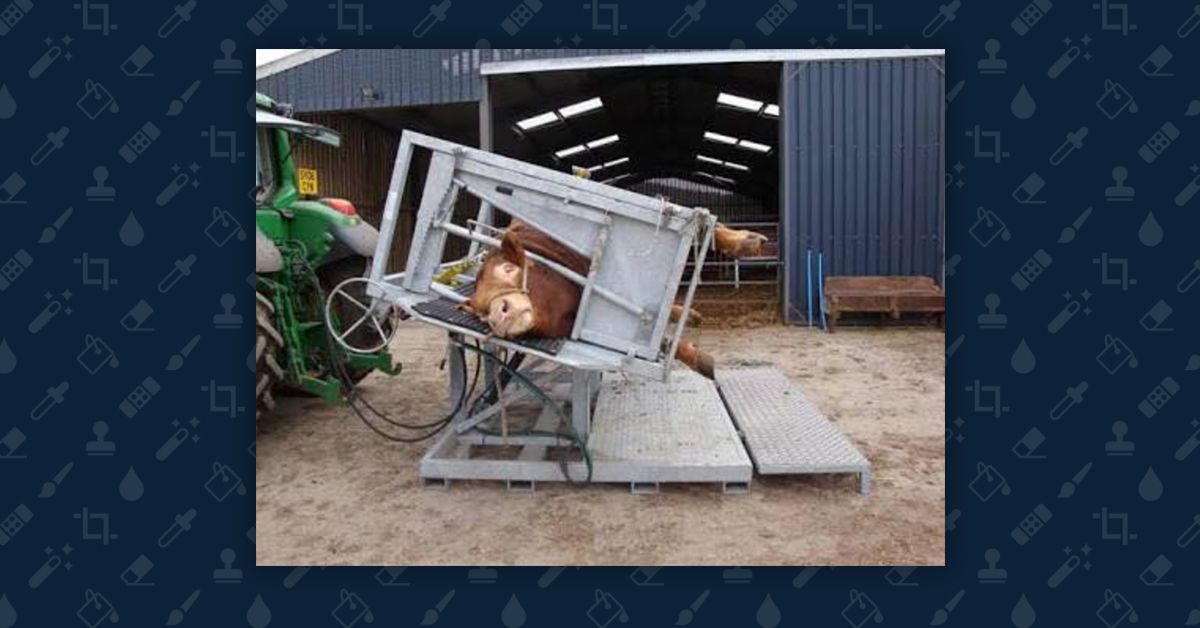 An image showing a cow inside of a strange metal device was shared online in July 2018 along with a caption saying it depicts a "cow crusher" — a device designed to crush cows: Cow crushers designed to crush cows to death is one horrid thing but this is a whole new level or cow torture! This device gives farmers a kick from LITERALLY crushes the poor animal whilst rotating it up, down, side to side in a rapid movement controlled by a big tractor machine, shaking it around in HORROR! This is NOT a theme park!

This poor cow had no hope, the blood would have rushed to her head until she passed out and who knows what the “farmers” did to the poor animal after that. All I know is that she is dead now and is probably covered in urine.

I found this photo on google, which I thought was a G rates site. I WILL find the cowards who did this to poor Stephanie (my children named her that out of respect) and let it be known that my eldest son is in the group ANTIFA, so let that be a warning to anyone else who takes sexual pride in torturing poor animals.

The photograph is real and this device is sometimes referred to as a "livestock crush," "cow crush," or a "cattle crush." However, it was not designed to "LITERALLY" crush cows.

These enclosures are used to restrain livestock in order to give farmers and veterinarians the opportunity to safely administer various types of care to the animal. These devices can be a customized in different ways to accomplish specific tasks, but are most commonly used to perform routine operations such as tagging, weighing, and vaccinating large animals. The piece of equipment in the viral photograph is likely a sort of "tilt table" which gives farmers better access to the hooves.

The research and marketing company Meat & Livestock Australia explained in a 2016 paper:

Cattle have to be constrained during routine operations, such as recording, vaccinating, ear tagging, weighing and animal health tasks (and possibly veterinary procedures). A cattle crush holds the animal immobilised to minimise the risk of injury to both the animal and the handler.

An effective livestock handling system requires a suitable choice from a wide range of commercially available cattle crushes. The operations to be performed will determine what features the crush will need, including veterinary sections, baulk gates, a squeeze mechanism or split side gates. Crushes to be used in the processing facility usually have more functions than those needed for hospital facilities.

Functionality and ease of use by handlers should be prime considerations. Operator safety may be improved if the squeeze section of the crush is operated hydraulically or pneumatically rather than manually. All crushes should be made according to good manufacturing standards using quality materials.

Cattle crushes can be equipped with ancillary equipment, such as chin bars and automated drafting systems. Electronic scales and a National Livestock Identification System (NLIS) identification reader are now standard in most feedlot cattle crushes.

Here's a video of a similar hydraulic cattle crush in action:


The viral photograph originated on the web site of Glendale Engineering, a company in the United Kingdom that specializes in the manufacture of livestock equipment. The accompanying description of this specific cow crush (which the company calls a "cattle turnover crate") focuses on the mechanics of the device:

This safe and stressless, easy to operate crate can be controlled using electro-hydraulics or by using the tractor spool valves. It is easy to transport and is galvanised for instant cleaning and longevity.

Photographs and videos of farming equipment are often met with incredulity by those unfamiliar with farm life. In April 2016, for instance, a video of a Fistulated Cow caused consternation as it was shared along with the largely inaccurate accusation that it showed a form of animal abuse.