Does an Image Depict the Texas Church Shooter at a Bernie Sanders Rally?

An image circulating on Facebook purporting to depict the Texas church shooter in Bernie Sanders regalia in fact does not. 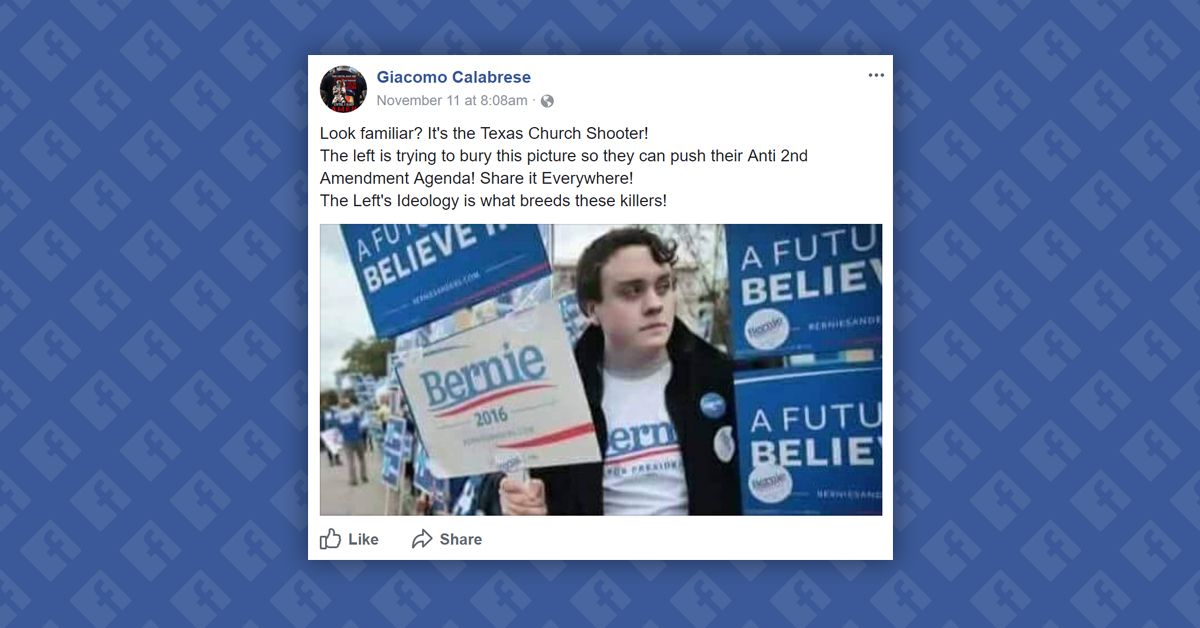 On 11 November 2017, Facebook user Giacomo Calabrese published a photograph he claimed depicted the perpetrator of the Sutherland Springs Church Shooting along with a status update: Calabrese asserted that "the left" was attempting to "bury" the damning photograph, and urged Facebook users to circulate it everywhere. Although some commenters responded with remarks such as "I hope it's true, but it looks photoshopped," others were not convinced. Headshots, side by side. On the left, an image from a January 2016 presidential election rally. On the right, Devin Patrick Kelley from an undated DMV photo.

One glaring aspect of the claim is the complete lack of resemblance between the young, dark-haired Bernie Sanders supporter depicted and the photograph of deceased suspect Devin Patrick Kelley, which is undated and could be several years old. Unless Kelley has Benjamin Button skills and can age backwards, the Bernie supporter looks considerably younger, less paunchy or hirsute in the image from early 2016. They also have differently shaped features, most noticably in their varying eyebrow density and the shape and size of their noses. Chin and jawline shape are more difficult to discern because of Kelley's thick beard; the Bernie supporter does not present any evidence of facial hair growth.

Going solely by physical features, images of Kelley did not remotely resemble the individual in Calabrese's shared photograph. Moreover, others pointed out that the photograph belonged to Getty Images and had accompanied a number of news articles published on 18 January 2016.

Information provided by Getty Images indicated that the image was captured on 17 January 2016 in Charleston, South Carolina (not Texas):

CHARLESTON, SC - JANUARY 17: Supporters of Democratic presidential candidates Senator Bernie Sanders (I-VT) and Hillary Clinton rally outside the Gaillard Center before the start of the NBC News Democratic Candidates Debate on January 17, 2016 in Charleston, South Carolina. This is the final debate for the Democratic candidates before the Iowa caucuses. (Photo by Scott Olson/Getty Images)

Calabrese did not provide any information explaining how he erroneously concluded that the widely-published news photograph of an unnamed Bernie Sanders supporter from January 2016 could have been the Texas church shooter because his political motivations are more clearly stated in his post—which may reveal with its true intentions were.

Budowsky, Brett.   "Sanders Wins Battle for Roosevelt-Kennedy Legacy While Clinton Attacks Him for It."     Observer.   18 January 2016.