Did U.S. Rep. Omar Say She 'Hates Living in America,' Was 'Better Off' in Refugee Camp?

Principled criticism of aspects of one's life in a country is not the same as expressing hatred of it. 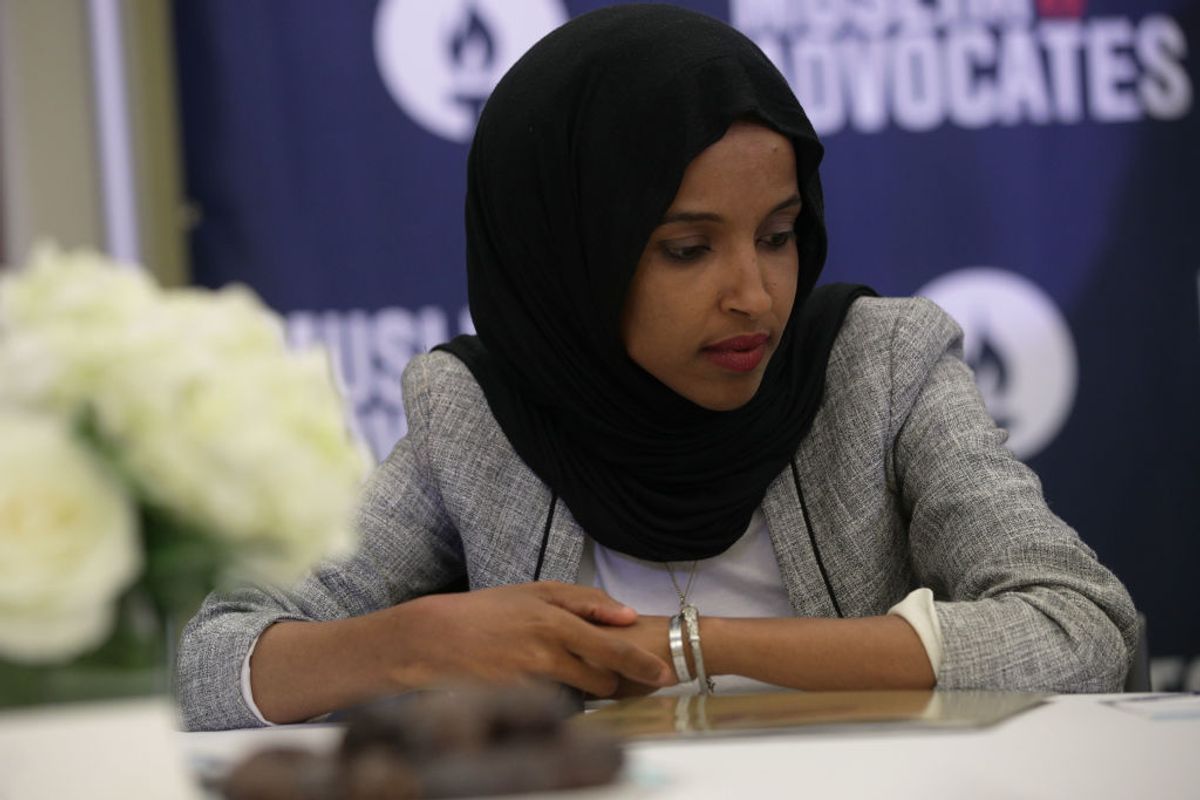 Claim:
U.S. Rep. Ilhan Omar once said she hated living in the United States and was better off in a refugee camp in Kenya (or words to that effect).
Rating:

In the spring of 2019, Facebook posts emerged that claimed U.S. Rep. Ilhan Omar (D-Minn.) had said she was "much better off" in a refugee camp in Kenya than she was in the United States, and that she "hates living" in her adopted country.

The meme was typically worded as follows: "Congresswoman Ilhan Omar said she was much better off in Kenya at a refugee camp ... she said she hates living in America." Another widely shared version of the meme added the words: "Deport her!":

In reality, Omar has not said she was "much better off" (or words to that effect) in a Kenyan refugee camp, nor that she "hates living in" the United States. Those descriptions appear to be a gross distortion of nuanced remarks Omar made in early 2019. They also feed into the narrative, largely cultivated by her right-leaning critics and opponents, that Omar — a naturalized U.S. citizen and one of the first two Muslim women ever to serve in Congress — is anti-American or part of a shadowy Muslim takeover of American institutions.

None of the memes mentioned above was accompanied by any sources, but they appear to have been referring to comments Omar made in early 2019.

Similar claims were put forth in a 3 April article from the right-leaning FrontPageMag website, which bore the headline "Omar Felt More Accepted in Kenyan Refugee Camp Than in U.S." and went on to state:

"In an interview with Vogue Arabia, Rep. Omar, a refugee originally from Somalia who became a U.S. citizen nearly 20 years ago, waxed nostalgic about her days in a Kenyan refugee camp. She spent four years there as a child before resettling in the United States. At the refugee camp, Omar said, she could express her full identity. She felt free to be herself, living amongst like-minded people who looked and believed as she did. 'When you’re a kid and you’re raised in an all-black, all-Muslim environment, nobody really talks to you about your identity,' Omar said. 'You just are. There is freedom in knowing that you are accepted as your full self. So the notion that there is a conflict with your identity in society was hard at the age of 12.'"

In her March 2019 Vogue interview, Omar did speak negatively about what she characterized as latent bigotry in American society being brought to the surface under the presidency of Donald Trump:

"'It’s challenging,' she says of living in President Trump’s America, where her status and heritage is constantly criticized. 'It’s an everyday assault. Every day, a part of your identity is threatened, demonized, and vilified. Trump is tapping into an ugly part of our society and freeing its ugliness.'"

However, in the same breath she expressed a determination to "uphold the values we [Americans] share -- that this is a society that was built on the idea that you could start anew. And what that celebrates is immigrant heritage."

Omar also recalled the contrast she perceived as a child between her comfort as a black, Muslim girl surrounded by her black, Muslim family, and the ways in which those parts of her identity became a source of conflict for her in the U.S.:

"'[Arriving in the U.S.] was the first time that all of the identities I carried and had pride in, became a source of tension,' she recalls. 'When you’re a kid and you’re raised in an all-black, all-Muslim environment, nobody really talks to you about your identity. You just are. There is freedom in knowing that you are accepted as your full self. So the notion that there is a conflict with your identity in society was hard at the age of 12.'"

(In the past, Omar has recalled suffering racially and religiously motivated bullying when she and her family lived in Arlington, Va., before settling in Minneapolis).

In her Vogue interview, Omar did not say she hated living in the U.S., nor that she felt she was "better off" while living in a refugee camp in Kenya, as the meme falsely claimed. Rather, she offered a nuanced and somewhat critical appraisal of her personal experience of both arriving in the U.S. as a child and living in the U.S. in 2019, while also articulating a desire to promote American principles.

What is surprising is the extent to which her narrative consists of complaints about the intolerance, racism, inequity, and filth that she found when she came to the United States, and since. Gratitude, for the country and the people who saved and welcomed her family, is largely absent from her telling. Interviewed on the popular Pod Save America podcast, Omar explained that when her family was preparing for resettlement in America, they watched orientation videos “about the life that they are to expect once they arrive here ... happy families, and dinner tables where there is an abundance of food, images of happy young children running off to their school buses ... images of a country where people are happy and leading a life that is prosperous. You are really looking forward to life as you see it on that screen.”

Life in America was not like the images she saw in the welcome video, Omar insists. “When we landed,” she recalls, “I saw panhandlers on the side of the streets, there being trash everywhere, and graffiti on the side of the walls.” Omar asked her father why America fell so short of what she had been promised, and he told her to “hold on, we will get to our America.”

Barron quoted accurately from Omar's interview on Pod Save America, which can be heard here. However, his characterization of her remarks also conflated hatred or antipathy towards the United States with criticism of the ways in which the country does had not — in Omar's view — lived up to its promise.

The Minnesota congresswoman frequently talks in such terms, expressing a determination to, in her perception, bring the reality of American society closer to the image and ideals of prosperity, justice, and egalitarianism that many Americans hold dear. Over the years, many American citizens and politicians, like Omar, have advocated for social and economic reforms in exactly that way.

President Trump, for example, provided in his 2017 inauguration speech a rather bleak and critical appraisal of the current state of affairs in American society, declaring:

"... For too many of our citizens, a different reality exists: mothers and children trapped in poverty in our inner cities, rusted-out factories, scattered like tombstones across the landscape of our nation, an education system flush with cash but which leaves our young and beautiful students deprived of all knowledge, and the crime, and the gangs and the drugs that have stolen too many lives and robbed our country of so much unrealized potential. This American carnage stops right here and stops right now."

Furthermore, March and April 2019 opinion columns that appear to have inspired the claims contained in the memes took some of Omar's principled criticisms of aspects of American life -- a longstanding feature of American public discourse -- and misrepresented them as expressions of anti-Americanism or a preference for living in a refugee camp over living in the U.S.