Are People Identifying as 'Clovergender'?

The term was evidently created by pranksters in order to mock individuals of non-binary gender. 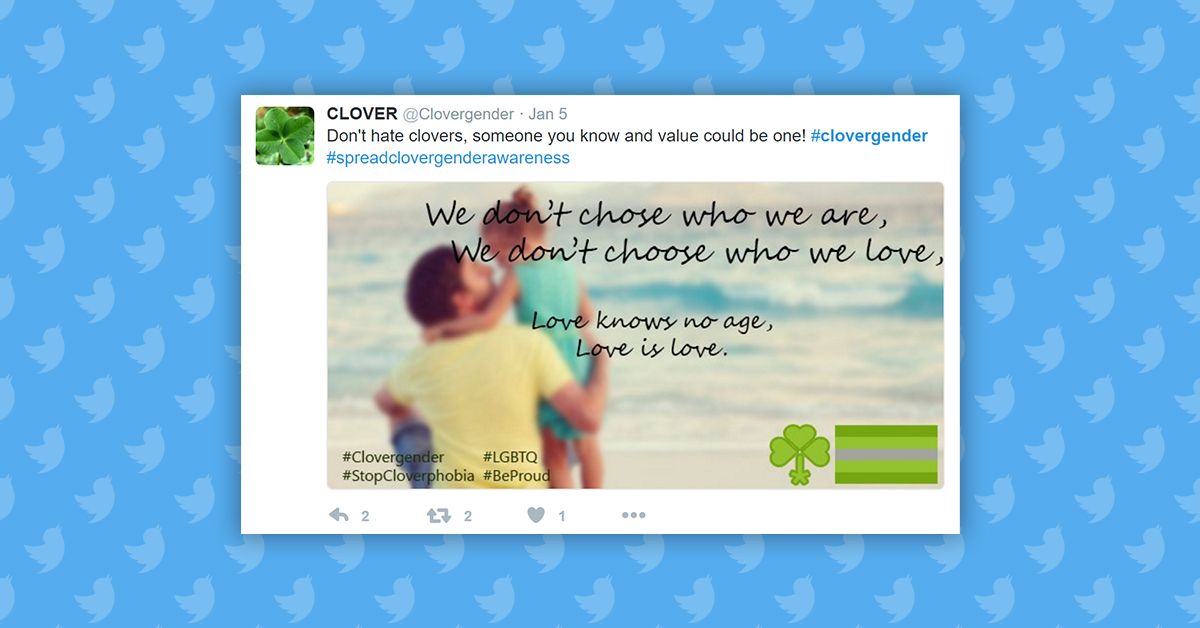 Claim:
Individuals are legitimately identifying as and calling for acceptance of a new identity known as "clovergender."
Rating:

In early 2017 discussion of a new identity known as "clovergender" began appearing on social media, perhaps most prominently in a series of tweets published by "pharmabro" Martin Shkreli: On 1 January 2017 the term appeared as in a Reddit thread, alongside a screenshot defining "clovergender" as adults attracted to children: Separate Reddit threads debated the existence of "clovergendered" people, based on "evidence" clovergendered individuals were present on social media. At first, many people appeared to take the claim literally without questioning whether the new gender was a hoax:

"Excuse me officer I'm actually clovergender. Have fun in jail bigot for trying to seperate me and my 10 year old girlfriend." pic.twitter.com/LwNYjMBUHz — Lauren Southern (@Lauren_Southern) January 4, 2017

A Facebook page created purportedly argued for the recognition of "clovergender" as separate from pedophilia:

Normally, legitimate but lesser-known sexualities and gender identities accrue a presence on the Internet (such as in forum threads or social media mentions) before becoming a widespread topic of discussion. We should point out that the definition of "clovergender" does not describe any form of gender, but a sexual identity generally accepted as deviant. That the concept appeared from the ether on or around 1 January 2017 strongly suggests it was a hoax.

Several users captured 4chan screenshots from 31 December 2016 and 1 January 2017 demonstrating that the "clovergender" idea was cooked up by resident pranksters in an attempt to mock individuals of non-binary gender (i.e., transgender people, gender fluid people, and people of alternate gender): The "clovergender" hoax was referenced on subsequent 4chan submissions, prompting users to reiterate that the claim was a hoax. (The "clover" symbol has long been associated with 4chan.) Concurrent threads discussed building upon the non-existent gender identity to further agitate and aggravate the individuals targeted by the prank. The underlying intent of the clovergender hoax appeared to be undermining the legitimacy of transgender identity, by suggesting its existence enabled anyone to normalize any behavior or trait (even the most taboo practices) as a "gender." The hoax is apparently part of a years-long tradition on the part of 4chan and 8chan to dupe the media and social media with fantastical claims of non-existent trends and events.

Prior to inventing a "clovergender" in 2016, the same groups fooled many people into believing Hillary Clinton tweeted a #DraftOurDaughters hashtag. Pranks in 2015 included circulation of misinformation about Black Lives matter demonstrations, a "White Student Union" hoax trend, and the production of a massively popular anti-refugee video. Earlier efforts included claims that "feminists" were attempting to forgo menstrual hygiene products, end father's day (reported by Fox News as a genuine campaign), and that women were dangerously seeking to achieve a "bikini bridge." Like those previous hoaxes, a great many social media users were immediately skeptical of attempts to pass off clovergender as a sincere gender identity.