The 'I Am Your Father' 1980 Audience Reaction Video Is Fake, But We Found a Real One

The viral "Star Wars" video featured a fake cinema reaction to Darth Vader's infamous line from "The Empire Strikes Back." Here's how we know it's fake. 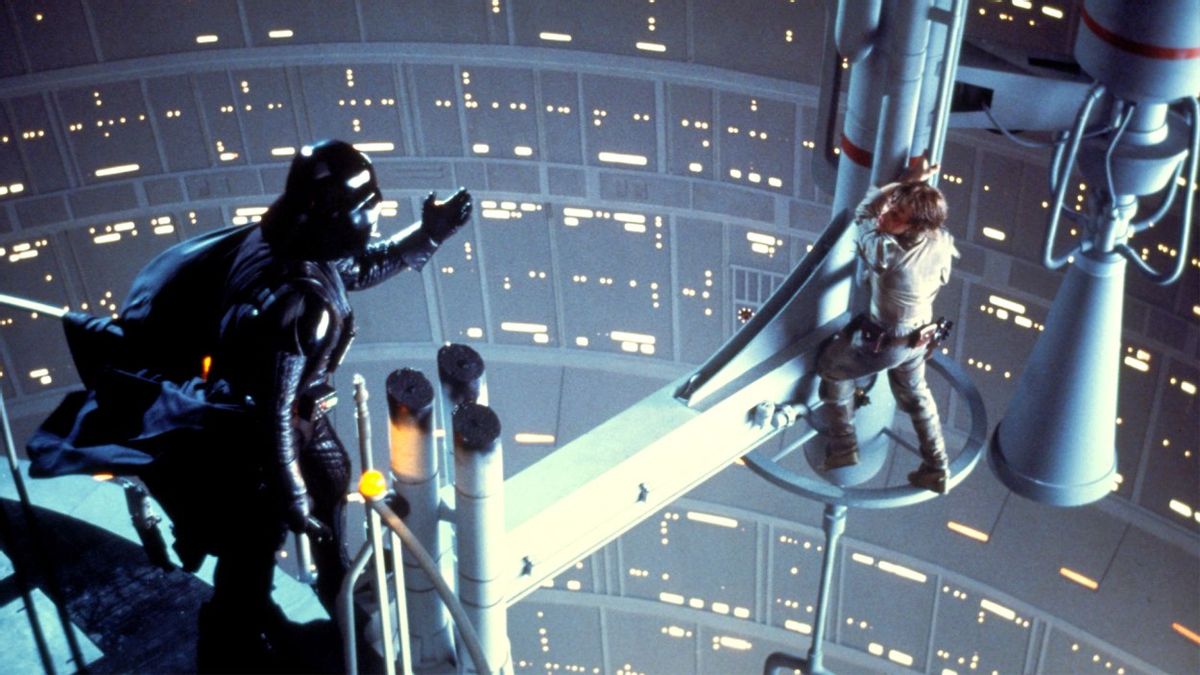 Claim:
A video posted online includes sound that was recorded inside a movie theater in 1980 during the pivotal "I am your father" scene from "The Empire Strikes Back."
Rating:

It's true that real audio exists of an audience's reaction to 1980 cinema screening of "The Empire Strikes Back." As of 2021, a video with the sound only had 29,000 views.

However, a different video showing the same scene with Darth Vader and Luke Skywalker went viral, misleadingly using sound from an audience's reaction to part of 2018's "Avengers: Infinity War." As of 2021, the video with the misleading audio had been played tens of millions of times.

On Jan. 3, 2020, a YouTube video was uploaded that purported to show a movie theater's 1980 audience reaction to Darth Vader's pivotal "I am your father" line of dialogue from "Star Wars Episode V: The Empire Strikes Back." The video title read: "'I am your Father' - Cinema Reaction (1980)." The description claimed that it was "found in Goodwill in January 2017."

As of July 2021, the viral video was nearing 10 million views and had likely been played millions of more times after being reposted elsewhere.

The only problem: The sound was fake.

The sound of audience members gasping and saying "no!" appeared to be captured in a movie theater during an important and spoiler-filled scene near the end of 2018's "Avengers: Infinity War." The same reaction heard in the doctored video above at the 0:57 mark can be listened to in the video below beginning at the 25:40 point:

The misleading "Star Wars" video has also been endlessly reposted on TikTok, earning an unknown number of total views.

Unfortunately, the doctored and very viral video overshadowed a real recording from the film's initial release. It was captured on audio cassettes inside a movie theater in 1980. That genuine recording was combined with video of the "I am your father" scene, and begins at the 4:10 mark in the video below:

The video only had 29,000 views, around 310 times less than the fake clip. The real audience reaction seemed to feature silence and shock at Darth Vader's famous line, perhaps with audience members not knowing if he was telling Luke Skywalker the truth.

The 1980 audio cassette recording was first posted in 2011 by the user morgands1 on the website originaltrilogy.com, who also purportedly recorded audio of an audience reacting to 1977's "Star Wars Episode IV: A New Hope":

While I’d remembered doing a similar in-theatre recording at a 70mm screening of "The Empire Strikes Back" in 1980, I did not have the tapes and figured they had not survived.

I recently located the raw right and left channel tapes, and have put them together, using a different process than I’d done with the reel-to-reel deck three decades ago.

Transferring both channels into WAV files, I used the right channel as a guide track and sped up/slowed down the left channel to sync as closely as I could, though it’s not always perfect. There are still sync and phasing issues, and a few dropouts, but the sound is good enough to provide a window on how the film existed in a 70mm engagement in the summer of 1980.

As previously mentioned, there also appeared to be a real audio recording from a 1977 screening of "Star Wars Episode IV: A New Hope."

YouTube user William Forsche posted the audio in 2013. The audio recording captured his mother's reaction as well. "Hearing her laugh (@ 0:42 & @ 2:54) and cheer with me and the rest of the audience is absolutely priceless to me," Forsche said.

Perhaps the most priceless moments of Forsche's recording came when Han Solo swooped in to save the day and also at the end of the clip when moviegoers could be heard walking to their cars after the movie ended. Forsche said: "You can also hear me making laser beam sounds at the end of this recording, because 'Star Wars' got me all fired up!"

As for the rumor about "The Empire Strikes Back," in sum, the viral video that claimed to feature a 1980 cinema audience reacting loudly to "I am your father" was fake. However, a real audio recording from 1980 really does exist, but the audience was quiet, not vocal, after Darth Vader's pivotal line of dialogue.

Previous Article
Next Article
Article 9 of 19 in Collection