Is This Photo of Windows Holding Back Hurricane Ian Floodwaters Real?

A popular tweet with more than 300,000 likes showed a picture of three windows appearing to withstand the pressure of Hurricane Ian's floodwaters. 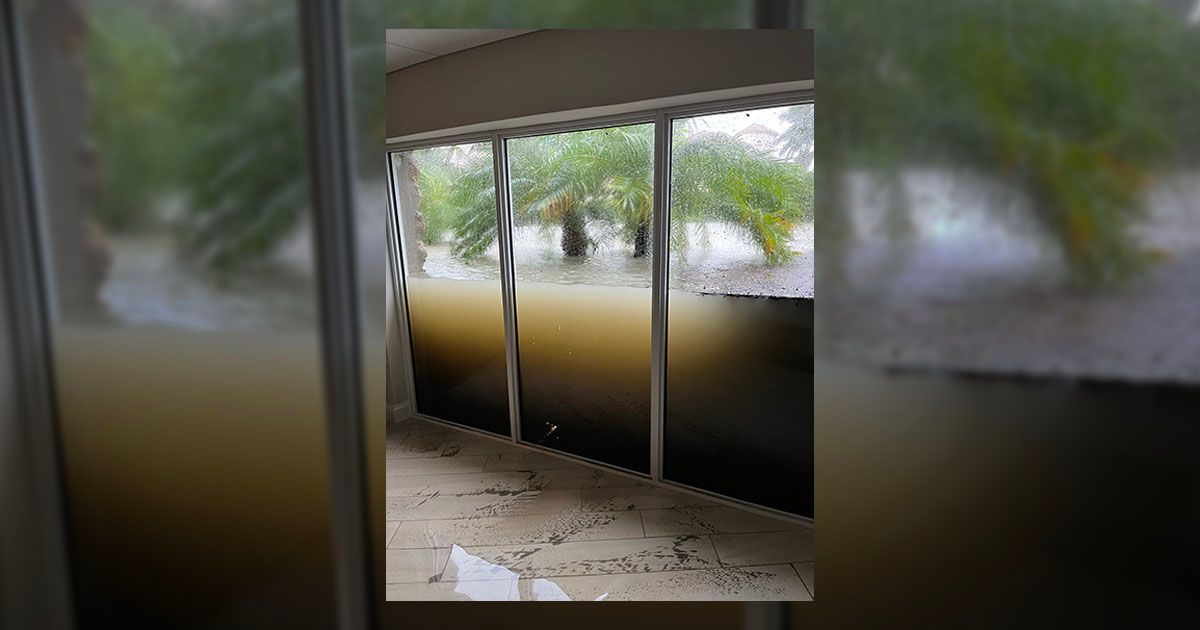 A photograph shows three windows holding back floodwaters from Hurricane Ian, according to Reddit. (Image Via @bothcoasts/Twitter)

On Oct. 1, 2022, a Twitter user posted a photograph of three unbroken glass windows supposedly withstanding the weight of heavy flooding from Hurricane Ian. The photo showed floodwaters several feet high with the tops of palm trees visible above the surface. The late September storm led to massive devastation throughout the state of Florida as well as quite a few online rumors, such as the purported sightings of a shark and an orca being spotted in flooded streets.

Many of the replies on social media made jokes about aquariums, praised the contractor or construction crew who built the building, and discussed the possibility that the windows in the photo were hurricane windows.

The Twitter caption for the picture of the glass windows and flooding claimed that it was captured in the city of Naples in the aftermath of Hurricane Ian. The account's bio showed the name Dixie Whatley as well as a website for Dixie Whatley Studios.

Whatley also posted the photo on Instagram with the caption, "We weathered the storm in Naples, Florida. This is my favorite photo, through the window of our social room going out to the pool. We are right on the beach, and stayed in our top floor (14th) condo through the storm. Had quite the birds-eye view."

By email, Whatley told us that the photo was taken by her neighbor, Tom Lisa. "I went down and and saw it," she told us. "Here is a photo of the same window after the water receded. Although the windows held magnificently, the water came in later through the basement and flooded the room." Whatley sent three photos of the aftermath of the storm. The blue tape likely indicated spots where specialists detected water damage inside the walls through the use of moisture meters. While the windows held up tremendously, Whatley noted that water found its way inside the building through the basement.

Before Whatley responded to our email, we were able to connect the dots between Whatley's publicly-available mailing address with elements from her Instagram post, such as the "social room" and her mentioning of the fact that she lives in a multi-story building "right on the beach." All of this lined up and we confirmed that the photo was real.

Some users responded that the same picture had also showed up on Reddit in the subreddit r/Damnthatsinteresting. The Reddit post had a title that read, "Not the beautiful Florida view anyone imagined! Courtesy of Hurricane Ian." Reddit user u/dragracedave, the person who made the post, also said in a comment, "It is an absolute mess down here! This is the worst storm I have ever experienced in this area by far, it's going to take months until everything is finally sorted out :(."

It's unclear if u/dragracedave knew Whatley, but it was possible they lived near each other or were acquainted in some other manner. We will update this story if we receive a response from the Reddit user.

We would be remiss to not mention that the picture of the windows purportedly holding back the floodwaters from Hurricane Ian was also later posted to the r/photoshopbattles subreddit. The subreddit challenges users to put their design skills to work with Adobe Photoshop. The top-voted altered photo of the flooding added an alligator (or crocodile), as if the animal was about to come through the windows. The second-place submission showed a joke on the American South's love of sweet tea.

On Oct. 5, 2022, Whatley responded to our email and provided photos of the aftermath of the storm, telling us that water still found its way inside the walls of the room after the basement flooded.