Does This Video Show Hummingbird Helping Another Bird?

The bedazzled birds are notoriously territorial. 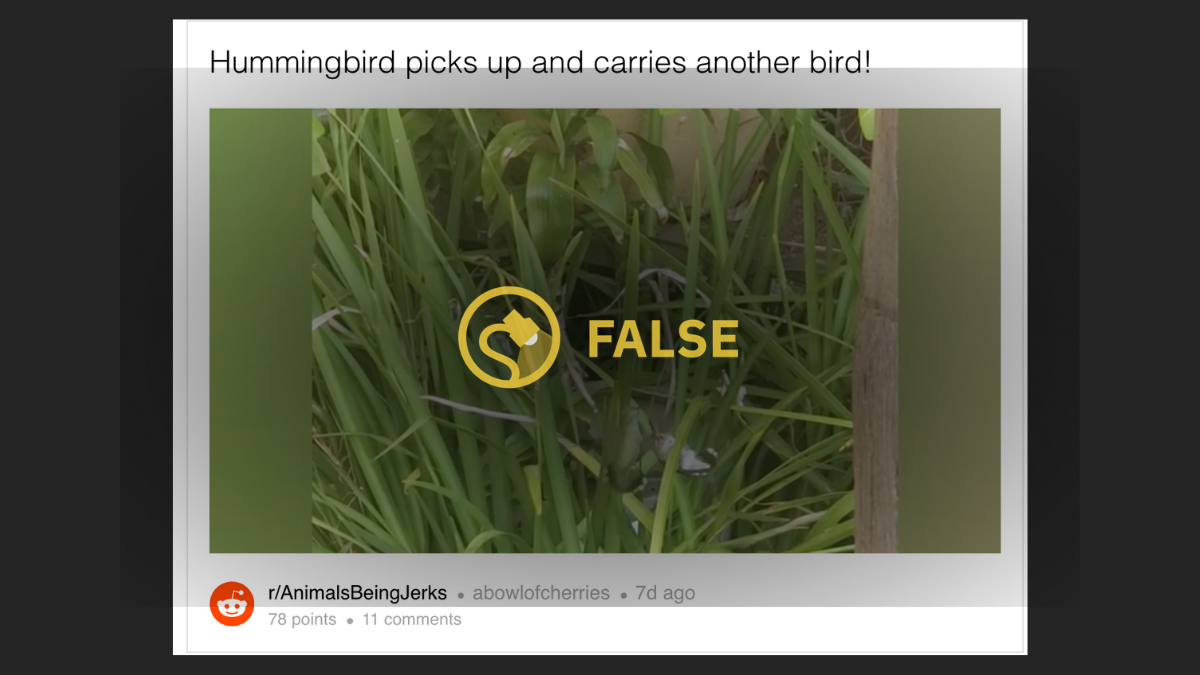 Claim:
A video shared to Reddit in April 2021 showed a helpful hummingbird trying to “carry away an injured bird.”
Rating:

A video that was shared to Reddit in mid-April 2021 showed two hummingbirds clinging to one another as they gradually fell toward the ground.

“Rescuer or attacker?” read a caption laid over the video. “Hummingbird picks up and carries another bird!”

Comments on the video posited various theories, from hypothesizing that the behavior was sexual or perhaps one bird helping a young fledgling that had fallen from the nest. But as it turns out, the behavior was more likely a battle of sibling rivalry. In an email, Geoff LeBaron, director of the Christmas Bird Count at Audubon, told Snopes that the two birds captured on the video were likely immature birds recently out of the nest.

“Given how feisty hummingbirds are in general and having witnessed lots of sibling fights among many different hummingbird species, this video seems to me to be an especially forceful version of that,” said LeBaron.

“I think both birds were tussling, one grabbed the second while both were flapping away, and when the vanquished sibling stopped flapping, the victor was unable to maintain flight, and that's when they dropped into the vegetation. The lower perched bird looks pretty disheveled, but I suspect they both flew off afterward and went back to whatever the nectar source was they were tussling over.”

Despite their small stature, hummingbirds have stout personalities. Hummingbirds — so-named for the sound made by their wings — are some of the smallest birds in the world, yet they are “fiercely territorial,” according to The Cornell Lab of Ornithology. Because one of their primary sources of nutrients comes from flower nectar, hummingbirds are notoriously territorial, especially so in the spring when flowers are just beginning to bud. And not just any nectar will do. Hummingbirds will only seek nectar that has a sugar content of 10% or higher, consuming up to twice as much of their body weight in nectar each day to keep up with their high metabolism, according to the University of Illinois.

And because hummingbirds will typically lay between one and three eggs per nest, it’s most likely that the dueling duo in the video were siblings fighting over resources.