Was This Hummer Fire Related to Gas Shortage?

Advice from May 2021: Don't store gas in plastic bags and keep fuel away from open flames. 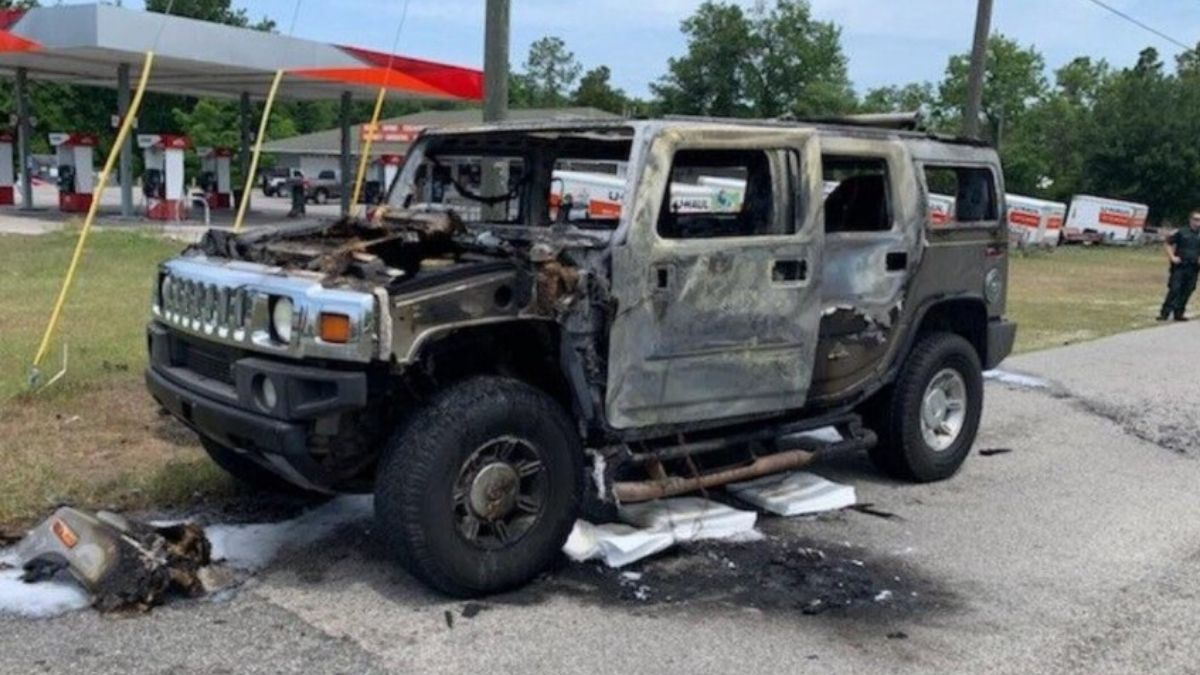 Claim:
A photograph shows the aftermath of a Hummer vehicle fire that was started after the driver lit a cigarette, igniting four canisters of gas just loaded into the back of the vehicle due to a fuel shortage in the area.
Rating:

A Hummer caught fire in May 2021 after the driver loaded canisters of gas into the back of the vehicle.

An official cause of the fire has not been announced, so it's unknown if a cigarette started this fire.

On May 13, 2021, a photograph supposedly showing the aftermath of a Hummer vehicle fire in Florida was circulated online along with claims that the driver had accidentally started the blaze after lighting a cigarette, which ignited the fuel tanks just loaded into the back of the vehicle due to a gas shortage in the area: As this picture circulated online, some were skeptical of its origins. After all, viral photographs supposedly showing people hoarding gasoline in plastic bags proved to be several years old.

This picture, however, is both genuine and recent. It shows the aftermath of a vehicle fire in Florida in May 2021. We don't know the exact cause of the fire (if it was really started by the driver lighting a cigarette) but local news reports indicate that this Hummer was truly loaded with a few extra tanks of gasoline the driver had purchased amidst concerns of a gas shortage in the area.

The Citrus County Chronicle reported that this incident occurred outside a Texaco Food Mart in Homosassa, Florida, on the morning of May 12. The official cause of the fire has not been announced, but the Citrus County Fire Rescue found four 5-gallon containers of gasoline in the back of the vehicle.

Citrus County Fire Rescue crews were dispatched to a vehicle fire in the late morning hours Wednesday, May 12, according to a CCFR spokeswoman.

The call came in at 10:52 a.m., reporting a Hummer was on fire at South Alabama Avenue and West Grover Cleveland Boulevard in Homosassa.

The occupant of the vehicle had just filled up gas cans at the Texaco Food Mart on West Grover Cleveland Boulevard, Marsh said. Engine 3 from Homosassa arrived on scene at 10:59, and the blaze extinguished at 11:09 a.m.

A photograph from the fire department below shows the charred gas containers in the back of the vehicle.

One person was injured. While the severity of this person's injuries aren't known, the Citrus County Chronicle noted that the person refused to be transported to a hospital against medical advice.

This fire took place about a week after the Colonial Pipeline, an oil pipeline that serves much of the Southeastern United States, shut down its operation after experiencing a ransomware attack. This interruption in service led to some people buying and hoarding excess gasoline, which further exacerbated the gas shortage issue in the area. Correction [May 14, 2021]: A previous version of this article incorrectly said the incident occurred in Alabama; the correct state is Florida.