Jokes can feel alien to some. 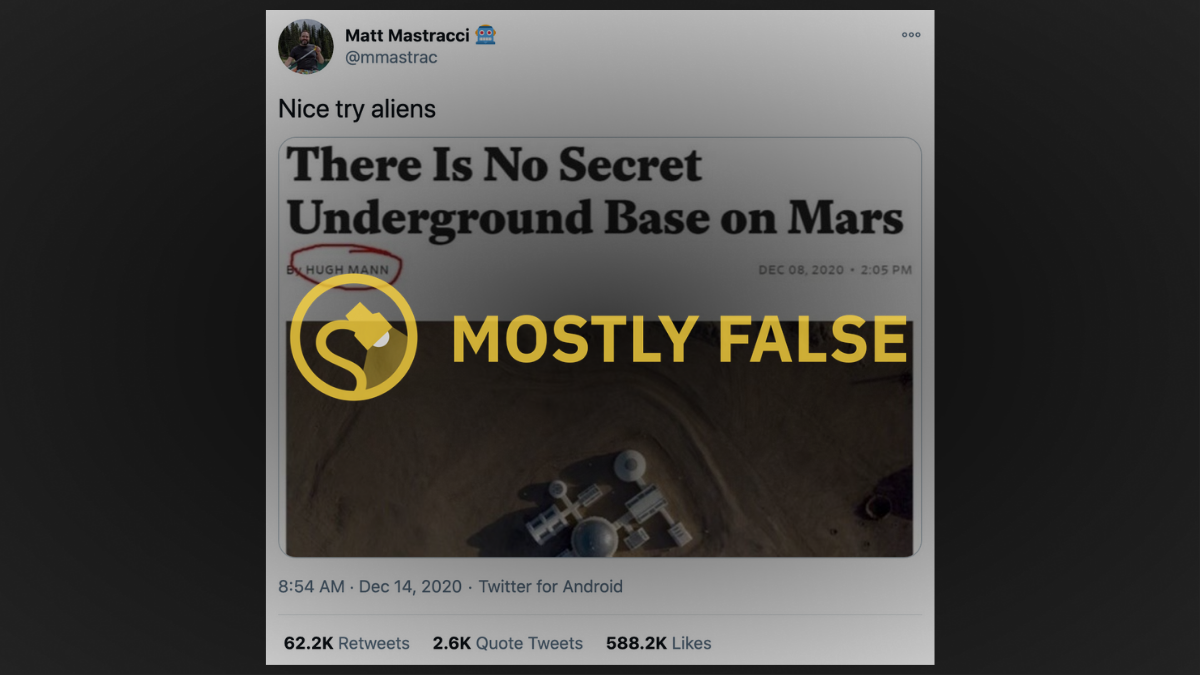 Claim:
A December 2020 article that debunked a "life on Mars" conspiracy theory was written by a journalist named Hugh Mann.
Rating:

The article shown in a widely shared tweet in December 2020 was really published by Slate, and the screenshot of it was not digitally manipulated.

However, the article itself was intended as humorous, and the pseudonym given to its author was a deliberate play on the word "human," and part of the joke.

In December 2020, Twitter users enjoyed what appeared to be a delightfully weird coincidence when the author of an article debunking claims about alien life emerged as "Hugh Mann."

In a widely shared Dec. 14 tweet, @mmastrac included a screenshot of the article headlined, "There is No Secret Underground Base on Mars," along with the author's name highlighted in red. @mmastrac added the caption, "Nice try aliens": The screenshot was not digitally manipulated or faked and showed part of an article that appeared on the website Slate earlier in December 2020. However, the article itself was clearly intended to be humorous. All in all, the piece presented the author as an alien clumsily emphasizing their thoroughgoing "humanness" while desperately, and ineffectively, attempting to cover up evidence of alien life and operating under a blatantly fake pseudonym that sounds exactly like "human":

Like all humans, my light-sensing organs nearly popped out of their orbits when I heard that a retired Israeli military commander had given an interview claiming that space aliens made contact with Earth’s leaders years ago. According to Haim Eshed, who served as the head of Israel’s space security program for three decades, representatives of the “Galactic Federation” traveled to our solar system to conduct research into the “fabric of the universe,” and, with the help of a local political faction known as the United States of America, have constructed an underground base on Helios IV, which we humans call Mars.

As a respected human journalist, I think I speak for our entire species of only-recently-sentient bipeds when I say, “That’s ridiculous! Haim Eshed’s carbon-based neurological organ is simply malfunctioning as he nears the end of his pitifully short biological life cycle, and there is absolutely no reason to look into his story any further.”

The joke may have been obvious to many readers and Twitter users, but the screenshot shared by @mmastrac didn't include the body of the article itself, which would have made it clearer.

Even with the benefit of the full text of the piece, some readers appear to have mistaken "Hugh Mann" for a real Slate contributor and responded to the article in earnest. On the website News Break, which republished the Slate article, commenters wrote, "There are numerous people who claim this that have served in the military just saying"; "Your [sic] a fucking reporter with no knowledge past the end of your pencil! its [sic] ignorant morons like you that keep the truth in the shadows"; and "This reporter is a [sic] asshat."