Is it True Trump 'Took Down ISIS' While 'Biden Took Down Dr Seuss and Mr Potato Head'? 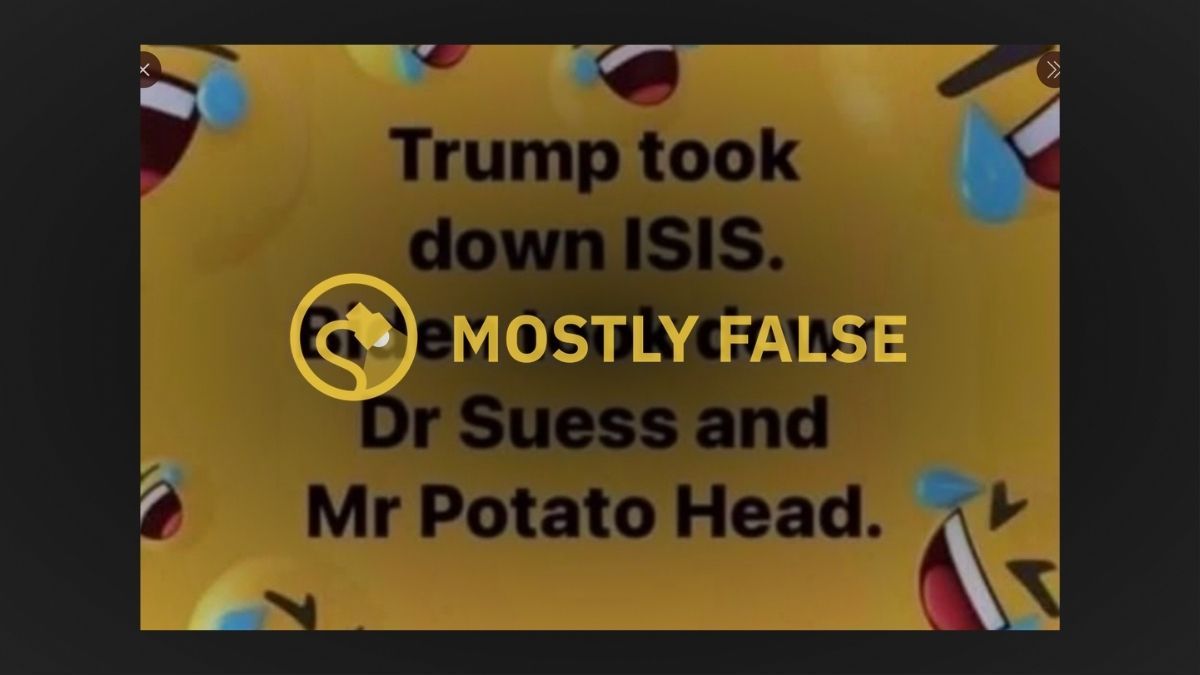 The Islamic State group sustained major losses and setbacks during the Trump administration but was attempting a comeback in early 2021.

Trump was not entirely responsible for the losses sustained by the Islamic State group. Further, Biden himself was not responsible for a takedown of Mr. Potato Head and Dr. Seuss in early 2021 for insensitivity. Comparing the vastly different situations described in a popular meme was misleading.

Since the beginning of U.S. President Joe Biden’s administration, comparisons to his predecessor former President Donald Trump have been inevitable, particularly from conservatives. The official Twitter account of former Arkansas Gov. Mike Huckabee, for instance, shared a meme that compared the two presidents’ records. While Huckabee’s official account did tweet this meme, its contents are exaggerated, false, and misleading. We’ll break them down below:

Did Trump Take Down ISIS?

This broad statement does not take into account the many regions the Islamic State group (IS) has been operating in, and its constantly evolving status. Trump had already declared that IS was defeated on Dec. 19, 2018. Just under a year into Trump’s administration, IS had lost most of its territory in Iraq and Syria, though this was a continuation of the American effort against IS under Obama. The era of IS under Abu Bakr al Baghdadi ended with his death in a U.S. raid in northern Syria on Oct. 26, 2019.

But by October 2020, reports had emerged of a surge in IS attacks in regions of Africa, where the group was attempting a comeback. Officials and experts largely agreed that the group was still alive but had merely shifted its operations to other parts of the world.

The claim that Trump has taken down all of IS is therefore false.

Did Biden Take Down Dr. Seuss and Mr. Potato Head?

The comparison is very misleading. Biden himself was not responsible for the changes instituted regarding Mr. Potato Head’s name. In late-February 2020, Hasbro, the toy company behind Mr. Potato Head, announced that it would be dropping “Mr.” from Potato Head. The company clarified that while Mr. and Mrs. Potato Head would still be sold in stores, they would sell a new playset in the fall without the Mr. and Mrs. designations. Pinning this on Biden seems more than a little far-fetched.

Dr. Seuss has also been facing his own controversy, after some Virginia schools said they would be de-emphasizing studying his books on Read Across America Day, which fell on March 2, the author’s birthday. His books have been reevaluated as the company that manages his legacy announced it would no longer be publishing six of his works that contained racist and insensitive imagery. And in his speech on Read Across America Day, Biden did not mention Dr. Seuss, even though his predecessors Trump and Obama made references to the famed author in their speeches.

Ultimately, comparing a president’s purported takedown of an international militant organization carried out over a four-year term to a president who is barely two months into office for takedowns of cultural icons that he was not really responsible for is false and misleading. We rate this claim as "Mostly False."