Does This 1950s Economics Book Teach How to Be a Good Wife?

A list of ten steps on how to be a good wife was said to come from a 1950s high school home economics textbook. 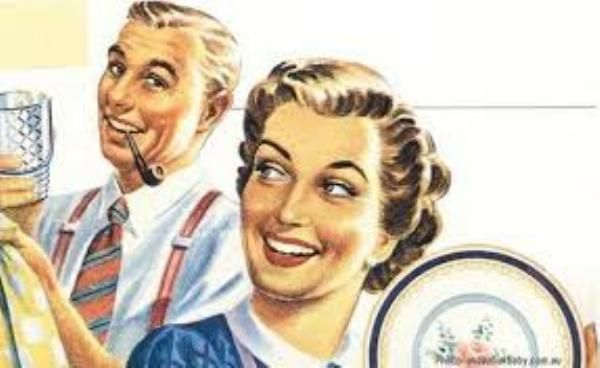 Claim:
A list of ten steps on how to be a good wife comes from a 1950s U.S. home economics textbook.
Rating:

It has become fashionable to portray outdated societal behaviors and attitudes — ones we now consider desperately wrongheaded — to be worse than they really were as a way of making a point about how much we've improved. When we despair over the human condition and feel the need for a little pat on the back, a few startling comparisons between us modern enlightened folks and those terrible neanderthals of yesteryear give us that. We go away from such readings a bit proud of how we've pulled ourselves up by our bootstraps and with our halos a bit more brightly burnished.

The juxtaposition of wonderful modernity with a tawdry past also serves to reinforce the 'rightness' of current societal stances by making any other positions appear ludicrous. It reminds folks of the importance of holding on to these newer ways of thinking and to caution them against falling back into older patterns which may be more comfortable but less socially desirable. Such reinforcement works on the principle that if you won't do a good thing just for its own sake, you'll surely do it to avoid being laughed at and looked down upon by your peers.

A typical vessel for this sort of comparison is the fabricated or misrepresented bit of text from the "olden days," some document that purportedly demonstrates how our ancestors endured difficult lives amidst people who once held truly despicable beliefs. Want to prove that American slaveholders were even more vile than we could possibly imagine? Just point people to the apocryphal Slave Consultant's Narrative. Remind someone what easy lives we lead these days by showing him an alleged list of rules for teachers from 1872. Or poke fun at Victorian sexual attitudes (or modern day feminism) by trotting out a piece of Advice to Young Brides.

Yet another piece of "olden days" text, typically titled "How to Be a Good Wife" or "The Good Wife's Guide," is said to have originated with a 1950s-era home economics textbook. Is it real, or is it yet another of those "look how far we've come" fabrications?

The following is from a 1950's home economics textbook intended for high school girls, teaching them how to prepare for married life:

1. Have dinner ready: Plan ahead, even the night before, to have a delicious meal — on time. This is a way of letting him know that you have been thinking about him, and are concerned about his needs. Most men are hungry when they come home and the prospects of a good meal are part of the warm welcome needed.

2. Prepare yourself: Take 15 minutes to rest so you will be refreshed when he arrives. Touch up your makeup, put a ribbon in your hair and be fresh looking. He has just been with a lot of work-weary people. Be a little gay and a little more interesting. His boring day may need a lift.

3. Clear away the clutter. Make one last trip through the main part of the house just before your husband arrives, gathering up school books, toys, paper, etc. Then run a dust cloth over the tables. Your husband will feel he has reached a haven of rest and order, and it will give you a lift, too.

4. Prepare the children: Take a few minutes to wash the children's hands and faces if they are small, comb their hair, and if necessary, change their clothes. They are little treasures and he would like to see them playing the part.

5. Minimize the noise: At the time of his arrival, eliminate all noise of washer, dryer, dishwasher or vacuum. Try to encourage the children to be quiet. Be happy to see him. Greet him with a warm smile and be glad to see him.

6. Some Don'ts: Don't greet him with problems or complaints. Don't complain if he's late for dinner. Count this as minor compared with what he might have gone through that day.

7. Make him comfortable: Have him lean back in a comfortable chair or suggest he lie down in the bedroom. Have a cool or warm drink ready for him. Arrange his pillow and offer to take off his shoes. Speak in a low, soft, soothing and pleasant voice. Allow him to relax and unwind.

8. Listen to him: You may have a dozen things to tell him, but the moment of his arrival is not the time. Let him talk first.

9. Make the evening his: Never complain if he does not take you out to dinner or to other places of entertainment; instead, try to understand his world of strain and pressure, his need to be home and relax.

10. The goal: Try to make your home a place of peace and order where your husband can relax.

We know the graphic reproduced above (supposedly from the 13 May 1955 edition of a magazine called Housekeeping Monthly) is a fabrication: It didn't first appear until well after the "How to Be a Good Wife" list had begun circulating via e-mail, and it's clearly a mock-up produced by adding the text of the e-mail around an image taken from a 1957 cover of John Bull magazine. (The image itself even bears an "Advertising Archives" legend along its side, indicating its source.)

As for the text itself, nobody has turned up the infamous textbook that supposedly included these ten steps. The list is often attributed to Helen B. Andelin's book Fascinating Womanhood, first published in 1963 to provide instruction in "The Art of Winning a Man's Complete Love," but no such list appears in that work.

However, before we head off to go dancing in the streets over this, safe and secure in our knowledge that this list of housewifely tips was just a bit of cooked-up nonsense, we'd better take another look at the wife's role in the 1950s. And before we entirely write off Fascinating Womanhood as the source of the piece now in circulation, let's take a peek between its covers, because it certainly contains plenty to make everyone from the diehard feminist to the "start the revolution without me" matron shudder, including these entries from a list of "DO's and DON'TS":

DO:   Accept him at face value.

DO:   Admire the manly things about him.

DON'T:   Show indifference, contempt, or ridicule towards his masculine abilities, achievements or ideas.

DO:  Recognize his superior strength and ability.

DON'T:   Try to excel him in anything which requires masculine ability.

DO:   Be a Domestic Goddess.

DON'T:   Let the outside world crowd you for time to do your homemaking tasks well.

DO:   Work for inner happiness and seek to understand its rules.

DON'T:   Have a lot of preconceived ideas of what you want out of life.

DO:   Revere your husband and honor his right to rule you and your children.

DON'T:   Stand in the way of his decisions, or his law.

We don't want to believe any woman, even half a century ago, was willing to submit herself to a life of servitude in order to be considered successful at her "most important role in life," that of the wife. And we certainly don't want to believe our schools were used to inculcate young women with these skewed notions of the proper role for women. Yet we'd be wrong on both counts: Women did, and young gals were.

Whether the piece at hand is a genuine excerpt from a yet-undiscovered home economics textbook, it is nonetheless a relatively accurate reflection of the mainstream vision of a woman's appointed role in post-war America, as evinced by such educational training films as "The Home Economics Story" (made familiar to a whole new generation of youngsters through its spoofing on the popular Mystery Science Theater 3000 program).

We needn't paint a mental picture of those times as being one of master and slave, "his every whim a command, his every utterance golden," because they weren't. But it is true in those days a woman's province was understood to be the home. To her fell the housework and the childrearing, tasks considered her indisputable purpose in life, her highest calling; not something voluntarily undertaken.

It was seen as only right and proper that the wife should keep the home running smoothly, making it a quiet haven of peace and joy for her husband, the breadwinner. Her role in the marriage, though still important, was simply not considered to be on the same level as his. Certainly, the tribulations of running a home were never to be openly compared with a man's daily travails. He earned money, she didn't; thus his work was important.

So, given all that, how to view this ten-point list which supposedly came from a 1950s home economics textbook? After having leafed through Fascinating Womanhood, I want to see it as a condensation of the worst of this particular "joy through subservience" era, a precipitate that showcased only the most servile aspects of what women were led to believe was their right and proper function (all the parts that didn't portray them as handmaidens to the lord and master having been discarded to make the story better). Call it an exaggeration with a point, if you will.

SIGHTINGS:   The 2000 Larry Elder book, 10 Things You Can't Say in America, reproduces the text of the example, with "How to be a good wife, a home economics high school textbook, 1954" offered as its source.