Viral web sites massively exaggerate the risk posed by these plants, even if that risk is rooted in a modicum of reality. 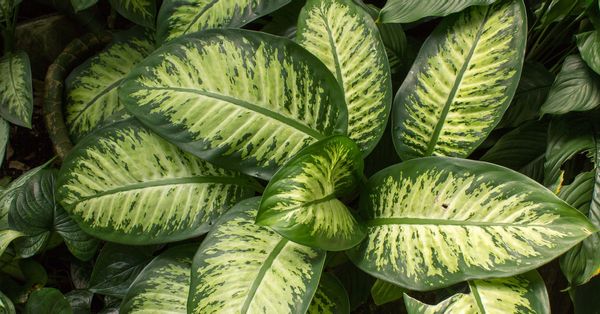 Claim:
The household plant Dieffenbachia, one of the most common indoor plants, is so poisonous it can kill a child in one minute and an adult in 15 minutes.
Rating:

Viral claims regarding the purported dangers of common household plants belonging to the genus Dieffenbachia (shown above) have been on the internet for years. One article (titled, colorfully, "My Son Died for This Damn Plant it Is Urgent That Everyone Knows, Kills a Child in 1 Minute and an Adult in 15!!") appears identically across multiple websites and provides the following representative claim:

Please read this carefully. My son died because he put a piece of leaf in his mouth and tongue and these swelled to suffocate. This plant is very common in many homes and offices. It is deadly poisonous and dangerous, to the point of killing a child in 1 minute and an adult in 15 minutes. If you touch it by chance you should never bring your fingers to your eyes, as this could cause permanent blindness. Warn your friends and family.

This post does not seek to debunk that specific story, in part because it comes with no details that allow any aspect of it to be verified. Instead, this post addresses more broadly the risk posed to humans by this widespread potted plant.

Dieffenbachia is indeed very common among household plants (it's simple, and requires little sunlight), and eating its leaves or rubbing your eyes with your hands after coming into contact with the plant may indeed cause irritation, which in turn can cause the swelling described above. As far as the plant causing death, however, Ed Krenzelok, an emeritus professor of pharmacology at the University of Pittsburgh Medical Center and a former director of the Pittsburgh Poison Center who has researched Dieffenbachia toxicity specifically, is skeptical:

I've never ever seen a fatality in my experience related to Dieffenbachia or any of the members of the Arum family. I've reviewed, virtually [...] hundreds of thousands of cases in my career involving plants of this nature.

The risk of irritation from Dieffenbachia is not news. People have been aware of its properties as an irritant since at least the first century A.D. Later, Jamaican slave traders — sadistically — rubbed the juice of these plants on the tongues of slaves, causing their mouths to become painfully swollen, as a form of punishment, making one of its common names "dumb cane".

The cause of this irritation comes from a chemical called calcium oxalate, which exists in varying concentrations across the entire plant kingdom, including a variety of food crops. In Dieffenbachia and some other groups of plants, this chemical forms microscopic (but razor-sharp) crystals called raphides that can rip apart and irritate tissues in your mouth or your eyes, as described by Krenzelok:

Think of a micro-miniature balloon filled with crystal in the cells of the dieffenbachia and when you bite down on that, you squeeze the cells and the enzymes that are in there and the oxalate crystal are expelled. [...] If you just touch a dieffenbachia or rub it on your arm or whatever, without breaking the integrity of the leaf, you're not going to have a problem.

Calcium oxalate is a ubiquitous chemical in nature. It is produced as a byproduct of a variety of cellular processes, and can form many different types of chemical structures depending on the species of plant. Not limited to plants, it is also produced as a byproduct in mammalian metabolism as well, and it is one of the most common minerals that form kidney stones.

The risk to humans — at least, when speaking about the reactions described in these viral posts — would come not from the inherent toxicity of calcium oxalate, but from physical abrasion caused by these tiny sharp crystals, as explained by the Children's Hospital of Philadelphia:

Oxalate crystals can cause intense pain and swelling if they come in contact with the skin or mouth. When any part of these plants is chewed and swallowed, the crystals stab the sensitive tissues of the tongue, gums and throat, creating the sensation of biting into ground glass. Pain, difficulty swallowing, swelling and temporary hoarseness may occur.

Poisoning from swallowing an oxalate-containing plant is rare because the intense mouth pain usually prevents children from eating a significant quantity of the plant.

In terms of contact with the eyes, Krenzelok says he frequently saw eye irritation at his center, but never traumatic, permanent eye damage:

I've seen a lot of cases where ocular exposure has occurred, but generally because people have a broken stem or something and they get some of the juice on their fingers and they happen to rub their eye and they have a little irritation.

But I've never ever seen or observed a traumatic ocular exposure either. [In my experience], I've never seen loss of vision or anything of that nature.

Krenzelok told us it was not uncommon at his center to see patients, most commonly children, for exposure to Dieffenbachia. In fact, it is the second most common plant exposure treated in American poison control centers, and a majority of those cases involve children. Krenzelok said the Center typically treated these cases by providing the child milk or water  ("It didn't matter. Basically, just to take the irritation away," he explained) and by offering assurances to the parents that there would be no long term problems once the pain subsided.