Did a Man Accidentally Burn His Home Down After Lighting Nike Shoes on Fire?

Junk news sites cashed in on the supposed craze for burning Nike apparel as a protest over the company's ties with Colin Kaepernick. 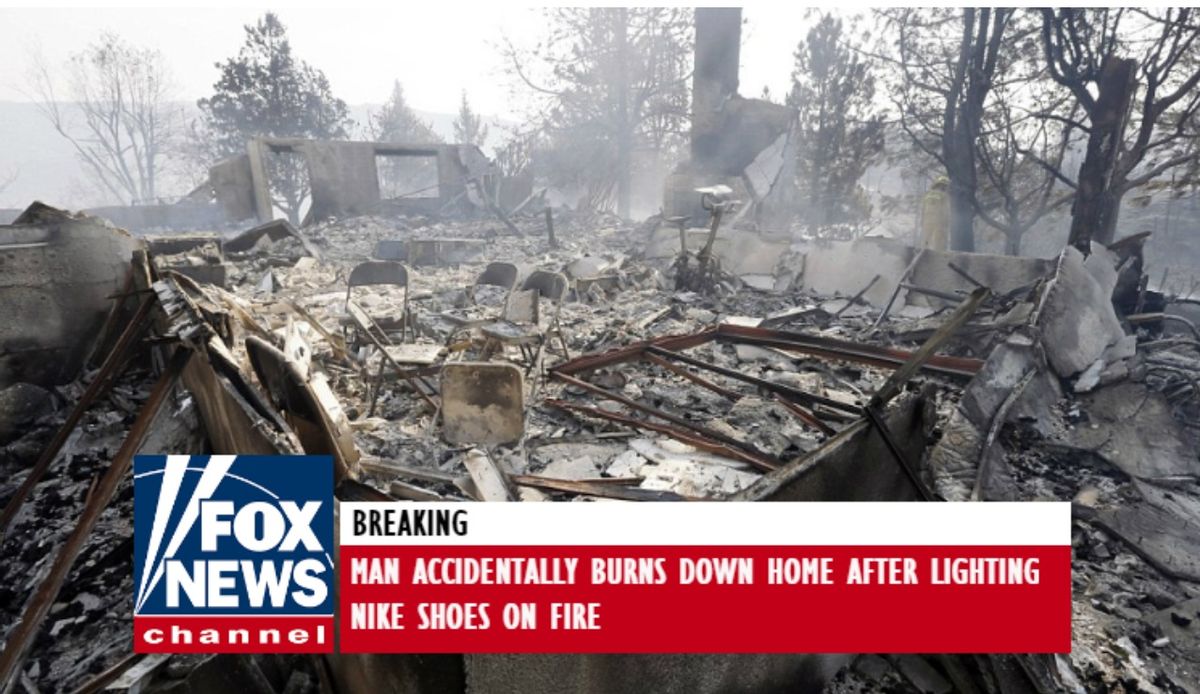 Claim:
A man accidentally burned down his home while attempting to set his Nike shoes on fire in protest over the company's ties with Colin Kaepernick.
Rating:

Among the many bits of junk news that circulated online in the wake of Nike's September 2018 announcement that controversial free agent quarterback Colin Kaepernick would be part of the company's 'Just Do It' 30th anniversary ad campaign were items that played on the idea of disgruntled consumers' burning their Nike-branded shoes and other apparel. One jokester, for example, created a widely circulated Facebook post that made it appear he had suffered severe foot burns by setting his Nike shoes afire while he was wearing them.

In a similar vein, the Huzlers website published an article positing that a Florida man had accidentally burned his home trying to burn a pair of Nike sneakers as a protest over the company's inclusion of Colin Kaepernick in their ad campaign:

According to authorities, Jason Helms, 26, placed a pair of Nike sneakers in his garage and soaked them in Kerosene before lighting them on fire. The fire ended up spreading to the the garage walls and ceiling before spreading to his actual home. All in protest against Nike, who recently made an Ad featuring controversial NFL star Colin Kaepernick and reading: “Believe in something, even if it means sacrificing everything… Just do it”. “Don’t burn your Nike gear” says police officer Don Greestien, “just send them over to me”.

The very same story was also published on other sites, but with the setting changed from Florida to Rochester and Bartlesville, but all of these reports were false, just mere fabrications.

Huzlers is a junk news site that describes itself as "the most infamous fauxtire & satire entertainment website in the world," and the other geographic variants of the story were published on fake news sites that imitate the appearance and domains of real news organizations such as the Fox News Channel and USA Today.