Democratic members of the House of Representatives took an official trip to Italy and Africa while Congress was out of session. 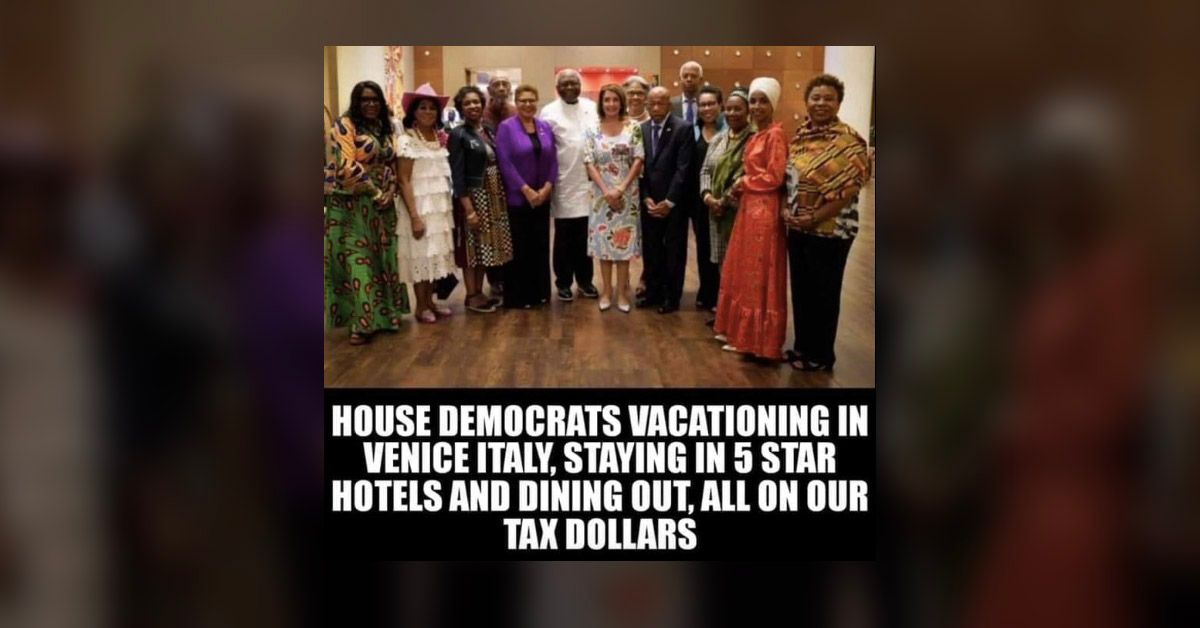 Claim:
A photograph shows Democratic members of the U.S. House of Representatives vacationing in Italy.
Rating:

In late July 2019, multiple misreports about the a Democratic delegation to Italy and Ghana were spread online. One of those versions involved a false claim that U.S. Rep. Elijah Cummings, D-Md., was on the trip (he wasn't). Yet another false claim stated that a photograph taken in Ghana of U.S. House Speaker Nancy Pelosi and other Democratic lawmakers depicted their "vacation" in Italy: The above meme was misleading on two fronts. For starters, the picture wasn't taken in Venice, Italy, but rather in the West African country of Ghana, where House Speaker Nancy Pelosi and 13 members of Congress marked the 400-year anniversary of the first slave ships' arrival in the U.S.

The image originated on Pelosi's official Twitter feed, where she posted it while sending greetings to Cummings back in the U.S.:

To @RepCummings with love from Ghana, where we’re solemnly observing 400 yrs since the first enslaved Africans arrived in America. Thank you Elijah for fearlessly speaking truth. pic.twitter.com/tEz266LI3U

The meme was also misleading because Pelosi and her fellow congressional leaders were not on vacation, but on an official work trip undertaken while the House of Representatives was out of session.

Accompanied by members of the Congressional Black Caucus, Pelosi's delegation first traveled to Italy, where they visited the U.S. Army Africa headquarters, then on to Ghana, where they met with the Ghanian president and other members of government and visited the "Door of No Return," a memorial to the Atlantic slave trade, according to Pelosi's office.

U.S. Rep. Ilhan Omar, D-Minn., posted a picture to her official Twitter feed showing Pelosi visiting the memorial with her:

They said “send her back” but Speaker @SpeakerPelosi didn’t just make arrangements to send me back, she went back with me ✊?

So grateful for the honor to return to Mother Africa with the @TheBlackCaucus and commemorate The Year of Return! #Doorofreturn #Ghana pic.twitter.com/0yVBLcAEs5

"Send her back" was a reference to a rally chant about Omar at one of U.S. President Donald Trump's political events. It was inspired by comments made by Trump calling on four women of color in Congress, including Omar, to "go back" where they came from -- although all of them are American citizens, and all but Omar were born in the U.S.

We asked Pelosi's office how much the trip cost taxpayers but had received no response as of the time of publication.

Because the depicted travel was undertaken as part of an official government trip and not a "vacation," and because the photograph displayed above was falsely characterized as depicting Italy when in fact it was taken in Ghana, we rate this item "miscaptioned."