Did Homer Simpson Say He Could Buy a House Because of His Union Job?

Homer truly does have a union job, but does he really understand what that means? 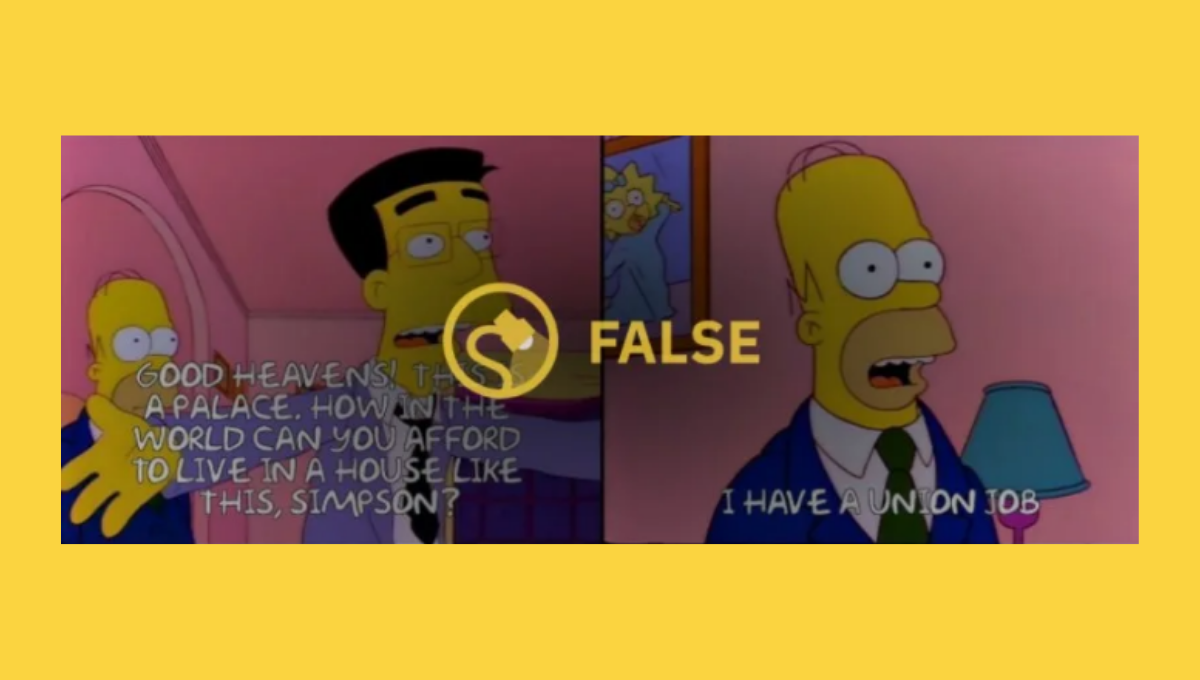 Claim:
Homer Simpson tells Frank Grimes that he is able to afford a nice house because he has a "union job."
Rating:

While Homer Simpson is a member (and at one time was president) of the Springfield Nuclear Power Plant trade union, the "I have a union job" quote circulating on a meme does not appear in an episode of "The Simpsons."

In April 2021, a set of images circulated on social media that supposedly showed a scene from the animated TV show "The Simpsons" in which Homer Simpson tells a new coworker named Frank Grimes that he is able to afford a family and a nice house because of his "union job."

These images come from an episode entitled "Homer's Enemy" (season 8, episode 23) that introduces a hardworking character named "Frank Grimes" to the town of Springfield. Grimes loathes Simpson because Grimes feels that he works hard every day and achieves little, while Homer coasts through life but is very successful.

Homer invites Grimes over for dinner in the hopes of smoothing things over, but when Grimes comes over he is perplexed over how Homer can afford his "palace" of a home. While the screenshot above shows Homer answering this question by saying "I have a union job," in the actual episode Homer responds: "I don't know. Don't ask me how the economy works."

This moment can be glimpsed around the 30-second mark of the following clip:

While Homer does not brag about his union membership in this scene, he truly is a member of a union. In fact, in the episode "Last Exit to Springfield" (season 4, episode 17) he became the union president and was tasked with leading the workers on strike to restore their dental plan.

Homer, thanks in part to his union job, may have been able to afford his Springfield "palace" when these episodes first aired in the 1990s, but according to a report from The Atlantic, the Simpsons would not be nearly as financially secure if the show was set in modern times:

Adjusted for inflation, Homer’s 1996 income of $25,000 would be roughly $42,000 today, about 60 percent of the 2019 median U.S. income. But salary aside, the world for someone like Homer Simpson is far less secure. Union membership, which protects wages and benefits for millions of workers in positions like Homer’s, dropped from 14.5 percent in 1996 to 10.3 percent today. With that decline came the loss of income security and many guaranteed benefits, including health insurance and pension plans. In 1993’s episode “Last Exit to Springfield,” Lisa needs braces at the same time that Homer’s dental plan evaporates. Unable to afford Lisa’s orthodontia without that insurance, Homer leads a strike. Mr. Burns, the boss, eventually capitulates to the union’s demand for dental coverage, resulting in shiny new braces for Lisa and one fewer financial headache for her parents. What would Homer have done today without the support of his union?

The purchasing power of Homer’s paycheck, moreover, has shrunk dramatically. The median house costs 2.4 times what it did in the mid-’90s. Health-care expenses for one person are three times what they were 25 years ago. The median tuition for a four-year college is 1.8 times what it was then. In today’s world, Marge would have to get a job too. But even then, they would struggle. Inflation and stagnant wages have led to a rise in two-income households, but to an erosion of economic stability for the people who occupy them.