Circulating images purport to compare the effects of urban decay in Detroit with the destruction of Hiroshima, Japan by an atomic bomb during World War II. 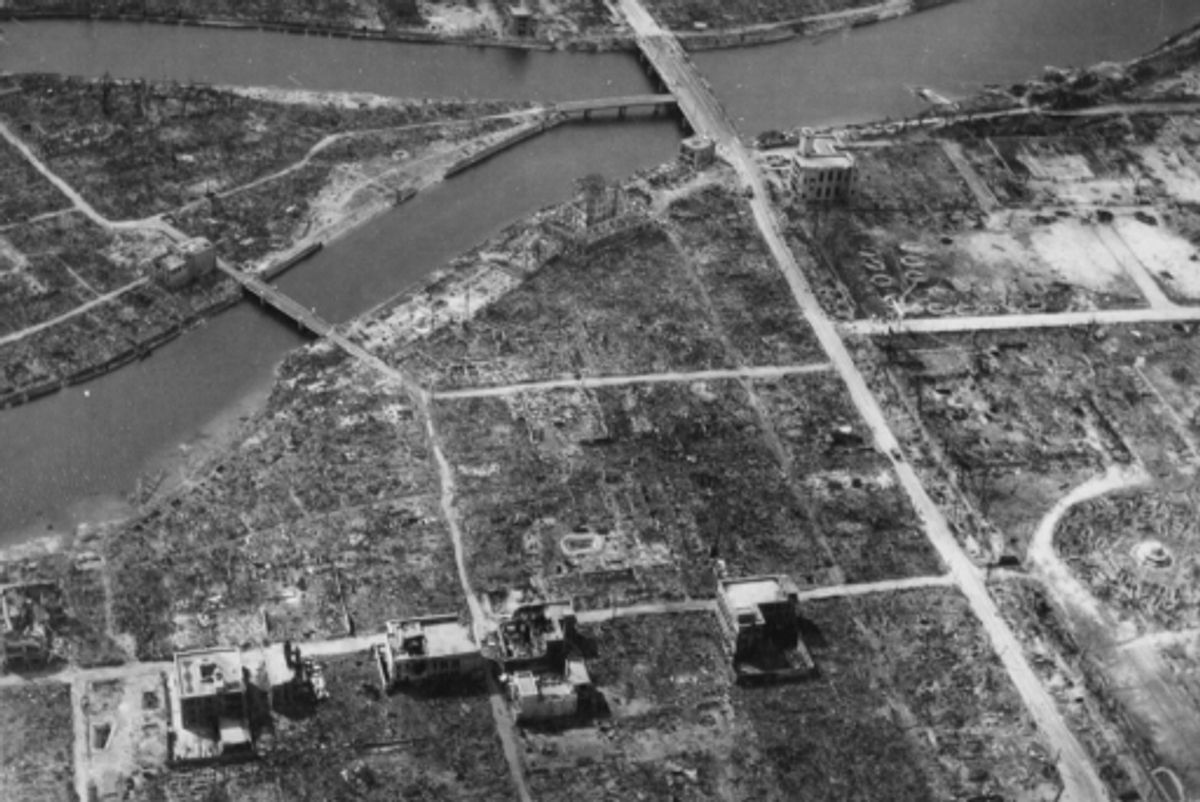 Claim:
A set of photos draws a realistic comparison between the rebuilt city of Hiroshima 65 years after it was destroyed by an atomic bomb and the present-day urban decay of Detroit after 65 years of governance by the Democratic Party.
Rating:

The photo montage displayed above is one of dozens circulating online since 2009, purporting to demonstrate that 50-plus years of rule by the Democratic Party wrought a level of destruction on Detroit comparable to that caused by the dropping of the atomic bomb on Hiroshima, Japan in 1945.

Some versions have sought to make the case verbally, as well. For example:


What has caused more long term destruction - the A-bomb, or Government welfare programs created to buy the votes of those who want someone to take care of them?

Japan does not have a welfare system. Work for it or do without.

These are possibly the 5 best sentences you’ll ever read and all applicable to this experiment:

1. You cannot legislate the poor into prosperity by legislating the wealthy out of prosperity.

2. What one person receives without working for, another person must work for without receiving.

3. The government cannot give to anybody anything that the government does not first take from somebody else.

4. You cannot multiply wealth by dividing it!

The comparison of 2010 Detroit to 1945 Hiroshima is grotesquely forced, however, as is the implication that Democratic policies are wholly to blame for the Detroit's decline since World War II. We'll start our analysis with the images, some of which are inaccurately labeled.

Beginning with the upper left-hand photo, it is, in fact, an aerial view of the hypocenter (ground zero) of the atomic bomb explosion over Hiroshima on 6 August 1945, taken a few months after the fact. Here's a larger view of the image:

Working clockwise, the next image in the set supposedly depicts modern-day Hiroshima — except that it doesn't. It's actually a snapshot taken from the Landmark Tower Sky Garden in Yokohama, Japan much like this one from Flickr: That having been pointed out, it's true that Hiroshima was rebuilt from its ashes and is now a beautiful and modern city. Nor is it too terribly hard to find an actual photo of it.

The photo at bottom-right — though taken in 2013, not 2010 — does show a dilapidated building (of which there are plenty) on the east side of Detroit. It's the former Packard Automotive Plant, which closed in the late 1950s:

However, the thing to note about the use of this image to portray Detroit as a locus of Hiroshima-like devastation is that all we actually see is one long-abandoned, crumbling building. It doesn't make the case.

Lastly, we're shown a photo supposedly depicting Detroit in its mid-1940s heyday — except that it was taken in the mid-1930s. It's an aerial view of Navin Field (later Tiger Stadium):

Granted, for the purposes of argument it doesn't really matter whether the above photo was taken in the '30s or '40s — the point remains that Detroit once had a teeming population, abundant jobs, and a booming economy. In 1950 it was the fourth-largest city in the United States, but no longer. The question is, who was responsible?

There's no simple explanation (and therefore no single scapegoat at whom to point fingers) for Detroit's long, slow descent to bankruptcy. Scott Martelle, author of Detroit: A Biography, offered this capsule summary in an op-ed column published in 2011:

The collapse of Detroit has roots in intentional de-industrialization by the Big Three automakers, which in the 1950s began aggressively spider-webbing operations across the nation to produce cars closer to regional markets, and to reduce labor costs by investing in less labor-friendly places than union-heavy Detroit. Their flight was augmented by government policies that, in the 1970s and 1980s particularly, forced municipalities and states to compete with each other for jobs by offering corporate tax breaks and other inducements to keep or draw business investments, a bit of whipsawing that helped companies profit at the expense of communities.

Another summary of Detroit's decline cited issues such as the city's dependence on a single industry (i.e., automobiles), decades of racial tensions, shortcomings of leadership (stretching back to the 1930s), and the lack of an efficient transit system.

Did Democrats and Democratic policies play some role in the fall of Detroit? Surely they did. Every Detroit mayor since 1962 has been a Democrat, after all. But Republicans held the seat for the 12 years prior to that, from 1950 through 1961. The Packard plant whose hollowed-out remains were displayed above closed its doors during that time.

Whatever blame is to be allotted to politicians must be shared by both Democrats and Republicans on the national level, as well. Detroit's decline since World War II took place during periods when both parties held the presidency and/or controlled Congress.

Finally, the specific suggestion that Detroit's downfall was an unintended consequence of the spread of social welfare programs while Hiroshima's dramatic recovery is at least partially attributable to the lack of same in Japan is based on misinformation. Japan has maintained strong public health care and social welfare programs in one form or another since the 1920s. Yet Hiroshima was rebuilt and flourished just the same.