Rumors that Hillary Clinton staged a photo op encounter with a hiker the day after the election were just conjecture. 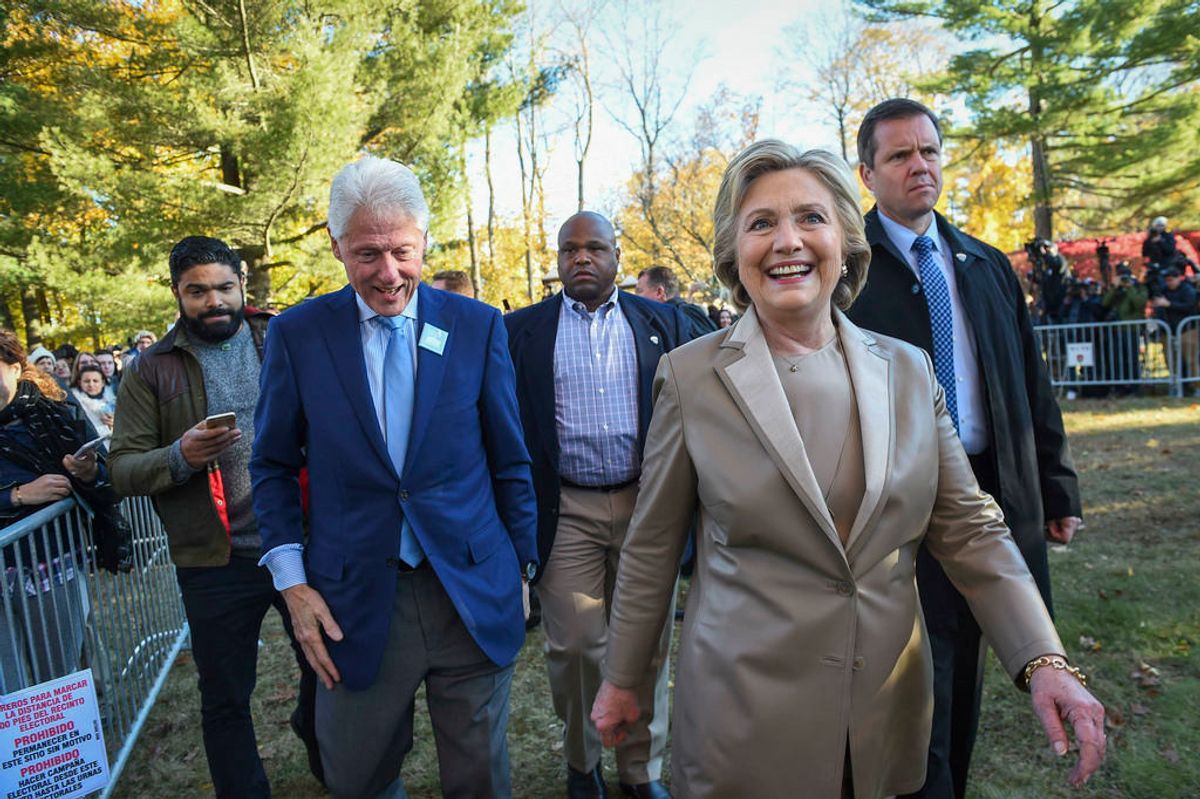 Claim:
Hillary Clinton staged a photo op encounter with a hiker the day after she lost the 2016 presidential election.
Rating:

On 9 November 2016, Facebook user Margot Gerster published a photograph of herself and Hillary Clinton on a hiking trail, along with a touching story about having randomly encountered the defeated Democratic presidential nominee the day after the election.: I've been feeling so heartbroken since yesterday's election and decided what better way to relax than take my girls hiking. So I decided to take them to one of favorite places in Chappaqua. We were the only ones there and it was so beautiful and relaxing. As we were leaving, I heard a bit of rustling coming towards me and as I stepped into the clearing there she was, Hillary Clinton and Bill with their dogs doing exactly the same thing as I was. I got to hug her and talk to her and tell her that one of my most proudest moments as a mother was taking Phoebe with me to vote for her. She hugged me and thanked me and we exchanged some sweet pleasentries and then I let them continue their walk. Now, I'm not one for signs but I think I'll definitely take this one. So Proud. #Iamstillwithher #lovetrumpshate #keepfighting #lightfollowsdarkness

Shortly after Gerster posted her account on Facebook, web sites such as "Fellowships of the Mind" published articles claiming that the incident had been staged. These articles lacked the evidence required to back up such a claim, relying solely on a single photograph that had been taken years earlier:

The only problem with the story is this:

Here’s another picture that Gerster posted to her Facebook page on November 8 — of herself (right) with Hillary (left) and Margot’s sister, Alexandra (middle). (I painted the yellow arrow and the red bracket.) However, the above-displayed photograph does not prove that Gerster "knows Hillary very well." Instead, it proves that she had once met Clinton at a fundraiser several years earlier while she was in high school, an incident that shouldn't be too surprising given Gerster's support for the Democratic politician.  (It's tough to read, but Gerster's comment says: "Back in high school ... at a fundraiser my mom hosted at the Kittle House. She was the guest of honor.")

No evidence was offered showing that Clinton and Gerster had been in touch between the fundraiser dinner years earlier and their chance encounter on a hiking trail in November 2016.

On 12 November 2016, Gerster denied that the photograph had been staged to the New York Post:

“It was so long ago, I do not remember. All I knew was that I was going to a nice dinner and Hillary Clinton was there,” she said.

The mom dismissed accusations she’s a long-time ally of the Clintons who secretly planned and engineered the heart-warming, post-election snap.

“If I were long-time friends of the Clintons, I wouldn’t be keeping that a secret. I’d be bragging about it to everyone I know,” Gerster said.

The photograph showing Hillary Clinton with a hiker the day after the 2016 presidential election is real. While it's true that Margot Gerster had once previously met Clinton while Gerster was in high school, this is not evidence that they had an ongoing relationship, that she's a secret operative, or that the photograph on the hiking trail was staged.