Rumor claims Hillary Clinton once disparaged nurses by calling them overpaid 'maids' or 'babysitters,' but we found no evidence she ever said any such thing. 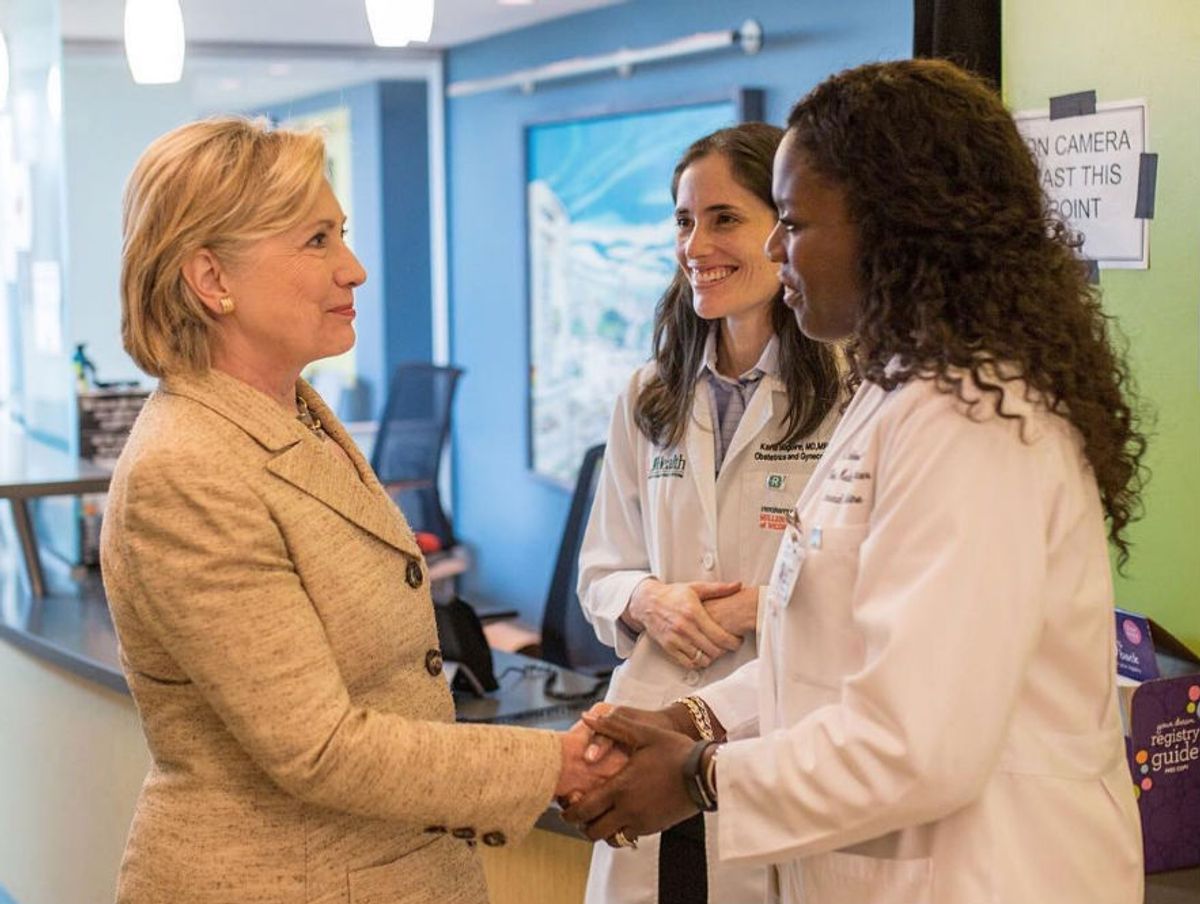 Claim:
Hillary Clinton disparaged nurses in the 1990s, remarking that they were just overpaid 'maids' or 'babysitters.'
Rating:

A persistent rumor that has been attached to Hillary Clinton for many years now, holding that sometime in the 1990s she made a disparaging remark about nurses. Although this rumor has been circulating for at least a decade now, concrete information about what she actually said, when she said it, or how the public was made aware of the comment has still not come to light.

The rumor generally asserts that at sometime indefinite place and time, Hillary Clinton allegedly referred to nurses as "glorified baby sitters" or ""under-educated, overpaid maids." For example, on 6 February 2008 a user posted a message to the AllNurses forum inquiring about the former:

OK, there are a lot of people at work saying that at some time Hillary Clinton said that nurses pay is way too high and that they are just glorified baby sitters. Has any one else heard this. I've looked at may sights on her and can't find it. If she did say that, it needs to be made known. Nurses are a large voting population. I hope for her sake she didn't say that. Is that part of her medical reform plan?

As is often the case with apocryphal broadcast legends, many users responded by asserting that they distinctly remembered Clinton's making such a remark but could offer nothing documenting the event — attributing the lack of evidence to Clinton's statement's supposedly having been made before Internet usage became widespread:

OK people, I have done my searching. (sorry it took so long, back to school) I was told by the people I went to for this information that because it was said, or rumored back in 1993, the level of information of that type was limited in cyberspace, so it will remain a rumor with no substantiated documentation

When a similar rumor was mentioned in the same forum in July 2016, this time holding that Clinton had called nurses "overpaid" and "nothing but doctor's handmaidens," users again explained away the lack of evidence by asserting that this statement was made before "everything [was] documented online":

Some of us are old enough to remember what many in the media choose to forget. (Believe it or not, not everything is documented online). Shortly after Bill Clinton was elected President, Hillary did indeed say that nurses were overpaid and were nothing but doctor's handmaidens.

Although evidence is lacking, there's no shortage of accusations. In 2007, Clinton was accused of having said that "nurses are overpaid and undereducated," and in August 2016 the image displayed above, holding that Clinton once called nurses "overpaid maids" was circulated on social media.

The fact is, so many people could not legitimately have "seen" or "heard" Clinton make such a remark, as claimed, unless it was covered by the news media at the time — and yet no one has turned up any news source, print or broadcast, documenting that she ever said any such thing. That the event might have occurred before the days of widespread Internet usage is not sufficient to explain away the lack of proof — Bill Clinton's infamous "$200 haircut" occurred at about the same time as his wife's alleged remark did (1993), yet there is ample contemporaneous documentation of the former to be found both online and in archival sources.

So how did this rumor get its start?

Hillary Clinton was an advocate for health care reform during her time as First Lady, and in 1993 she chaired the Task Force on National Health Care Reform. According to the Hillary Clinton Quarterly, she delivered her first speech on the subject on 18 June 1993 to a panel of governors in Woodstock, Vermont.

What follows are a few quotes from this speech which may have been misremembered, misinterpreted, exaggerated, or spun into any of the aforementioned accusations:

We can no longer write a blank check for health care in this country. We will have to ask everyone — workers, employers, doctors, nurses, other health care providers, hospitals — to do their part.

[W]e are proposing a wholesale reduction in the frustrating and wasteful paperwork that eats up the health care system. When you look as Ira [Magaziner] and I have at the volumes of regulations that have been put into effect over the years, the stacks and stacks of forms, you ask yourself where did all this bureaucracy come from? The short answer is that it came from everywhere. It comes from private insurers. It comes from the government. Forms were created to make sure forms were filled out properly. It makes it impossible often for the most vulnerable people to get the care that they need. It also has undercut the delivery of care because as the number of health insurance companies grew — today there are more than 1,500 — so did the number of forms. The result is that instead of a system in which patient care and doctor decision-making and nurse caring drive the system, paperwork does.

Most nurses now spend nearly half of their time filling out forms. Most physicians now spend an extraordinary percentage of their income contributing to the bookkeeping and accounting necessary to fill out forms. Patients don’t know how to read these bills. They don’t understand these forms. Those of us who’ve gone to school longer than we like to admit can’t understand these forms. And yet we are continuing to be deluged by them because that is the excuse for not getting to the heart of the problem. We now need to make it clear that what is going to count is quality outcomes, not paperwork processing. If we do that, then consumers will see a health care system made understandable and easy — one insurance form for everybody, a report card for quality that is understandable so that choices can be made, no hidden fine print. Doctors and nurses will finally be able to do what they were trained and educated to do — keeping people healthy, not filling out forms.

Parts of that speech could have been twisted into a political attack accusing Clinton of saying that nurses were "overpaid" and "babysitters," even though the context of her speech makes it clear that she was talking about a broken health care system and not accusing nurses of being under-educated or overpaid.

The rumored accusations also don't fit the general attitude that Hillary Clinton has expressed toward nurses, nor nurses towards her. In 2008, Clinton praised nurses as she "walked a day" in one of their shoes:

The American Nurses Association (ANA) has also endorsed Hillary Clinton, both during both her presidential campaign in 2008 and again in 2016:

The American Nurses Association (ANA) today announced its endorsement of Hillary Clinton for President of the United States. ANA represents the interests of the nation’s 3.4 million registered nurses and is the leading member-based organization for nurses in the United States.

"Hillary Clinton has been a nurse champion and health care advocate throughout her career and believes empowering nurses is good for patients and good for the country," said Pamela F. Cipriano, PhD, RN, NEA-BC, FAAN, president of ANA. "We need a president that will make it a priority to transform the country’s health care system into one that is high quality, affordable and accessible."

As first lady, Clinton led early efforts to reform the U.S. health care system so that Americans would have access to affordable, high quality health care services. Notably, she worked with Republicans and Democrats to help create the successful Children’s Health Insurance Program, which provides health coverage to more than 8 million children and has helped cut the uninsured rate for children in half.

We've reached out to the ANA for comment about Clinton's alleged remarks disparaging nurses, and while we have not yet heard back, the ANA did respond to a detractor on Twitter with a challenge to provide proof that Clinton made such comments. As expected, the response was one of the "I can't find it, but I know I heard it" variety:

@ANANursingWorld you'll be happy to know I cnt find it but knowing you won't take my word 4 it HRC did say it I heard it myself on the news.

Hillary Clinton has been a major political figure for nearly 25 years. While it's true that the Internet is not a comprehensive database of everything that ever occurred in the history of the world, evidence of such a controversial public remark that widely "seen" by average citizens would surely have surfaced at some point by now if it existed.