Hillary Clinton: 'Marriage Is Always Between a Man and a Woman'

An image about Hillary Clinton's stance on marriage equality reflects that she didn't publicly support same-sex marriage until 2013. 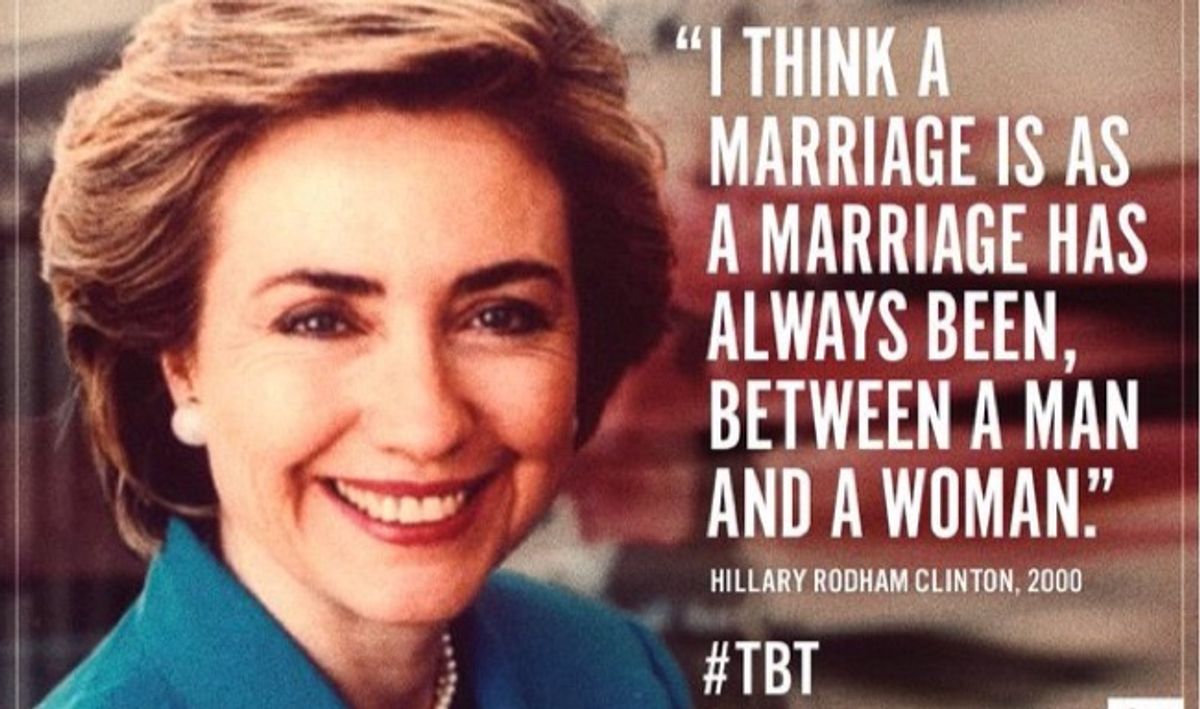 Claim:
Hillary Clinton said in 2000 that she believed marriage was "always between a man and a woman."
Rating:

As former Secretary of State Hillary Clinton edged closer to the Democratic Party's nomination in 2016, an image macro reflecting her views about same-sex marriage, as she expressed them back in 2000, spiked in popularity. Using an old photograph of Clinton and including the hashtag #tbt (typically "throwback Thursday"), the image macro quoted Clinton as saying: "I think a marriage is as a marriage has always been, between a man and a woman."

The quote was fairly easy to authenticate, given the attention now paid to Clinton's "evolved" stance on marriage equality. A 2013 USA Today article provided a longer version of the same remark:

Marriage has historic, religious and moral content that goes back to the beginning of time, and I think a marriage is as a marriage has always been, between a man and a woman.

Clinton's response to an August 2007 question had her expressing support for civil unions but still not same-sex marriage:

Well, I prefer to think of it as being very positive about civil unions. You know, it’s a personal position. How we get to full equality is the debate we’re having, and I am absolutely in favor of civil unions with full equality of benefits, rights, and privileges.

In 2011, when the state of New York legalized same-sex marriage, Clinton (then serving as secretary of state) spoke to the crowd at a gay-pride celebration and hailed the “historic vote in New York [that] gives such visibility and credibility to everything that so many of you have done over so many years.” Although she proclaimed that “I’ve always believed that we would make progress because we were on the right side of equality and justice,” Clinton remained officially on the record as opposing same-sex marriage.

Clinton's full "flop" on the issue didn't occur until March 2013, when she openly embraced marriage equality. Political science professor Paul Kengor noted at the time that Hillary Clinton had finally "endorsed gay marriage," stating that he believed she had undergone "an honest shift":

[Her position] changed this week, when the Human Rights Campaign, a gay-rights group with which Clinton has personal ties, posted a video where Clinton came out in favor of gay marriage. The timing comes as the U.S. Supreme Court readies to hear two major cases dealing with gay marriage. "LGBT Americans are our colleagues, our teachers, our soldiers, our friends, our loved ones, and they are full and equal citizens and deserve the rights of citizenship," said Clinton. "That includes gay marriage."

Alas, here we are: Hillary Clinton has endorsed gay marriage.

Some will charge that Clinton has embraced gay marriage out of political opportunism, that she sees the direction her party is moving on this issue, and therefore looking ahead to the 2016 presidential race, there's no way she would oppose gay marriage.

Perhaps there may be some truth some of the claims, but I interpret her position as steadily evolving on this issue. It's an honest shift, one that thrills liberals.

The mechanics of Clinton's evolving position on the issue came up during a 2014 NPR segment between Clinton and host Terry Gross which was widely described as adversarial or tense, in which Clinton strongly denied she had masked a long-held pro-same-sex marriage viewpoint for political purposes:

As Gross pressed Clinton to reveal whether it was her personal viewpoint or merely her political stance that had changed, Clinton side-stepped the question:

GROSS: “I’m pretty sure you didn’t answer my question about whether you evolved or it was the American public that changed ...”

CLINTON: “Because I said I’m an American so of course we all evolved and I think that’s a fair conclusion ...”

GROSS: “So that’s one for you changed your mind?”

CLINTON: You know I really, I have to say, I think you’re being very persistent, but you are playing with my words and playing with what is such an important issue.”

GROSS: “I’m just trying to clarify so I can understand ...”

Gross pressed the issue, and Clinton provided a firmer answer as to why she changed her position in 2013:

GROSS: “You know I’m just saying, I’m sorry — I just want to clarify what I was saying — no, I was saying that you maybe really believed this all along, but, you know believed in gay marriage all along, but felt for political reasons America wasn’t ready yet and you couldn’t say it. That’s what I was thinking.”