Was Hillary Clinton Bribed for Her Iraq War Vote?

During a March 2016 MSNBC Town Hall appearance, Hillary Clinton discussed her Iraq War vote, but she didn't suggest her vote was part of a political bribe. 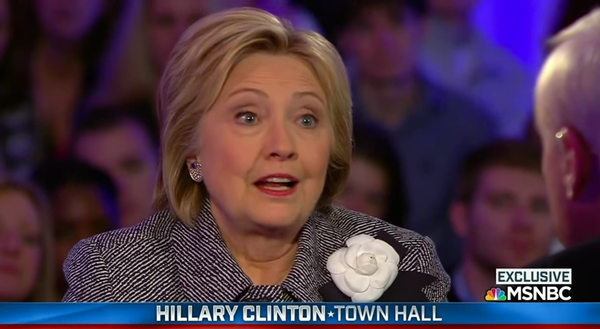 Claim:
Hillary Clinton admitted her Iraq War vote was elicited in exchange for money provided by the Bush administration to help rebuild New York City after the 9/11 attacks.
Rating:

On 15 March 2016, the web site US Uncut published an article suggesting that Hillary Clinton had admitted during a live television interview that her vote in favor of the Iraq War (made while she was a U.S. senator representing New York) was part of a "bribe":

During tonight's Democratic town hall on MSNBC, Hillary Clinton shockingly defended her vote for the Iraq War as a favor for President Bush helping New York after 9/11. Around the 4-minute mark of the video below, Clinton admitted that she had "a different set of experiences" with George W. Bush than Sanders did, in response to Chris Matthews asking her why she was wrong on Iraq War while Sanders was right.

"I'm sitting there in the Oval Office, and Bush says to me, 'What do you need?' And I said, 'I need $20 billion to rebuild, you know, New York,' and he said, 'You got it.' And he was good to his word," Clinton said in response to Matthews' question on why Bernie Sanders was right on the Iraq War vote and Clinton was wrong.

"Literally, that same day, I get back to the Capitol, and the Republicans are trying to take that money away. We kept calling the White House, Bush kept saying, 'I gave them my word, I'm going to stick with it.' So, you know, I had a different set of experiences."

No portion of the quoted text involved Hillary Clinton expressing an explicit quid pro quo admission regarding her Iraq War vote. The context of her remarks involved her having just flown over Ground Zero (while air travel was largely still restricted) and witnessing the devastation wrought on New York City by the 9/11 terrorist attacks. Although Clinton confusingly veered off the topic in explaining why she voted to authorize the war in Iraq, she didn't appear to be describing any sort of mutual back-scratching agreement with President Bush.

The exchange in question occurred between Clinton and MSNBC anchor Chris Matthews beginning at roughly the 4-minute mark in the clip shown below:

What Hillary Clinton seemed to be saying here was a reiteration of a similar discussion summarized in a February 2016 Slate article — that she believed President Bush when he said he was using the threat of war with Iraq to push for a diplomatic solution (i.e., to force Saddam Hussein into readmitting U.N. weapons inspectors to Iraq), that she took Bush at his word on that issue because she had seen him come through with a promised $20 billion in aid to New York that she had asked for (over Republican opposition), and that her personal experience with seeing President Bush follow through on what he promised was one that Bernie Sanders (who voted against the war) did not share. But, ultimately, her vote proved wrong because President Bush went back on his word that he would allow time for the diplomatic approach to play out:

In response [to debate about the Iraq vote], Clinton acknowledged, as she has on previous occasions, that she'd made a mistake. But she also offered an explanation for her vote, something she has rarely done in the past. President Bush, she told the audience, had made a "very explicit appeal" that "getting this vote would be a strong piece of leverage in order to finish the inspections." In other words, a resolution to use force would prod Saddam Hussein into readmitting U.N. inspectors, so they could continue their mission of verifying whether or not he had destroyed his chemical, biological, and nuclear weapons sites. In other words, Clinton was now claiming she voted the way she did in the interests of diplomacy; the problem was that Bush went back on his word — he invaded before giving the inspectors enough time.

The evidence is clear. On Oct. 10, 2002, during the Senate debate on a resolution to authorize the use of force in Iraq, Clinton rose to express her highly qualified support. First, though, she criticized the idea of attacking Saddam then and there, either alone or "with any allies we can muster." Such a course, she said, "is fraught with danger," in part because "it would set a precedent that could come back to haunt us ... This is a difficult vote. This is probably the hardest decision I have ever had to make. Any vote that may lead to war should be hard, but I cast it with conviction ... My vote is not, however, a vote for any new doctrine of preemption or for unilateralism or for the arrogance of American power or purpose." A vote for the resolution, she argued, "is not a vote to rush to war; it is a vote that puts awesome responsibility in the hands of our president. And we say to him: Use these powers wisely and as a last resort."

Clinton's anecdote about meeting with George W. Bush to secure aid for New York was part of a complicated (and arguably self-serving) justification for her Iraq War vote that was likely confusing to many viewers who weren't previously familiar with the full background context of her remarks, but it's quite a stretch to interpret her words to mean her supporting vote was due to a political trade-off (i.e., a "bribe") rather than an error in judgment.