A one-second segment of an October 2015 video tweeted by Hillary Clinton was screencapped to suggest the candidate had donned a hijab for a new campaign ad. 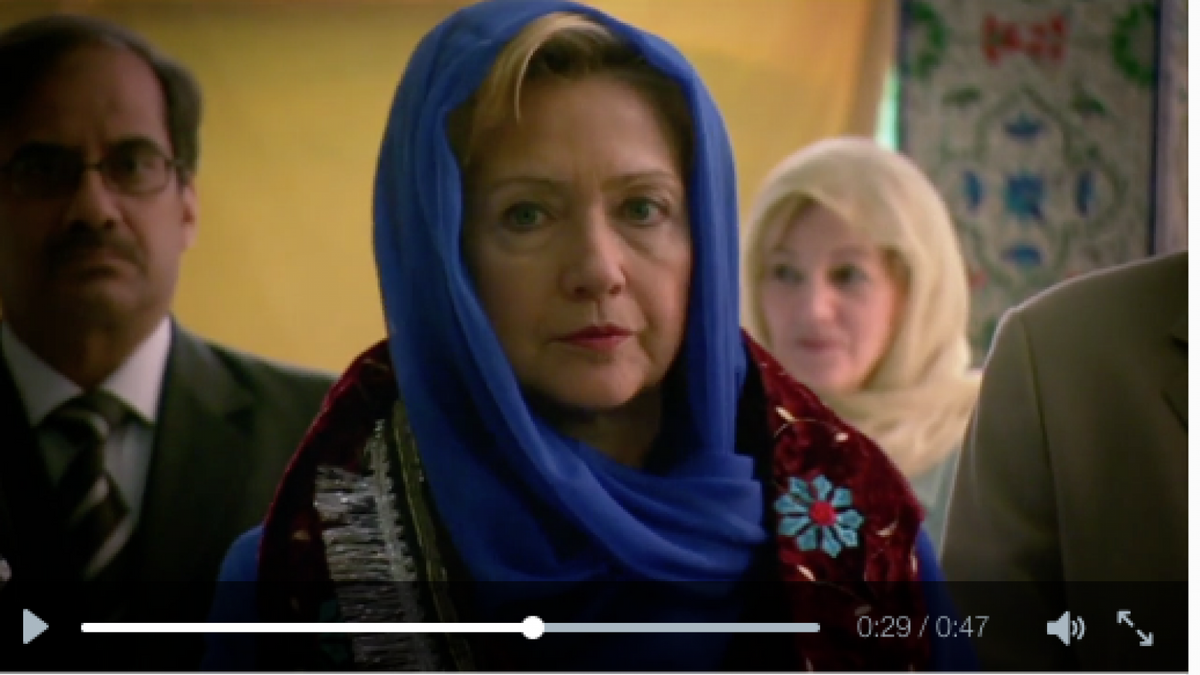 Hillary’s latest campaign video tries to build up her non-existent foreign policy experience. That means making as much as possible out of her feminist speech in China ... which avoided criticizing a Communist regime that forces women to have abortions. (Or as her Planned Parenthood pals call it, health care outreach.) And showing her travel photo slideshow.

But in odd contrast to touting Hillary’s feminism and strength, is this shot of her wearing a Hijab; an Islamic garment of submission.

However, Departed did not display or link to the campaign ad in question. And the very same claim was made back in October 2015, so clearly the referenced image didn't stem from a campaign ad that was "new" in June 2016.

In fact, the image of Hillary Clinton in a headscarf was a screen capture taken from a montage of very brief segments showing Hillary meeting with various foreign dignitaries in her role as secretary of state, compiled for a promotional campaign video that the Clinton campaign tweeted on 19 October 2015:

"I don't think I have ever met someone more prepared to be president." —@Madeleine Albrighthttps://t.co/D6nCGEDC6v

The blink-and-you'll-miss-it screenshot occurred at the 0:27-0:28 mark of the video and was widely shared out of context to suggest that Hillary Clinton's "new campaign ad" depicted her wearing a hijab as part of her ordinary attire. But it was clear in (the universally absent) context that the footage was captured while Clinton was visiting a location in which her wearing a head covering was expected by custom.

Specifically, the image was taken from coverage of a 2009 visit to Pakistan by Secretary of State Clinton, during which she donned a head covering while visiting the shrine of the Sufi saint Shah Abdul Latif Kazmi and the Badshahi Mosque. Just as historical Catholic practice held until well into the 20th century that women should cover their heads in church, historical Islamic practice typically holds that all mosque visitors should cover their legs below the knee, and that women should cover their heads; failure to do so may be considered extremely disrespectful by practitioners of the religion. The donning of a head covering in such circumstance by a non-Muslim is a diplomatic courtesy, no more an act of "submission" to Islam than the wearing of a yarmulke by a non-Jewish person while visiting temples or attending Jewish religious ceremonies constitutes "submission" to Judaism.