A photograph of Hillary Clinton speaking at a campaign event was circulated as proof that the presidential nominee wears a defibrillator. 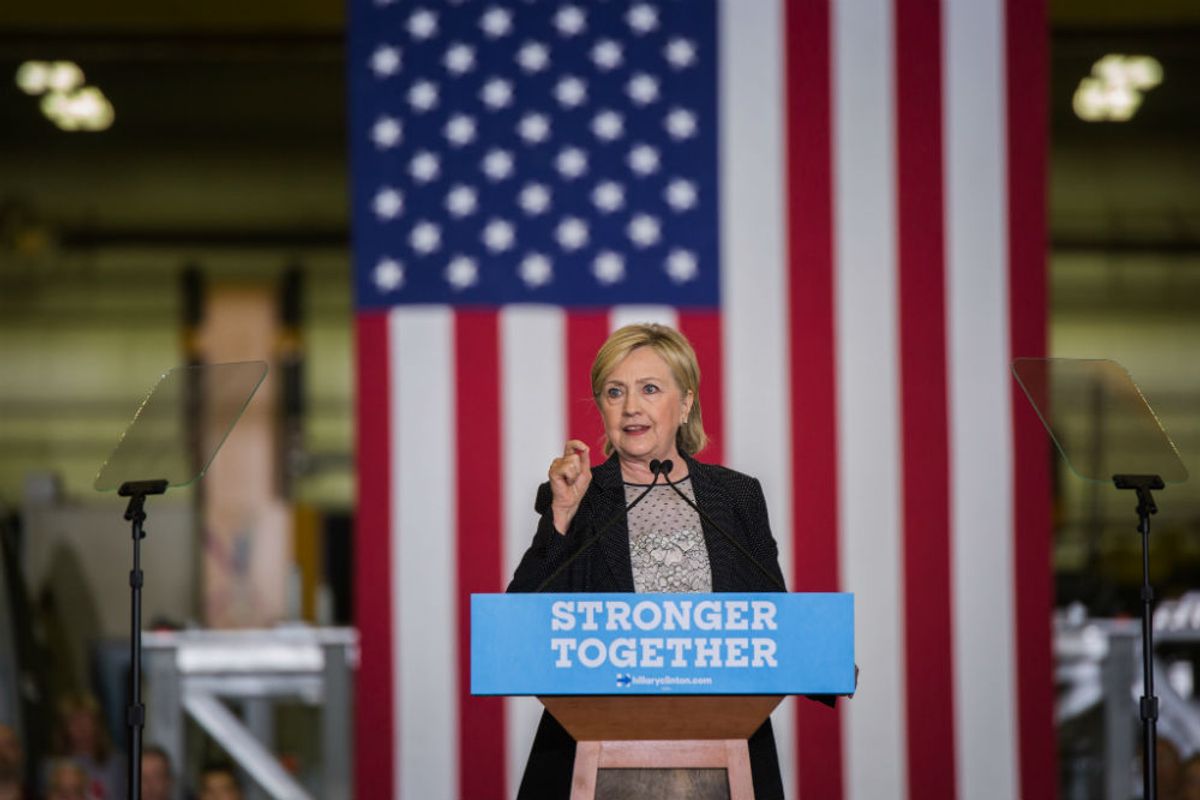 Claim:
A photograph shows Hillary Clinton wearing a defibrillator under her clothes at a campaign event.
Rating:

In August 2016, rumors that Democratic presidential nominee Hillary Clinton was in poor health started gaining traction, even though the evidence supporting these rumors (e.g., that Clinton needs help climbing stairs , that her bodyguard is a doctor in a disguise, or that medical records documenting dementia have been leaked) was flimsy or completely lacking.

The search for a smoking gun continued with the circulation on social media of an image purportedly showing Clinton wearing a defibrillator: This picture of Hillary Clinton was taken from a video shot on 24 February 2016, when the Democratic candidate was interrupted by a protester while she was speaking at a fundraiser in North Carolina. With the exception of the two added red arrows, this screen capture has not been altered.

We took a larger capture from the video in order to get a better look at Clinton's jacket. Although a boxy bulge is visible under Clinton's right shoulder, it's unclear what the arrow pointed at her right hip is supposed to indicate: So what's the explanation for that bulge at her shoulder? While "one explanation is that the object is a defibrillator," that explanation would be wrong.

The image of the wearable defibrillator provided above and the image depicting a bulge on Clinton's shoulder don't match up. The defibrillator features two rectangular bulges, yet Clinton is shown with only one "strange" object on her shoulder. The defibrillator also requires a large object to be worn near the waist, yet none is apparent in the above-displayed photographs.

What can be seen is that Clinton was using a wireless microphone during this event. These devices require the use of a wireless transmitter, which is almost certainly what is seen in the above-displayed image:

Problems arise when the reporter or interviewee has neither a belt nor a pocket. To keep the mic out of sight, it may mean secreting it down a trouser leg or inside a dress. Women sometimes have to clip the mike to a bra strap, or if their dresses are tightly cut, tape the transmitter to the inside of a thigh.

Further evidence that Clinton was wearing a microphone transmitter (and not a defibrillator) on her shoulder comes from photographs of the candidate taken at different times on the same day. If Clinton were truly wearing a defibrillator, this rectangular bulge should have been evident at different points during the day, as she would be unlikely to remove a potentially life-saving device.

Yet, photographs of the candidate wearing the same clothes on the same day show no bulge. The disappearance of the bulge can more likely be explained by the fact that the transmitter under her clothes would have been removed shortly after the candidate was done using her wireless microphone: