An Internet joke circulating since the early 2000s holds that U.S. Secret Service agents and military personnel refer to Hillary Clinton's aircraft as "Broomstick One." 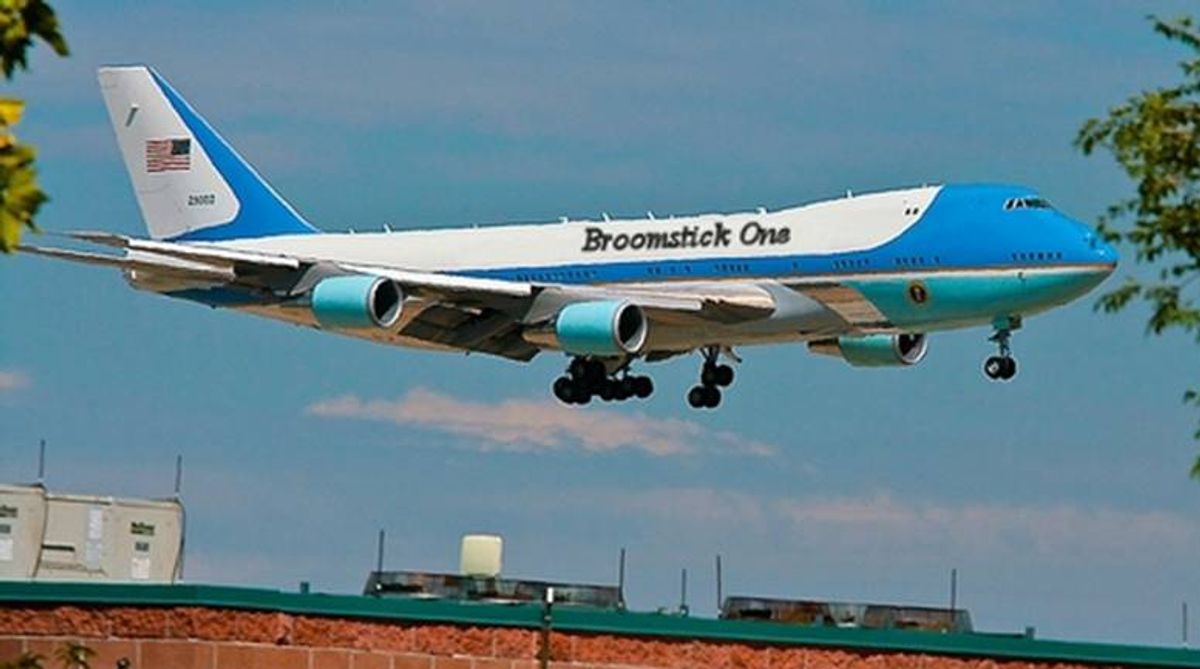 On 27 October 2016, during an otherwise typical on-air rant against Democrat Hillary Clinton, conservative radio pundit Rush Limbaugh had this to say about the presidential candidate's primary means of transportation:

Do you know what they call Hillary's campaign plane?  Broomstick One.  That's the name for her campaign plane given by Secret Service and State Department agents because of how rudely she treated them.  This is in the emails as well, in addition to forthcoming books, that she was mean and rude and had no time for people she thought were there to serve her, foul mouth and liberal use of the F-word in dealing with these people, and they named her plane Broomstick One.

Though Limbaugh didn't cite a source for that tidbit, it was quite possibly The Washington Times, which had run an editorial saying much the same thing two weeks earlier:

Hillary, by the published accounts, is an equal-opportunity offender, insulting people, dogs and cats, even the flag, going back to her late and lamented days as a governor’s wife in Arkansas. She was particularly abusive to troopers and agents assigned to make her life easier and who were in no position to do anything but take her abuse. She was so verbally abusive to the pilots of Marine One, the presidential helicopter, that the crew called the chopper “Broomstick One.” Just not in her presence.

Like the more general partisan caricature of Hillary Clinton as an evil witch, the charge that she is vulgar and verbally abusive with subordinates is longstanding (Snopes.com assessed such claims as far back as 2007). Most of the commonly cited instances, however, which allegedly took place while the Clintons resided in the White House between 1993 and 2001, have proved to be anecdotal and impossible to confirm.

The specific claim that military and/or security personnel have at one time or another designated Hillary Clinton's aircraft "Broomstick One" first surfaced in December 2003, a few weeks after Clinton (then a U.S. Senator from New York) toured military bases in Iraq and Afghanistan. This is a typical example of what circulated via forwarded e-mail:

Regardless of where you stand in the political spectrum, everyone should recognize humor as only the troops can dream it up. Did you hear what call sign the military used for Hillary's Blackhawk helicopter during her tour in Iraq?

"Broomstick One" ... and she never knew!

The above text is similar to a variant posted 18 December 2003 on the political message board Free Republic, where commenters found it simultaneously questionable and amusing:

Never accuse the American Military of not having a sense of humor !

Have you heard what the troops are calling the Sikorsky Blackhawk helicopter Hillary Clinton used on her Iraq tour?

Its veracity was rightly questioned from the start. In addition to being purely anecdotal — not a single source was cited, then or since — every telling of the story omitted a crucial detail about Sen. Clinton's four-day trip, namely that she wasn't traveling alone. According to newspaper accounts, she toured Afghanistan and Iraq in the company of fellow senator Jack Reed (D-Rhode Island). And while the fact that it was a joint mission doesn't, by itself, invalidate the notion that the troops could have came up with a special nickname for "Hillary's Black Hawk helicopter," it does cast doubt on it. In any case, the claim has never been proved.

Apart from forwarded e-mails, the story's next appearance was in a collection of Marine Corps humor, The Older We Get, the Better We Were: More Marine Corps Sea Stories and Politically Incorrect Common Sense, written by Andrew Anthony Bufalo and published in 2004:

In 2003 now-Senator Clinton visited Afghanistan, ostensibly on a "fact finding" tour. The troops who were there knew it was really a political trip designed to build her resume and get some press, and naturally they felt the whole dog and pony show was an unnecessary distraction for them. So when it came time to choose a designation for the helicopter she would be riding in someone came up with a call sign that was both accurate and poetic — Broomstick One!

"Broomstick One" made a brief Internet comeback during Clinton's 2008 presidential primary campaign against Democratic rival Barack Obama, appearing in joke posts like this one, dated 9 April 2008: Eight years later, it would become a staple of the 2016 election cycle, often accompanied by additional spurious claims such as that "Broomstick One" is Clinton's Secret Service "codename" (her actual codename is "Evergreen"), and that "Broomstick One" was referenced in one or more WikiLeaks e-mails (we've searched in vain for any such reference). Here is a sampling of what the joke looked like on Twitter, right up until a month before the election:

Looks like the Flu uhh Pneumonia is keeping @HillaryClinton from getting back in the Sa... errr Broomstick One pic.twitter.com/gyRnJFbD1h — Zeb (@PaynefulPolitic) September 14, 2016