A post claimed Navy SEALs broke into the former secretary of state's home and tranquilized her. 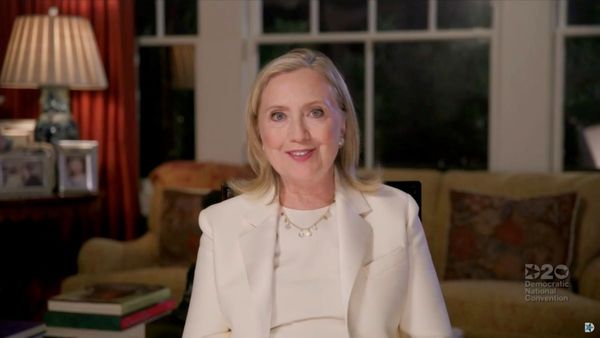 Image Via DNCC via Getty Images

Under a headline reading "Navy SEALS Arrest Hillary Clinton," who unsuccessfully ran against Trump for the presidency in 2016, the website called "Real Raw News" claimed:

The chant “lock her up” has finally seen fruition.

US Navy SEALS loyal to Donald Trump raided Hillary Clinton’s Chappaqua, NY estate and arrested her on charges of treason, destruction of government property, and aiding and abetting the enemy, Real Raw News has learned.

The arrest happened on Tuesday night, according to a source in Trump’s orbit, only hours after Trump had spoken to Rear Admiral Hugh W. Howard at US Special Operations Command and given him a “mammoth trove” of evidence of Clinton’s criminality dating back to her days at the State Department.

Citing only the unnamed source, the post alleged eight members of a "Naval Special Warfare Group" broke into Clinton's home, found her rehearsing a speech in a mirror, and used a tranquilizer dart to sedate her. "[Trump's team] had been surveilling Clinton a long time, and he knew she was always alone on Tuesday nights. That’s when the SEALS nabbed her,” our source supposedly said.

The post appeared to be fan fiction inspired by some Trump supporters' long-stemming petitions for Clinton's prosecution.

First, at the time of the alleged arrest, Trump did not have authority to direct any federal department or branches of the country’s armed forces, including the SEALs, because his successor President Joe Biden had taken the presidential oath of office roughly one month prior. That inauguration stripped Trump of his abilities to help coordinate military operations as the country's commander in chief.

Next, no evidence supported any of the post's claims regarding Clinton's purported detainment.

Hypothetically speaking, if the undercover operation had indeed taken place, it is unlikely that "Real Raw News" would be the first to report the significant development in the news media. Even if it was the first, more established news organizations, including Fox News, BBC, The Associated Press, and Al Jazeera, would at least mention, if not significantly highlight, the news with one or more stories on their websites or broadcast programs.

Additionally, the official Twitter accounts for Clinton and her political allies remained active, as this writing, with no indication that she had been arrested. Nothing on websites outlining her political agenda mentioned the alleged detainment. If the post's claims had been true, Clinton's circle of high-profile Democratic supporters would no doubt issue statements or hold news conferences in response to her arrest.

In sum, no, Clinton was not arrested by Navy SEALs in March 2021 for any reason, including treason.