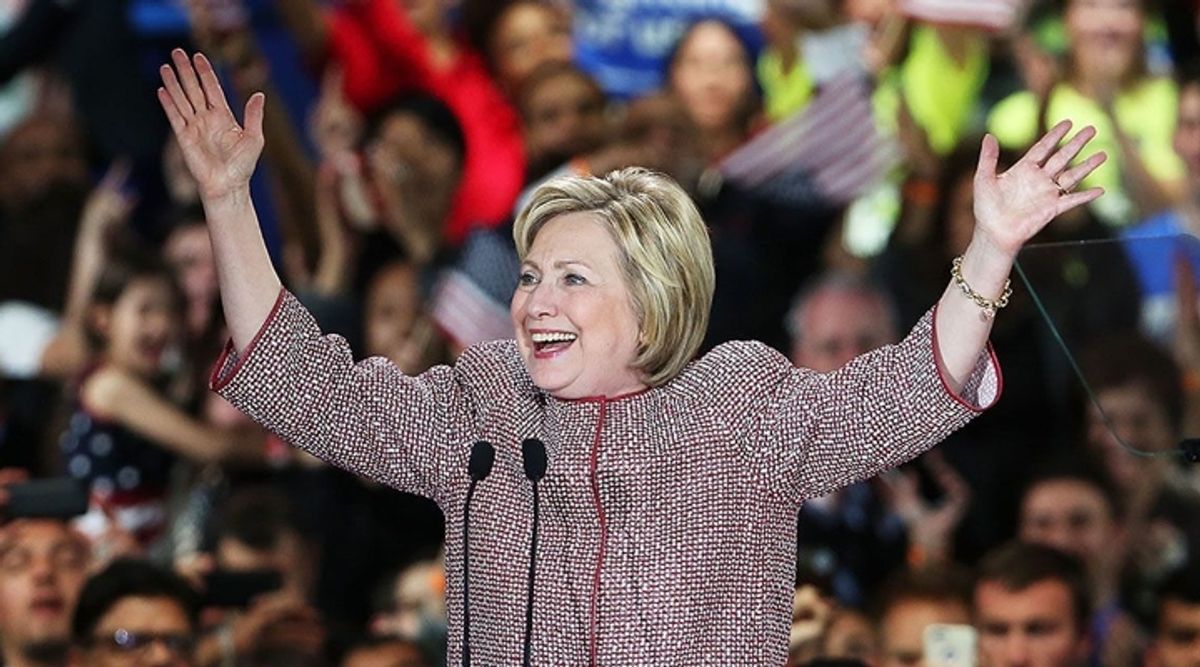 Hillary Clinton wore an Armani jacket priced between $7,000 and $12,000 in April 2016, and the sartorial choice became an issue several months later after a New York newspaper reported on it.

The jacket was several thousand dollars less expensive than reported and was not worn during a speech on "income inequality."

In early June 2016, Facebook users widely shared articles that reported that Hillary Clinton wore a $12,495 Giorgio Armani jacket to deliver a speech on income inequality. The claim's undercurrent was that Clinton's interest in the plight of middle-class Americans was visibly superficial.

Interest in the claim began with a  New York Post article that focused not on the jacket, but on Clinton's general wardrobe choices on the campaign trail. Its title referenced the "surprising strategy behind Hillary Clinton’s designer wardrobe," and the piece began by noting that Clinton's appearance and style have been publicly scrutinized and mocked for decades:

Hillary Clinton’s New York primary victory speech in April focused on topics including income inequality, job creation and helping people secure their retirement. It was a clear attempt to position herself as an everywoman.

But an everywoman she is not — she gave the speech in a $12,495 Giorgio Armani tweed jacket.

The polished outfit was a stark contrast to the fashion choices Clinton has made in the past. As first lady, Clinton wore frumpy pastel skirtsuits. As New York senator and secretary of state, she attempted a more serious look, wearing pantsuits in a rainbow of colors — so mocked that they sparked memes. In comparison to Michelle Obama, who’s become known as a style icon during her time in the White House and appeared on the cover of Vogue twice, Clinton has never been able to nail down a personal aesthetic that works for her.

The article speculated (but didn't confirm) that Clinton paid full price for the clothing and did not wear it on loan from its designers. The paper also suggested that Clinton's fashion choices negatively affected her public perception in the past.  The cost of men's suits worn by fellow politicians didn't appear in the article for contrast:

It’s a marked shift from Clinton’s 2008 run, when she regularly recycled outfits such as blue-and-tangerine pantsuits from DC-based designer Nina McLemore. But just like Clinton’s fashion choices of the past, the makeover could turn out to be divisive. On one side will be those who say it’s an appropriate expense for Clinton, given that she’s in the unprecedented position of running for president as a woman — and looking the part is crucial to her success. On the other side are those who will see her spending as being out of touch with her message.

Not long after Clinton's 2016 campaign looks were dissected by the Post, a litany of items condensed the article to a single headline:

It's true that the jacket was from Giorgio Armani's collection and bore a list price of $12,495. But on 8 June 2016 the jacket's actual retail price was $7,497, and the jacket can now be had for about one-third of that list price.

The Post speculated that Clinton paid for the clothing out of pocket, but the web site Fashionista in turn said that might not necessarily be the case:

The Post also posits that Clinton must be spending her own money on all these clothes, as no designer is taking credit for dressing her as they do with First Lady Obama; with Anna Wintour backing her campaign, it would not be outrageous to think that designers might also be quietly gifting clothing to Clinton. (The Post also attacks Clinton's style by mentioning that Michelle Obama has nabbed the cover of Vogue twice; it would be worth noting that Clinton has her own cover of Vogue, for which she wore Oscar de la Renta.)

It's unclear whether Clinton purchased expensive clothing for such major appearances (such as her New York speech in April 2016), and it's possible she was loaned articles of clothing to wear by major designers.  Stylists Jennifer Rade and Rebecca Klein of Media Style told CNBC that no matter what Clinton did, she would be criticized for her sartorial choices:

But Clinton is "damned if she does, damned if she doesn't," said Rade. If Clinton were to wear a lower priced wardrobe, she would be criticized for not wearing the same caliber of clothing as her competitors.

"It's not appropriate for the forum," Klein said. "She is a presidential candidate. That would be disrespectful. ... She is dressing for the occasion."

A June 2014 Associated Press article examined the matter of the contents of White House closets, noting that as an issue, the debate went back at least as far as Mary Todd Lincoln. The outlet noted that some clothing was gifted to Michelle Obama under specific circumstances:

In recent weeks, Mrs. Obama has turned heads with a forest-green Naeem Khan dress [and] shimmered in a silver Marchesa gown ... her flowered shirtdress for a Mother's Day tea at the White House (recycled from an earlier event) hit the just right note for an audience of military moms.

It takes money to pull that off, month after month. Those three dresses by themselves could add up to more than $15,000 retail, not to mention accessories such as shoes and jewelry.

Is it the taxpayers who foot the bill? No. (Despite what critics say.)

Is it Mrs. Obama? Usually, but not always.

Does she pay full price? Not likely.

Does she ever borrow gowns from designers? No.

The financing of the first lady's wardrobe is something that the Obama White House is loath to discuss. It's a subject that has bedeviled presidents and their wives for centuries. First ladies are expected to dress well, but the job doesn't come with a clothing allowance or a salary.

Here's how Joanna Rosholm, press secretary to the first lady, explains it:

"Mrs. Obama pays for her clothing. For official events of public or historic significance, such as a state visit, the first lady's clothes may be given as a gift by a designer and accepted on behalf of the U.S. government. They are then stored by the National Archives."

Now, we all know—we all know many people who are still hurting. I see it everywhere I go. The Great Recession wiped out jobs, homes, and savings, and a lot of Americans haven’t yet recovered. But I still believe with all my heart that as another greater Democratic President once said, there’s nothing wrong with America that can’t be cured by what’s right with America. That is, after all, what we’ve always done. It’s who we are. America is a problem-solving nation. And in this campaign, we are setting bold progressive goals backed up by real plans that will improve lives, creating more good jobs that provide dignity and pride in a middle class life, raising wages and reducing inequality, making sure all our kids get a good education no matter what zip code they live in, building ladders of opportunity and empowerment so all of our people can go as far as their hard work and talent will take them.

Let’s revitalize places that have been left out and left behind, from inner cities to coal country to Indian country. And let’s put Americans to work rebuilding our crumbling infrastructure, including our failing water systems like the one in Flint, Michigan. There are many places across our country where children and families are at risk from the water they drink and the air they breathe. Let’s combat climate change and make America the clean energy superpower of the 21st century. Let’s take on the challenge of systemic racism, invest in communities of color, and finally pass comprehensive immigration reform. And once and for all, let’s guarantee equal pay for women.

After the Republican National Convention (RNC) in July 2016, Hillary Clinton's infamous Armani jacket was again negatively compared to the dress worn at the convention by GOP nominee Donald Trump's daughter Ivanka, an item of clothing (from Ivanka's own label) that retails for $158. Trump's wife Melania, however, opted for a pricier Margot dress by Roksanda, which retails for $2,190