East Liverpool, Ohio, police posted a photograph of two adults who were passed out in their car, reportedly from overdosing on heroin, with a child in the back seat. 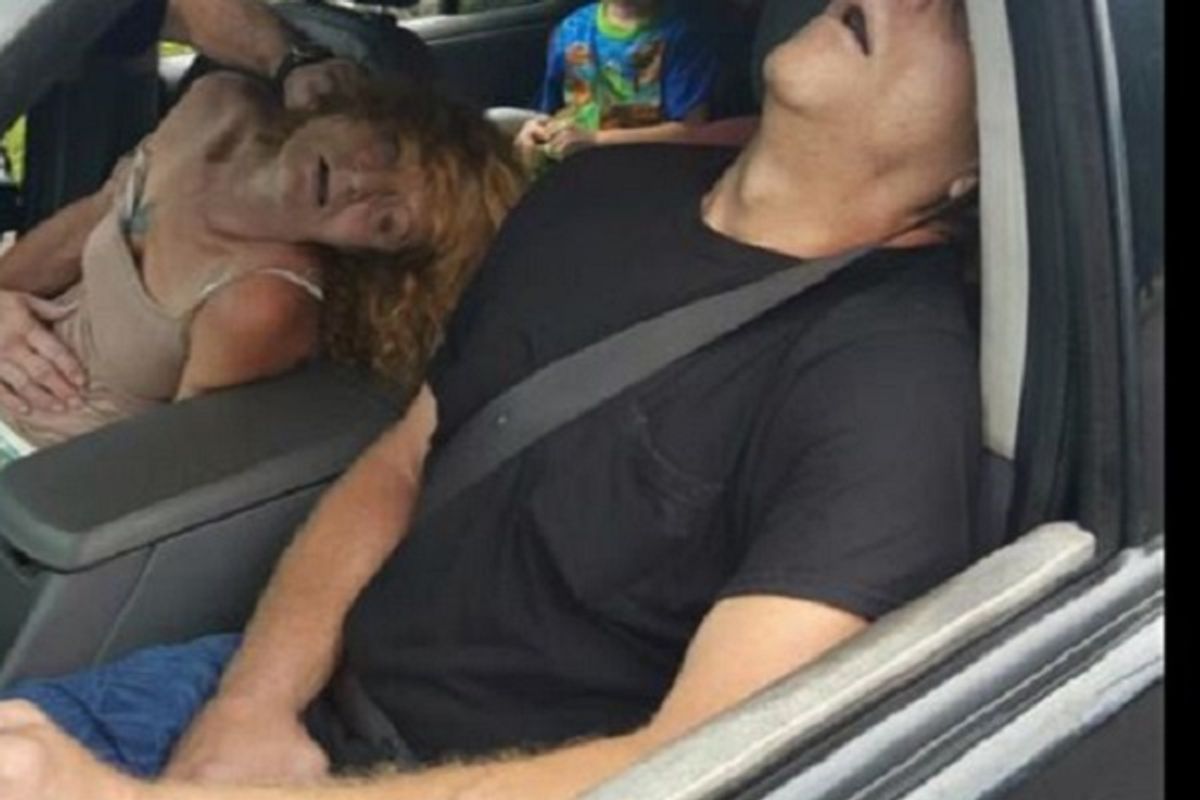 Claim:
A photograph taken by a responding police officer shows a couple passed out in their vehicle from a suspected heroin overdose, with their child in the back seat.
Rating:

On 9 September 2016, a photograph of two adults passed out in the front seat of their car with a small child in the back seat hit social media. The photograph is legitimate and was taken by an East Liverpool, Ohio, police officer who had stopped the car after seeing it being driven erratically.

The city of East Liverpool posted pictures showing the driver and an adult passenger, James Acord and Rhonda Pasek respectively, looking extremely pale, limp and unconscious in the front seat of the vehicle. A little blond boy can be seen behind them in the back seat: Brian Allen, the city's director of public safety, confirmed to us that the photograph is real. Both adults survived and have been charged with crimes, and the child has been taken into protective custody. Acord has been convicted of operating a vehicle under the influence and Pasek has been charged with child endangerment and drug use, Allen told us. Acord and Pasek were presumed to have been under the influence of heroin, but blood test results are still pending.

The city posted the photograph and a copy of the incident report to their official Facebook page with the following cautionary message:

We feel it necessary to show the other side of this horrible drug. We feel we need to be a voice for the children caught up in this horrible mess. This child can't speak for himself but we are hopeful his story can convince another user to think twice about injecting this poison while having a child in their custody.

According to the report posted by the city, on 7 September 2016, just after 3 p.m. local time, Kevin Thompson, a police officer for the city of East Liverpool, noticed a dark Ford Explorer driving erratically toward a bus full of schoolchildren. After the car skidded to a stop, it drifted a little before coming to a stop again. Thompson wrote in his report that he had to turn off the engine and take the keys out of the ignition to prevent the driver from continuing on.

Thompson said when he tried talking to Acord, his head was bobbing, his pupils were pinpoint, and his speech was slurred. Thompson wrote that Acord said he was attempting to take Pasek to the hospital, but during the conversation, Acord went totally unconscious. Thompson noticed Pasek was turning blue and tried to assist her while he called for an ambulance. Thompson also wrote that he saw paramedics administer the anti-narcotic Narcan, which enabled both adults to regain consciousness before they were transported to the hospital.