Herman Cain, Ben Shapiro: Is This an Authentic Image from Newsmax Broadcast?

Newsmax supposedly listed the men's names and headshots above a chyron that suggested they were among "Black conservatives" who leftist Americans considered "to be traitors." 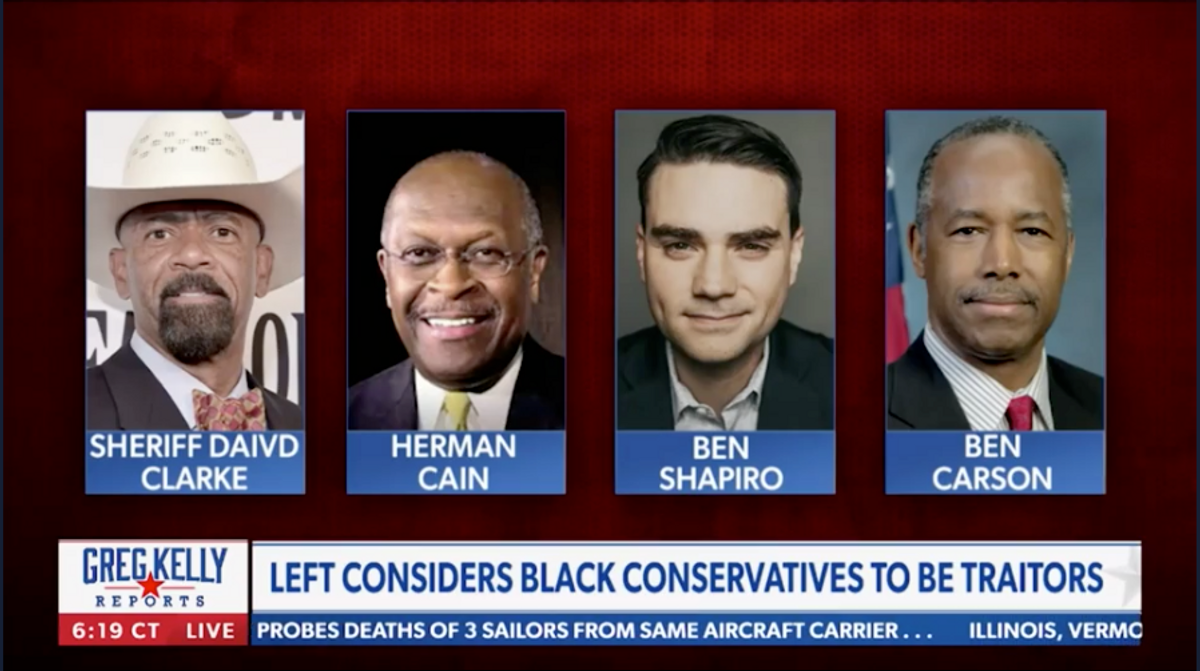 Newsmax indeed aired the headshots, and listed the names of Clarke, Cain, Shapiro, and Carson above said message. However, host Greg Kelly made clear in his spoken remarks (as the visual displayed on screen) that Cain was dead and Shapiro was not Black.

On April 20, 2022, Snopes came across the below-displayed tweet that claimed Newsmax aired an image that supposedly displayed the names and headshots of four people under a chyron that suggested they were "Black conservatives" whom left-leaning Americans apparently considered "to be traitors." The tweet was authored by Jason Campbell of Media Matters for America, a left-leaning media researching group, shortly after 7 a.m. Over the course of hours, it had received almost 29,000 "likes" and 3,800 retweets (and counting), with many observers noting that Shapiro is white and Cain died in July 2020 after battling COVID-19.

The tweet depicted an authentic visual moment from the conservative news outlet, though omitted the fact that concurrent audio (the host speaking) made clear that Cain was dead and Shapiro was white. Considering those facts, which we outline in detail below, we rate this claim "True."

First, we went to Newsmax's website, where it archives recent video segments. We found the clip in question: a segment that aired the day prior on host Greg Kelly's show, titled "Greg Kelly Reports."

Around the 13-minute mark, the program showed footage of former President Donald Trump at a South Carolina rally, where he criticized an unspecified group of news outlets for "not getting it" — supposedly in reference to racial inequality in the U.S. Then, Kelly said:

"You can watch hours upon hours, centuries, actually, of the fake news ... and not learn a damn thing about what's really happening in terms of race in America, in my opinion. They're having a silly, foolish conversation about race to avoid having a serious, impactful one to actually help people."

Instead of turning to mainstream news outlets for updates on the era's ongoing civil rights movement, Kelly advised viewers to listen to actor Chris Rock and showed a years-old skit by the comedian titled, "How Not to Get Your Ass Kicked by the Police." Then, the Newsmax host called attention to the death of Patrick Lyola, a 26-year-old Black man who was fatally shot by a white officer in Grand Rapids, Michigan, and shared what he supposedly considers to be advice to avoid poverty and/or incarceration. As he spoke those words, the screen displayed the messages: "A SERIOUS CONVERSATION ABOUT RACE" and "LYOLA WOULD BE ALIVE IF LISTENED TO CHRIS ROCK" and "GO TO SCHOOL, GET MARRIED & HAVE KIDS."

Soon after that, the screen showed clips of Democratic politicians — which included U.S. President Joe Biden and U.S. Rep. Ayanna Pressley — talking about systemic racism and its existence throughout U.S. history. Among them was Yasmin Vossoughian, an MSNBC anchor.

After that, the screen indeed depicted the headshots and names of Clarke, Cain, Shapiro, and Carson, all above a chyron that read: "LEFT CONSIDERS BLACK CONSERVATIVES TO BE TRAITORS." Meanwhile, Kelly said verbatim, according to the video:

I wonder what Yasmin would do, and any of those other people, when they meet a Black conservative. They're out there, but they're shunned because, boy oh boy, what they have to say. And the late Herman Cain and, of course Ben Shapiro — not Black but one of the heroes of the movement. This really disrupts the narrative, and that's why they are marginalized, and they shouldn't be. They should be celebrated and listened to.

In sum, it was true that Newsmax aired the headshots, and listed the names of Clarke, Cain, Shapiro, and Carson above the in-question chyron. However, simultaneously, host Greg Kelly made clear in his spoken remarks that Cain was dead and Shapiro was not Black.