Are Hells Angels Heading to Seattle To Fight Antifa?

This incendiary rumor was supported by little more than unfounded claims and unrelated videos. 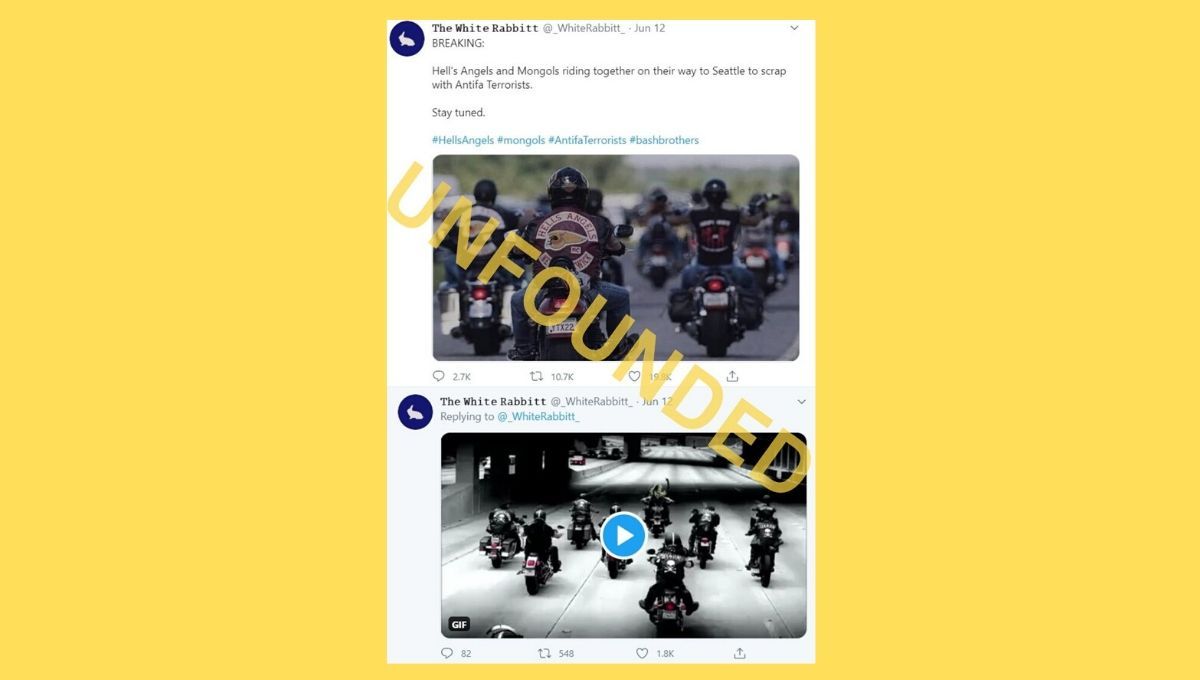 Claim:
The Hells Angels Motorcycle Club was headed to Seattle in June 2020 to fight antifa.
Rating:

In June 2020, a rumor started circulating on social media that the Hells Angels Motorcycle Club was heading to Seattle, Washington, to fight antifa, or anti-fascists, in the city's Capitol Hill Autonomous Zone (CHAZ), a so-called "cop free" area that was set up amid widespread protests against police brutality and racial injustice: But no evidence has been provided to support this claim. The media included in the above-displayed tweets is a few years old, and Sonny Barger, the founder of the Hell's Angels, has issued a statement refuting this rumor.

The top image was taken in 2018 as members of the Hells Angels rode to a national gathering in Quebec, Canada. The brief clip included in the second image comes from a 2011 music video by Lady Gaga:

Similar videos purporting to show the Hells Angels "on their way" to Seattle to fight anti-fascist protesters can also be traced back to old and unrelated events. One video posted to YouTube in June 2020, for example, claimed that it showed "Hell’s Angels and Mongols riding together on their way to Seattle to scrap with Antifa Terrorists," but actually used footage from 2010.

Sonny Barger, the founder of the Hells Angels, dismissed these rumors in a Facebook post on June 13, 2020, in which he wrote:

"People have asked me about these fake articles involving the Hells Angels and another club going to face antifa. Stop, It's untrue and will never happen."

Motorcycle clubs are frequently used in online hoaxes attempting to show how right-leaning causes have the support of "tough" individuals. While there truly is a "Bikers for Trump" group that has showed support for the president at various rallies and events, the support and influence of these motorcycle groups has been wildly exaggerated in social media posts.