A mother's viral Facebook post reported that the 15-year-old girl was missing from her home in Orange, Texas. 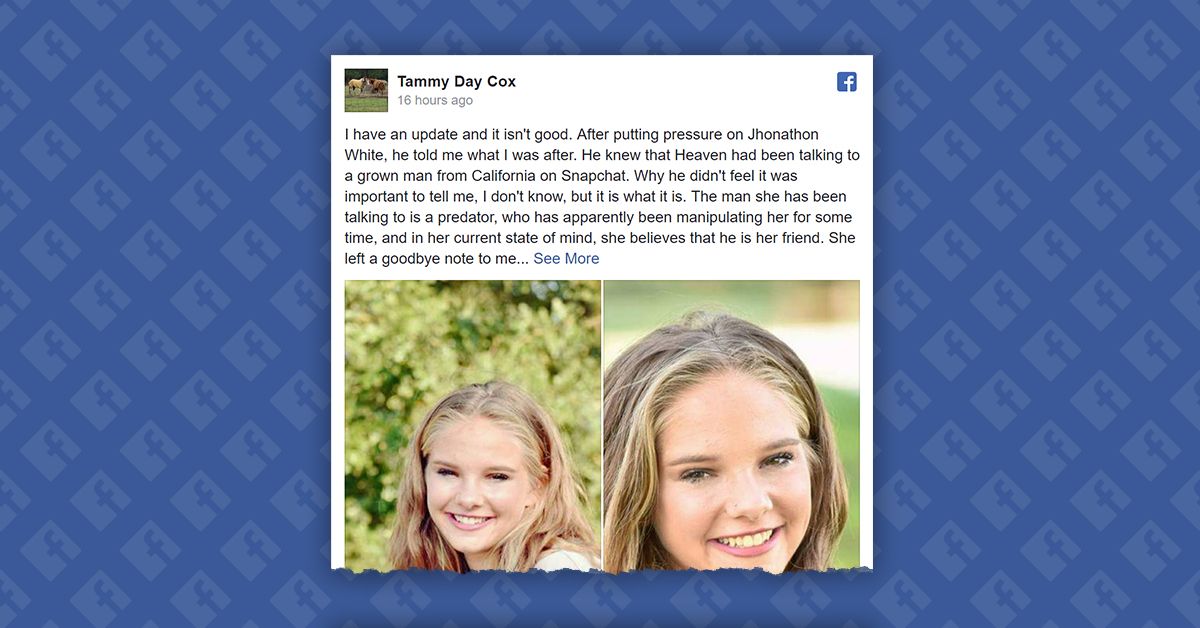 On 28 November 2017, a woman named Tammy Day Cox shared a status update on Facebook that said her 15-year-old daughter Heaven Ray Cox had run away from her home in Orange County, Texas.

I have an update and it isn't good ... [An individual said] that Heaven had been talking to a grown man from California on Snapchat. Why he didn't feel it was important to tell me, I don't know, but it is what it is. The man she has been talking to is a predator, who has apparently been manipulating her for some time, and in her current state of mind, she believes that he is her friend. She left a goodbye note to me and her Dad, and said that she wouldn't have a phone, so I'm sure he has taken it from her, as it isn't here, and I have torn her room apart. She is off her meds and is in a manic phase of bipolar disorder. I am asking everyone to share this to their wall, and particularly those who live in California and every state between there and Texas. This man told her that he would be in San Antonio for Thanksgiving and that he would pick her up. Please share the following:

This is Heaven Ray Cox, a missing child. She is 15 and may be in the company of a man much older than her. He is a predator who manipulated her online into believing that he is her friend. She suffers from mental illness and is currently in a manic phase due to being off of her medication. Please share this with everyone you know on Facebook, but particularly those who live in California, or the states between Texas anf California. She is 5'3, blonde hair and brown eyes, and weighs approximately 113 pounds. She is petite and pretty, and will stand out in a crowd. We need to bring her home, as we believe she is in grave danger. If you see her, please call the your local authorities, and give them any information that you have. Have them call the Orange County Texas Sherriff's office at (409) 883-2612. I will post an update if she is found, but please keep posting until you know she is safe. Thank You!

The post was shared three quarters of a million times in under 24 hours, prompting widespread interest in whether Heaven Ray Cox was missing and endangered. We contacted the Orange County Sheriff's Office in Texas to confirm whether Cox's post was accurate; they told us that Heaven Ray Cox had run away from home, and that an investigation is ongoing.

Heaven was found and returned to her family on the evening of 30 November 2017.

Updated [1 December 2017]: Changed status to reflect the fact that Heaven was found.