The 38-year-old's death from complications of influenza became an internet cause célèbre after it was rumored that she couldn't afford lifesaving medication. 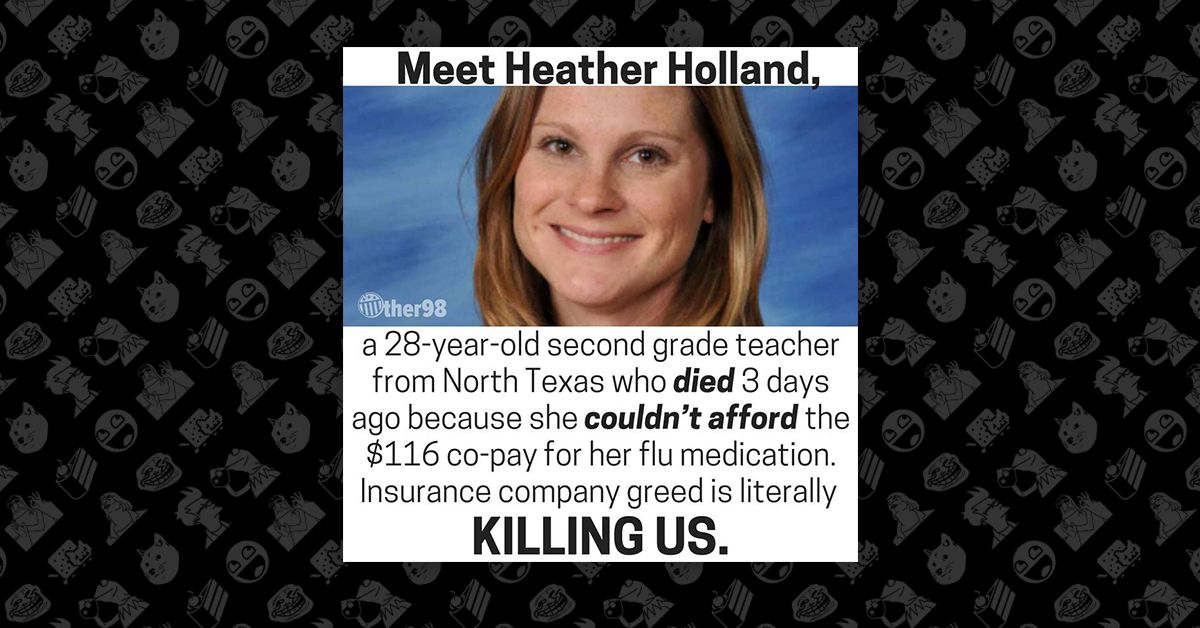 Among the casualties of the 2017-2018 flu season (a season described as especially severe by federal health officials) was a second-grade teacher from Willow Park, Texas. Heather Holland, who died of influenza complications on 4 February 2018, was an otherwise healthy 38-year-old who left behind a husband and two young children.

Unlike most of the other flu victims who died this flu season, however, controversy around high medical costs meant Holland's death became an instant cause célèbre and went viral on social media. As the story would be retold with false nuance on the internet, Holland's real killers were greedy pharmaceutical companies who over-priced the potentially life-saving medication to a cost beyond her means.

The text of the meme reads as follows:

Meet Heather Holland, a 28-year-old second grade teacher from North Texas who died 3 days ago because she couldn't afford the $116 co-pay for her flu medication. Insurance company greed is literally KILLING US.

Besides getting the victim's age wrong (she was 38, not 28), in claiming that Holland "couldn't afford the $116 co-pay," the meme's author botched another crucial detail of her story.

According to statements by Holland's husband quoted in the Wall Street Journal, she did balk at the price of the medication, a generic version of Tamiflu, and delayed filling the prescription for that reason. However, it was not because the family couldn't afford it.:

Ms. Holland went to the pharmacy. She learned the antiviral medication would cost her $116 under the prescription-drug coverage she had as a teacher, and she refused it. They had the money, Mr. Holland said: “It’s principle with her. She’s a very frugal person in general, always has been.”

After bringing their children home from church that night, Mr. Holland discovered his wife was taking Nyquil, he said. She told him she thought the price of the antiviral was ridiculous. He went to the pharmacy Thursday morning and got it filled himself. “I made her start taking it,” he said.

Frank Holland did express the view that the co-pay for the medicine was too high, though he blamed his wife's employer-provided insurance coverage for that shortcoming, not the pharmaceutical companies:

Looking back, he said, he wished she and other teachers had better drug coverage, given their exposure.

Despite the meme's inaccuracies, it raises a legitimate concern. The cost of prescription drugs in the United States is much higher than what consumers are charged in other countries. That can have life-or-death consequences, especially for people who are under-insured or have no health coverage at all. According to a 2015 study, Americans pay three to 16 times more for top-selling prescription medications than do people in countries where drug prices are subject to some form of government control.

Just days before Holland's death, President Donald Trump announced a government initiative aimed at addressing what he termed the "injustice" of high prescription drug prices (an issue previously taken up by his Democratic rivals in the 2016 presidential campaign).

The details of Trump's proposal, which eschews broad price controls in favor of accelerating the FDA's drug approval process, tweaking Medicare drug policies, and incentivizing other countries to raise prices to a level such that the U.S. market isn't overburdened with innovation costs, are laid out in a February 2018 white paper.