Did Ohio Replace Lethal Injection with a Head-Ripping Machine? 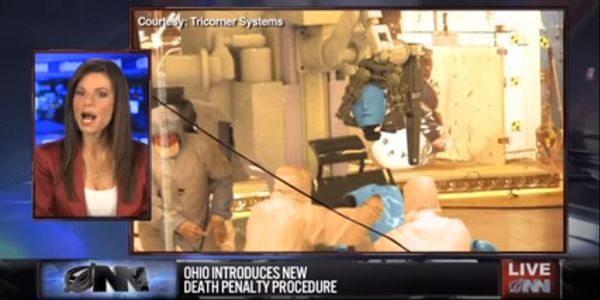 Claim:
The state of Ohio has replaced lethal injection with a head-ripping machine as a form of execution.
Rating:

On 20 May 2014, the Onion website posted an ONN (Onion News Network) news video reporting that the state of Ohio, "facing mounting objections that lethal injection is cruel and outdated," had replaced lethal injection as a form of execution for condemned prisoners with a head-ripping machine that "quickly and humanely rips off the heads of death row inmates":

Soon afterwards, links to versions of this video were being shared via social media, with many of those who encountered the realistic-looking report mistaking it for a genuine news clip without realizing that it originated with the venerable Onion, one of the oldest and best known satirical publications in the U.S.

The Onion not only publishes satirical articles spoofing current events on their web site, but they also operate the daily Onion Radio News newscast and produce faux news videos for their Onion News Network, the last of which was the source of the news clip linked above.