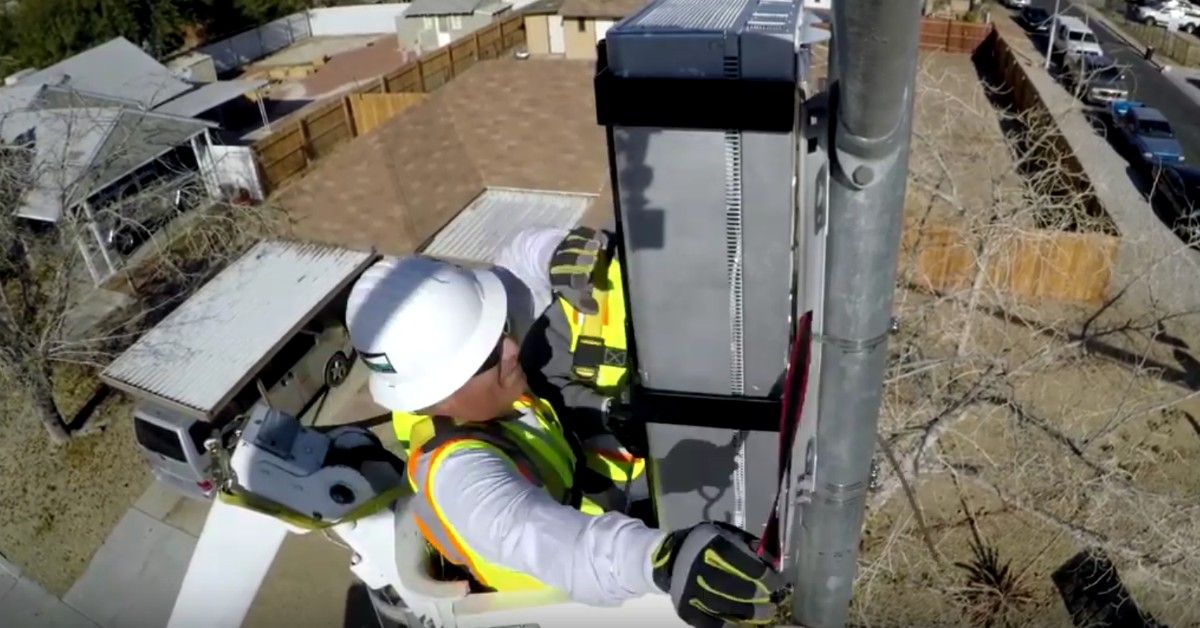 Claim:
People working with 5G equipment are required to use hazmat suits to protect themselves against radiation.
Rating:

The internet is awash with conspiracy theories that allege 5G cellphone networks pose health risks that world health officials are hiding from the general public. In support of that assertion, a meme suggested that the installation of a 5G cellphone tower requires those performing such installations to wear “hazmat radiation suits” to protect themselves: Scientifically, this claim makes zero sense. While cell towers in general do use electromagnetic radiation (in this case radio waves) to transmit data, that form of radiation is non-ionizing — a classification of radiation that “includes visible light, heat, radar, microwaves, and radio waves" and “does not have sufficient energy to break molecular bonds or remove electrons from atoms,” according to the U.S. Nuclear Regulatory Commission. As a result, as stated at Cancer.org, these forms of non-ionizing radiation do not directly damage the DNA inside cells, “which is how stronger (ionizing) types of radiation such as x-rays, gamma rays, and ultraviolet (UV) light are thought to be able to cause cancer.”

In short, the worker pictured here is wearing a suit that would not protect against the harm alleged to be caused by a 5G cellphone tower, and therefore the picture is of questionable utility in documenting the unfounded claim that such a tower secretly emits ionizing radiation.

As for the image itself, it appears to have originated with a 6 May 2019 post to the Instagram page "theorgonizedearth." That page, which dabbles in pseudoscience and pushes an anti-vaccination narrative, provided no additional details about where and when the photograph was taken. Furthermore, the claim that the pictured person is wearing a hazmat suit seems to be based solely on what can be observed in the image.

In other words, this claim is based on an assumption of what the image shows. And while this image may appear at first glance to some as if it captures a person in a hazmat suit working on a 5G tower, blurry photographs of faraway objects rarely constitute credible evidence.

Although we haven't been able to pinpoint exactly what is going on in this scene, Scott Krouse, director of the National Association of Tower Erectors' (NATE) Wireless Industry Network (WIN), agreed that this worker was wearing a Tyvek suit. Krouse also told us that cell-tower workers were not required to wear hazmat suits while working with 5G equipment, and that the cell tower featured in this viral image wasn't even a 5G tower:

No, cell tower workers do not have to wear hazmat suits when working with 5G equipment.

No, cell tower workers do not have to wear anything special for 5G that they didn't wear for 3G or 4G.

In the attached photo, the worker is standing in a man-lift, fully tied off for safety, holding some time of wand. He could be painting, but most likely he is cleaning bird dung off the monopole. Therefore, the need for a Tyvek suit to prevent back-splash onto his skin and clothing. As you can see, this is a 'mono-palm' disguised to look like a palm tree. These poles are very popular with nesting birds and over time their droppings become quite abundant. For safety and health reasons, they are cleaned.

This is not a 5G tower. This appears to be a standard 4G tower based on the antennas mounted to it.

Again, this is most likely a standard Tyvek suit to protect the worker from either paint mist and over-spray or back splash while cleaning bird dung from the structure.

Hazmat suits are not required while working with 5G equipment. In fact, we found several videos and photographs of workers installing 5G equipment without being wearing such suits:

Not only did we find several other videos and photographs of technicians working with 5G equipment without hazmat suits, but our search for any similar media showing 5G workers with hazmat suits on came up empty-handed, with the exception of the questionable meme posted above.

We've reached out to CTIA, a trade association representing the wireless communications industry in the U.S., and the National Association of Tower Eractors (NATE) as well as several wireless companies, and we will update this article when more information becomes available.

Cancer.org.   "Microwaves, Radio Waves, And Other Types of Radiofrequency Radiation."     Retrieved 15 May 2019.