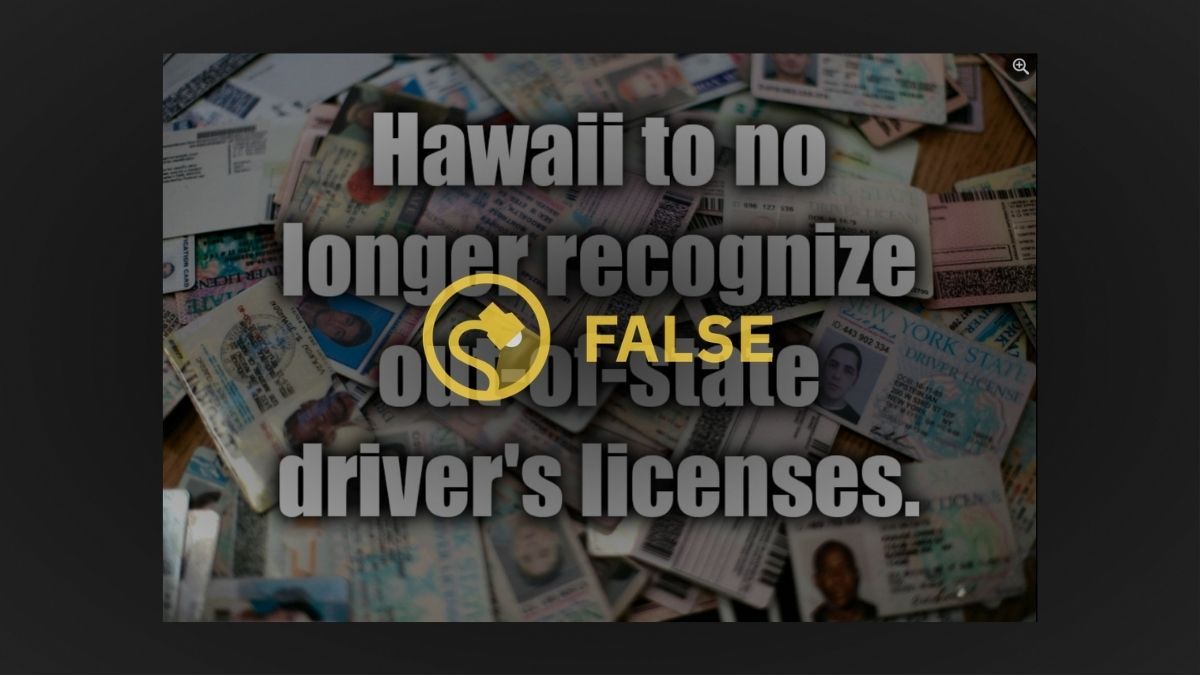 Image Via The State of Hawaii/Facebook

Claim:
Starting Jan. 1, 2023, the state of Hawaii will no longer accept out-of-state driver’s licenses for visitors and new residents. They'll have to apply and take a new driving test before they can rent a vehicle and drive.
Rating:

A June 15, 2021, a Facebook post made an outlandish claim about driver’s license requirements in the state of Hawaii.

The post claimed that starting Jan. 1, 2023, the state would no longer accept out-of-state driver’s licenses and would require a test for anyone coming in as a visitor or a new resident.

A page called “The State of Hawaii,” which was not an official government page, was behind the posting. It also criticized bad drivers from other states:

A vast majority of accidents occurring on Hawaii's roads are caused by people that didn't learn to drive here. They don't understand the mentality of Drive with Aloha that is taught in our driving schools.

To alleviate this problem, starting January 1st, 2023, Hawaii will no longer recognize driver's licenses issued by other states. Many states do not require any minimum instructional driving time or written testing before issuing drivers' licenses.

These lax requirements lead to drivers who don't know how to drive safely and are often drive recklessly. 46% of all speeding tickets issued are to people with licenses from California, Florida, and New York.

Visitors and new residents who wish to drive here will be required to apply for a driving test to be administered on arrival before they are allowed to rent a vehicle. A new DMV office will be opened in all state airports to provide testing to visitors and new arrivals.

Those requiring testing will be able to visit the DMV website to learn about the requirements and receive practice instructions before arriving. Anyone failing the test will be prohibited from retesting and/or driving in the state for 30days.
Driving in Hawaii is a privilege, and if you cant prove you're able to do so safely, then you won't be able to drive here when visiting.

There are plenty of reasons to doubt this post's claims, not least of which is the fact that “The State of Hawaii” Facebook page is classified as an “Entertainment Website.”

But to be sure, we called the county of Hawaii Driver Licensing office. An automated message said, “You may drive in the state of Hawaii with a valid driver license issued by another state if you are 18 years of age or older.”

We also called the Public Affairs Office at the Department of Transportation. A spokesperson there told us this Facebook post is inaccurate and there are no such restrictions forthcoming.

We could find no evidence of such a rule on Hawaii’s official government websites and DMV websites.

As such we rate this claim as “False.”